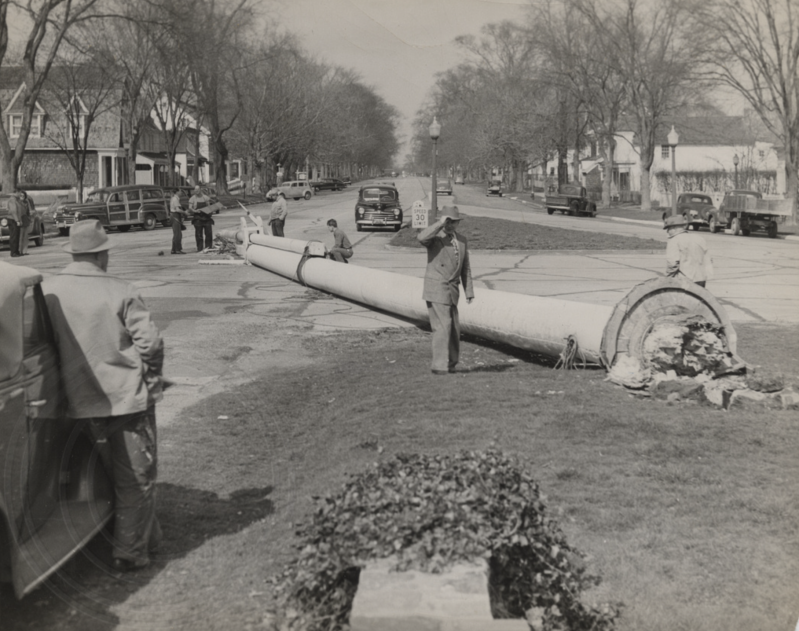 The village flagpole went down in high winds on April 6, 1949. (The big golden eagle, reported The Star, "rolled into the gutter on the west side of Main Street, close to Mrs. Morton Pennypacker's parked car."). East Hampton Star archive
By Bess Rattray

You might be from East Hampton if you pronounce Ashawagh Hall as “Ash-uh-wah” not “Ash-uh-wog.” If you pronounce Amagansett with a “sett” at the end, not a “zett.” If you still include the Crystal Room, Gertz department store, or the bowling alley in your driving directions, even though those places vanished years ago. If you take elaborate detours off the Sag Harbor Turnpike in order to avoid having to bang a left on Main Street by the flagpole. If you know which flagpole I’m talking about. If you still prefer to call it “the Sag Harbor Turnpike,” even though that name confuses people, so you just pack it in and say “One-fourteen.”

You might be from East Hampton if you have ever done your grocery shopping after 9 at night to avoid the crowd. If you remember when the Barefoot Contessa worked at the Barefoot Contessa. If you served Lauren Bacall when you had a summer job at a farmers market. If you saw Cheryl Tiegs with Peter Beard at the East Hampton United Artists Cinema. If you ever sneaked into the East Hampton United Artists Cinema via the side door that a friend had left open a crack. If you ever sneaked into the Maidstone Club to swim in the outdoor pool at 2 a.m. If you know someone who drunkenly mock-tried to break into the snack bar at the Maidstone Club pool at 2 a.m.

You might be from East Hampton if you think the western boundary of “the Hamptons” is the Shinnecock Canal. If you didn’t know there was a Hampton Bays until you were in high school. If a big thrill when you were in kindergarten was driving all the way to Southampton to buy doughnut holes from Crutchley’s Crullers. If you are nostalgic for the scent of potato pesticide. If you ever gleaned potatoes from a potato field after the harvesters went through. If you ever stole lilacs in June from the yard of a house only occupied in August.

You might be from East Hampton if you always carry a few beach rocks in the pocket of your winter coat and the cup holder of your car. If you have an inner compass that always knows which way is south, because that’s where the ocean is. If there’s at least three pounds of sand on the floor of your car year round. If you describe where you are sitting on the beach by using the directions “left” or “right” or giving the number of a jetty. If you know better than to run up and down the dunes trampling the beach grass. If you call it beach glass, not sea glass. If you would fight a duel to the death to protect beach-access rights (while at the same time telling anyone willing to listen that the only people who parked trucks on the beach before the Reagan Era were actual working fishermen or yahoos from UpIsland). If you think UpIsland begins at the Shinnecock Canal.

You might be from East Hampton if you have pulled off more ticks than you could possibly count and it never occurred to you to phone the doctor. If you were childishly distressed the first time you went to your traditional cranberry hole and found strangers there picking cranberries. If you still have one secret sledding spot that’s so secret you can only take blood relatives there, and if anyone outside the family ever found out where your secret sledding spot was, you’d have to kill them.

You might be from East Hampton if you call hard clams “hard clams” and not “quahogs.” If you can tell which hard clams are native versus which are the spawn of aquaculture by the tinge and quality of the shell. If you open your own hard clams and don’t have to bring them home from the Seafood Shop pre-shucked and sloshing on ice. If you have a 324 phone exchange.

You might be from East Hampton if you ever came home from the Montauk St. Patrick’s Day Parade with frostbite in three toes. If you learned to swim with the Red Cross at Albert’s Landing. If you say "upstreet" when talking about downtown. If you know Main Street runs North–South, not East–West. If you had childhood insomnia from drinking too much green-box iced tea. If you know what green-box is. If you knew it was really getting late, as you lay in bed buzzing on green-box caffeine, because you could hear the 10:30 Long Island Rail Road train rolling through blowing its whistle. If you know what the Cannonball is. If you know who Chooch was. If you argue with your children about whether the correct nickname is Walks-a-Lot or Sir Walks-a-lot.

You might be from East Hampton if you always called the Lobster Roll “the Lobster Roll” and never did call it “Lunch.” If you call your exterior wood siding “shingles,” not “shakes.” If a “regular coffee” from the deli has milk and two sugars. If you know what Pudding Hill is. If you remember Maggot Mike’s. If you throw your hand into a horizontal peace sign and point to the first knuckle of the lower finger when you are on vacation and someone asks where on Long Island you are from. If you laughed out loud when the Kardashians rented a house in North Sea when they filmed “Kourtney & Khloe Take the Hamptons.” North Sea?!