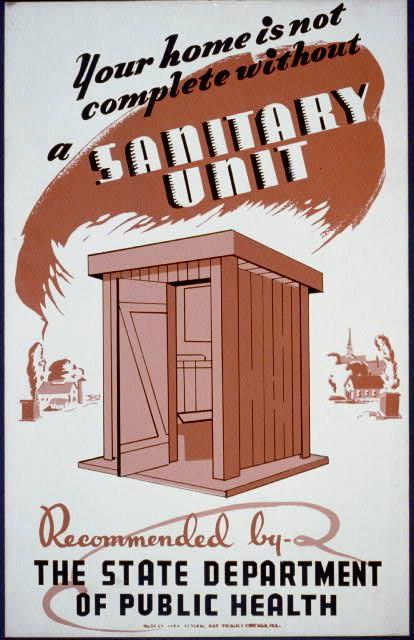 A poster from the Works Progress Administration’s Federal Art Project, Chicago, circa 1936 to 1941.
Library of Congress
By Baylis Greene

“Manhandle it! Gorilla that thing!” Those words from my high school shop teacher rang in my ears as I attacked a stuck basement valve with my trusty spanner. The outdoor shower, it seems, just never stopped leaking, and here came winter.

As with most Americans, high school wasn’t the happiest time for me, although I do think of that one teacher from time to time. Jay Best was his name. He may have lived in Hampton Bays or Shinnecock Hills, and may still, but as I remember it he could do anything — he built and raced race cars; he sailed competitively. So what was he doing teaching shop in the bowels of the Bridgehampton School? I have no idea. Could he have solved my valve problem? With one hand tied behind his back.

As for me, my hatred of plumbing dates to when I had none. Who’s to say how much of it’s left, but back in the 1990s the permafrost around Fairbanks, up north in “the Last Frontier” (kinda overblown), “the Great Land” (yeah, maybe), meant you could rent a no-running-water cabin for 300 bucks a month. You could also shop till you dropped in a Fred Meyer superstore over yonder in town, but out on the outskirts the living was indeed simple. Which is why I stayed there for five years.

How do you get used to hauling five-gallon jugs of water, heating it stovetop for doing dishes, collecting the gray dishwater and slop in a five-gallon bucket under the sink, schlepping it into the woods for dumping when sloshingly full, and using an outhouse? Remarkably quickly. Well, you can add a few ticks to that clock of acclimation when it comes to planting your naked cheeks on a sheet of Styrofoam atop a wood plank with a hole in it when it’s below zero.

What’s more, that mess doesn’t go anywhere in winter. It only freezes atop the growing pile. As for that other bodily function, to avoid adding a sheet of slick and reinforcing ice to what inevitably becomes a spire, you could stop on the back porch halfway to the hole and send a high-arching stream over the side, enjoying the stars and the occasional northern lights in air that practically crackled with cold, but at some point you’d need a snow shovel to break up the newly yellowed embankment.

Those were different times, different problems, tinged with nostalgia at this point. As for the latest one, as they say in football, you have to know when to punt. Right after stripping the nut and just before flying into a rage, I replaced my spanner in its little red toolbox, resolved to call the plumber in the morning, and went for a run.