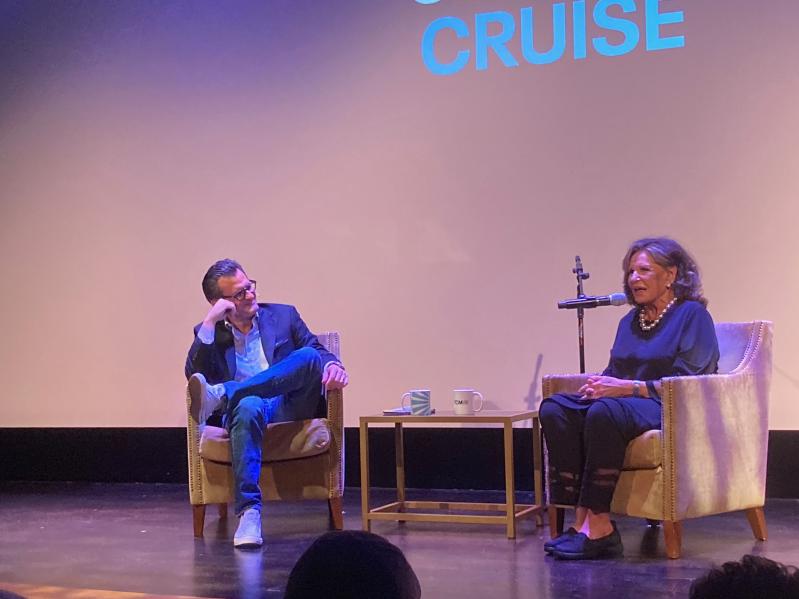 Ben Mankiewicz, TCM host, and the actress Lainie Kazan, before a screening of "My Favorite Year."
Bess Rattray
By Bess Rattray

I’m a bit ashamed to report where I am right now. I am sitting in the Royal Palace restaurant at midship aboard the Disney Dream cruise ship — the shame, the shame! — awaiting the arrival of a plate of smoked-salmon Benedict as an attendee at a five-night film festival at sea, sponsored by the Turner Classic Movies channel, which chartered the boat. We plow along seamlessly, smoothly, under a blazing Caribbean sun, with Cuba to port and Cape Verde far, far, far to starboard, chit-chatting between tables about cinematographers and stars. Everyone at breakfast this morning agrees that “Pennies From Heaven,” the 1981 remake, is so dreadful that it makes you hate Steve Martin by the end, but that the costumes, by Bob Mackie, are pure pleasure.

Bob Mackie is here on the Dream, sailing along with us. He turns out to be only 82 years old; I would have thought he’d be older, associating him as we do with the showstoppers worn by Cher in the 1970s, but, as he informed us from the stage of the Walt Disney Theater on the second night, he only seems older because he got his start extremely young, working for Edith Head at Paramount at 21. Mr. Mackie drew the first sketch of the dress that Marilyn Monroe wore to sing “Happy Birthday, Mr. President” in 1962 at Madison Square Garden. We, the fans, the autograph-seekers, are here to creep closer to the stardust of the past. Mr. Mackie dressed Marlene Dietrich.

Chevy Chase is on the ship, too, making appearances with the assistance of a wheelchair, and Richard Dreyfuss, who is tiny, hoary-haired, and halt.

The Dream is an all-inclusive ship. Between screenings of “The Thin Man” and “Oh, God!” with George Burns (not sailing on the Dream, not younger than anticipated, not alive), we feast on crab legs and shrimp at the Cabanas buffet on deck 11. The only thing you have to pay extra for are the specialty coffees at the Vista Cafe on 4, where I order an iced latte with oat milk each morning and reluctantly exchange banter with the barman, who is from Serbia, but who greets the bleary-eyed with a cheerful “Top of the mornin’ to ya!” The coffee barman from Serbia told me earlier that he used to work for Donald Trump as a beverage manager at a golf club in Westchester.

The name tags inform us where the staff hail from. We are a global assemblage: Pande from Indonesia brought over a tall pepper grinder just now to add a sprinkle to my eggs, but Leasa from Jamaica is our usual server. Ismet from Turkey, the overseer and manager of our entire dining rotation, who holds his hand to his chest as he gives a half-bow, comped a dessert cappuccino last night to my stateroom-mate, who accidentally said out loud that she felt the cappuccino had an incorrect milk-to-espresso ratio.

We are told that the Dream can accommodate 4,000 passengers, but that only 1,800 are on this particular charter voyage. I may be wrong, but it seems obvious what the problem is, attendance-wise: The stars of the Golden Age of Hollywood dim and dwindle, flicker and go out. Then, too, a cruise is incredibly expensive, and movie nerds under the age of, say, 35, generally can’t afford it. (I can’t afford it, either. Not at all. I shouldn’t be here, but I made these plans before Covid, when I was employed far more gainfully. The perilous nature of the enterprise, economics-wise, only deepens the shame of this guilty pleasure, the indulgence in endless over-large meals, the waste, the fuel consumption. The Dream’s fuel-storage capacity is 600,000 gallons. Vijay from India has just removed my egg-smeared plate.)

Eddie Muller, the host of TCM’s “Noir Alley,” wearing a pinstripe suit, told me in the midship elevator last night that the younger movie fans do flock to the film festivals and conferences TCM presents on dry land, which are less prohibitively expensive (and less embarrassing to admit you are attending, cringe-wise). I’d managed to insert myself into a conversation that he was having with a pair of shorts-and-lanyard-wearing film fans about Woody Allen — and the grand question of “Do we separate the artist and his behavior from that artist’s work?” I was cruising past but stopped in my tracks on the marble parquet, did a theatrical walk-backward, and jumped in with my one claim to fame: The lobster scene in “Annie Hall” was filmed in the kitchen of my childhood home in the dunes of Amagansett.

I’m glad I got to pull the “Annie Hall” brag out of my bag of tricks on the TCM cruise, although I must confess I rather wish I’d been able to brag to Ben Mankiewicz, not Eddie Muller. Ben Mankiewicz, with his black hair combed back and his white no-lace Converse sneakers, is the heartthrob of the TCM cruise. He is the network’s main host and the grand-nephew of Joseph Mankiewicz (“All About Eve,” “The Philadelphia Story”). Ben’s here with us on the Dream, along with his wife, Lee, who looks like my sort of people, and their charming 9-year-old daughter, Josie, who co-hosted a round of bingo yesterday in the D Lounge on 4. Ben Mankiewicz went to Columbia Journalism school; if I meet him as we sway along the grand hallways, under the gilded Mickey ears, going aft toward “A Conversation With Lainie Kazan” — no relation, it turns out, to Elia Kazan — I may whip out my “we both went to Columbia” card, but I am not as bold in my celebrity-collaring as many of my fellow passengers. They stand in line to get selfies with Ben, cornering him in the Evolution nightclub after a long day of screenings.

Last night, four retired teachers from San Francisco won gift bags of memorabilia at the “So You Think You Know Movies?” trivia contest hosted by Bruce Goldstein, the repertory programmer for the Film Forum in Manhattan. This is an intense contest featuring cleverly and hilariously edited film clips that is, for die-hards, the highlight of a TCM cruise. The questions are impossible. The easiest was, “How many Frankenstein movies did Boris Karloff appear in?” Answer: five, although he played the mad scientist, not the monster, in “Frankenstein 1970.” And I even got that one wrong, although I did know that Theresa Harris played Barbara Stanwyck’s maid and co-conspirator in the very naughty pre-code drama “Baby Face.”

The public spaces of the Dream — the atrium lobby, done up in Art Deco burgundy and gold, with a statue of Donald Duck, the plush and hush of the Buena Vista Theatre aisles — are filled with piped-in music from classic soundtracks. The true buffs are able to cock an ear and swiftly name not just the movie but the composer. I am not. I’m not that kind of movie buff. The true buffs, the experts, the ultra-nerds, are celebrities in their own right here on the Dream. I recognize Humberto and Beverley from social media, but they breeze past me on their way to the 10:30 a.m. screening of “Design for Living.”

The old hands, the starry-eyed faithful who have gone on every TCM cruise since the inaugural trip in 2011, attend secret-password meet-ups in the Outlook Lounge, raising glasses of the drink of the day, a mai tai, a Bahama Mama, a dark and stormy. The star system prevails.