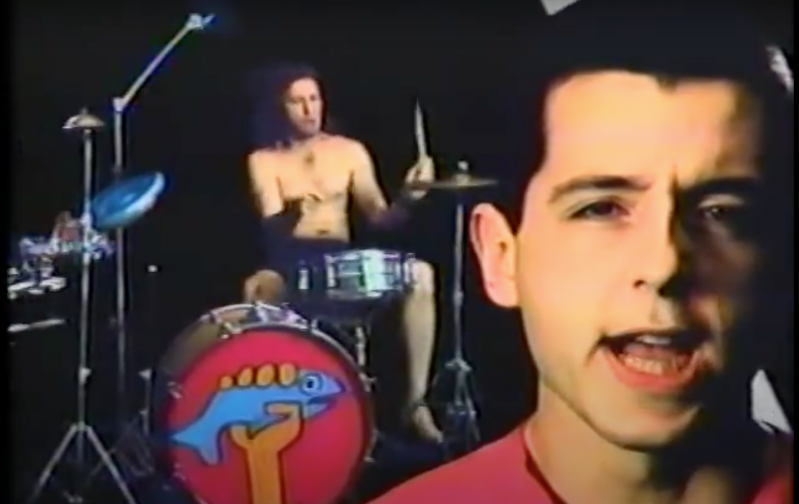 From Dogzilla’s 1989 video for “Lunch With Ed.”
YouTube
By Baylis Greene

It’s almost always a mistake for local media to comment on local media. But really, I’m just a guy who happens to work at The Star, and so I feel free to point out that lately I’ve been tuning in to Brian Cosgrove’s “Afternoon Ramble” on WLIW, which has been enjoyable not for his saint-like patience with some of those painful interviewees, but more because he similarly, musically, likes to live in the past, say, 1987.

There’s a qualitative difference in pleasure between typing names into the YouTube search box and sheer happenstance over the airwaves, as on some otherwise dispiriting drive up the Island you’re brought up short by New Order’s thrumming, thrilling “Love Vigilantes.”

Listening to Cosgrove — also born during the Johnson administration, I’m guessing — I briefly wondered where else I’d catch the bands I’d heard in the go-go ’80s, such as Lone Justice, with a caterwauling Maria McKee, or Big Audio Dynamite, fronted by Mick Jones, once of the Clash, and in those days so innovative. (They sampled spaghetti westerns, for crying out loud.) Or deeper tracks from some of the best-written pop-rock albums of the decade, like Elvis Costello’s “Blood and Chocolate” or Joe Jackson’s thematic “Big World,” his three-sided album recorded live.

I’m a square now, but back then I was a young dude living in Boston, working at whatever job I could find within walking distance, seeing bands, and listening to an alternative radio station out of Lynn (where, coincidentally, the English settlers of Southampton sailed from) the call letters of which I can’t recall and prefer it that way. The airy Cocteau Twins? I was an early adopter.

That was a great time and place for music. But I’ve got to give the faceless YouTube uploaders credit — I thought I’d never again hear the Beantown band Dogzilla’s gleeful dismantling of the compromises we make, “Lunch With Ed,” but it can be called right up: “In the corporate world if you wanna get ahead, you’re going to have to have . . .”

There’s no way that one wouldn’t go over well if brought back on the air. Brian? I’ll be listening.