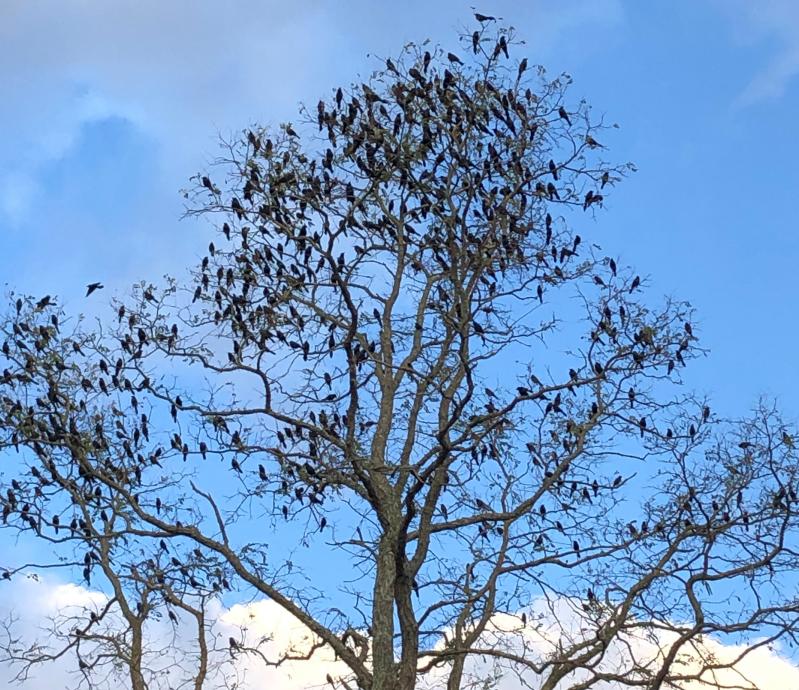 The fall migration comes to your faithful columnist’s property in Noyac.
Baylis Greene
By Baylis Greene

After what felt like two months of forgetting that Agway was there, I finally stocked up on birdseed, dutifully loaded the spring-action Squirrel Buster hanging feeder with 2.6 pounds of a cardinal-friendly blend, carefully replaced it on the jutting rod I’d screwed into a tree trunk back on Father’s Day, and waited.

On cue the Hitchcockian swarm descended — on my gutters. The racket they made as they rifled whatever organic detritus was up there unnerved the dog, who took cover in a far bedroom. It was almost like the beginning of the end of the world, as animals attack, intent on seeking revenge against the built environment.

These birds — grackles, if I’m not mistaken, graced with the purplish sheen of an oil slick — rejoiced in the feeding frenzy, sending twigs, dried leaves, insect carcasses, flecks of mud, and who knows what else, bits of plastic toys, lollipop sticks, and what appeared to be the bony white tip of a human pinkie flying up and over the side of the gutters for five or 10 minutes before they’d had their fill and moved on, I like to think to the American South, where they’re sure to find more fertile ground.

So of course I did what any concerned citizen would do — got on the internet and found a meandering bird forum conducted by some very bored people, one of whom confessed to tossing seed up into his gutters so he wouldn’t have to clean them. The blackbirds would. “Indeed they do,” he wrote years ago, never counting on the long life of pointless online comments, “and no, the seed does not grow.”

“Nice one,” another homeowner chimed in. “I hate cleaning gutters.” He leaves it to the magpies.

I could invest in wire mesh gutter screens, but where’s the fun — the balancing act atop a four-foot ladder as you reach blindly to scoop the fetid mess — where’s the satisfying chore experience in that? Besides, I’d hate to lose the bird life.