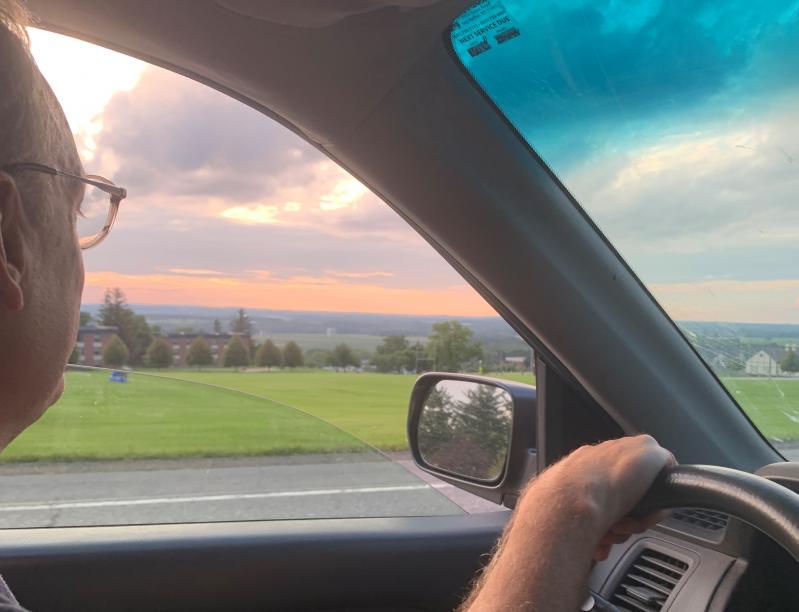 Your faithful correspondent on the trip to drop off his daughter at college.
Julie Greene
By Baylis Greene

A big blow from Henri? Don’t believe the hype, I said. People, and in particular the histrionic types on the Weather Channel, love to manufacture drama, I said. It won’t amount to much, I said, these storms never do.

Uh, unless you’re talking Sandy or 1938? Okay, so I said none of those things and was sincerely worried about the disastrous timing as we drove our oldest daughter to college upstate Saturday, with plans to stay the night and drive back Sunday, much of the seven hours, I imagined, through wind and rain and flying objects, while back home falling tree limbs stove in the roof.

But speaking of the Weather Channel, my daughter and I were watching the late-night reports in our room in an old red-brick poorhouse turned B&B, and when I saw the egghead meteorologist patiently nodding through the uninformed field correspondent’s blather before calmly announcing, “At this point the storm’s running out of time to make more of a turn to the west,” I knew we were in the relative clear.

And thus free to focus on the kid’s wrenching departure. Tough but earned, I’d say. That is, she’s ready, after two years of a (forgive the corn) deeper academic dive with Pierson’s International Baccalaureate program, and one year of a helluva beneficial restaurant hostessing job.

It’s obvious, but I’d never really considered how signing on for a college sport provides a ready-made support system of teammates, a coach who gives a rip, a purpose that’s supplemental to studying but in truth equal to it; rather than arriving alone, as I did, with nothing but a suitcase and a tube of Chapstick. (Apologies to Christopher Guest.)

“It goes so fast!” young Emily says from the grave in “Our Town,” as she surveys her living family and Grover’s Corners one last time. “Do any human beings ever realize life while they’re in it — every, every minute?”

Of course not. And it does go fast. Working on seventh-grade math problems together on the computer is about all I can recall from our daughter’s three years of middle school, for instance. More memorable are the little things, more recent, the “Bray-uh!” cry of exasperation as she showed a sibling the latest social media outrage. The exaggerated panting as she ran the length of the (quite short) hallway to her bedroom. Making her coffee.

It wasn’t goodbye, only so long. I’m already planning on insisting on a family game of hearts at Christmastime, that MoMA car show, the trip to the driving range we never found time for.

By Monday morning I had beaten back the bout of homesickness I felt at your absence Sunday night. But when I went to the car, did you have to leave behind that mouse’s nest of Werther’s Originals wrappers in the rear-seat cup holder, a leftover from the drive upstate?

I couldn’t bear to remove them. You always did have a sweet tooth.