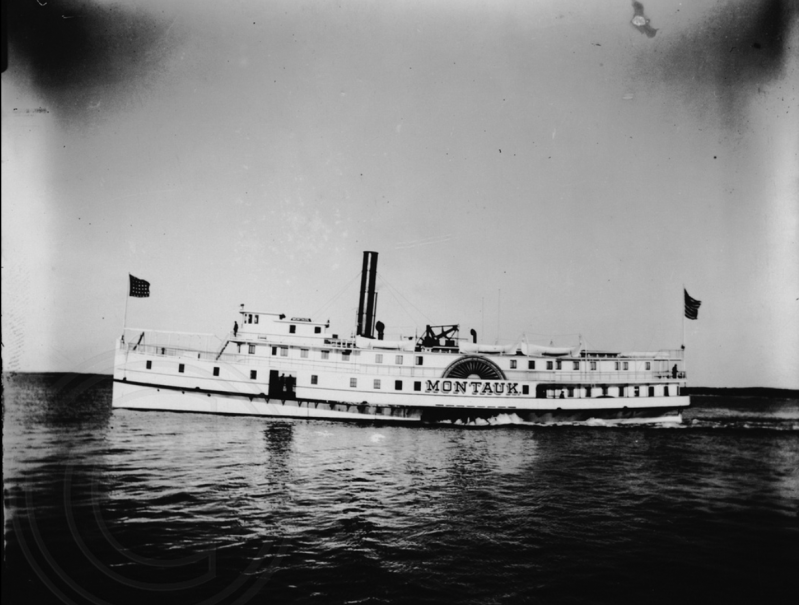 The paddle steamer Montauk, flagship of the Montauk Steamboat Company, was launched in 1891. Between the company's founding in 1853 and the early 1920s, its ferries carried passengers from the East End to New York City, Block Island, and New England. East Hampton Star archive
By Bess Rattray

Have you ridden on the Cape Henlopen — the old, iron, battle-axe ferry of the Cross Sound line, the one that brought the 29th Infantry to the beach at Normandy in 1944? Well past her days of glory, she lowers her chin and heads into the chop, a bit slow, a bit bruised and blotchy — perhaps a bit comical, like a matron standing at salute who has squeezed herself into the uniform of youth — as she stoically delivers passengers to New London and Orient.

Does it astonish you that there is a ferry in service today on the Long Island Sound that landed in France on D-Day? Well, she did. The Cape Henlopen may now ply a tamer route than the North Atlantic or the English Channel, and carry Americans armed with jumbo Slurpees rather than carbine rifles, but she was built in 1943 by the Jefferson Boat and Machine Company of Jefferson, Ind., and began her career as an L.S.T. 510 landing craft, delivering 200 men and 70 vehicles into the surf at Omaha Beach.

So says the photo exhibit you can peruse aboard the Cape Henlopen, as you while away the hour-and-20 it takes to get across.

My children are less interested in this incredible fact than I am. I’m not sure what 77 years means to them. I love a ferry ride. I love the chugging engines and the smell of oil. I love being forced to sit and read a book. I love leaving that book on the table in the damp cabin to walk around the uncovered upper deck in all weathers — indeed,  better if there is high wind and heavy rain — to look at the birds in their slow-wheeling circles, the boats and buoys going by. When I’m on a ferry, I cannot help but think of a favorite poem, Walt Whitman’s “Crossing Brooklyn Ferry.” Do you know that one? It’s a poem about crossing the years, decades, and centuries to connect with passengers who came before and who will follow. Walt speaks directly to the reader, addresses you personally:

“It avails not, time nor place — distance avails not,” Whitman declaims,

“I am with you, you men and women of a generation, or ever so many generations hence,

Just as you feel when you look on the river and sky, so I felt,

Just as any of you is one of a living crowd, I was one of a crowd,

Just as you are refresh’d by the gladness of the river and the bright flow, I was refresh’d,

Just as you stand and lean on the rail, yet hurry with the swift current, I stood yet was hurried . . .”

He obliterates time. Shuttling back and forth on the Cross Sound Ferry is not a heroic journey, but I’m susceptible, I guess, and it does bring back a flood-tide of memories, reminding me strongly of the years when I traveled back and forth by water between East Hampton and boarding school in Massachusetts. Crossing in winter storms, when the ferry rocked and rolled, and other passengers threw up on the floor. Crossing while reading an assignment about Charon, the ferryman of Hades.

Crossing with my mother, who I bored stiff with an endless recitation of facts about earth science I learned in my sophomore spring. I had reached the topic of seismic waves, and wave patterns, and peaks and troughs when she asked me to stop talking about it. “Okay, okay,” she said, “That’s enough. I don’t need to hear any more about wave patterns.” I thought that was mean, at the time — what mother doesn’t want to hear their child’s enthusiastic explanations of academic subjects acquired at expensive New England boarding schools? — but I’m a bit more understanding now that I’m a parent myself and have listened to intensive and unbelievably extended descriptions of subjects such as “the various ranks of monsters — from Sludge Jellyfish to Rhino Wrestler — who comprise the Monster Association in the Japanese manga series ‘One-Punch Man.’ “

You may or may not recall from high school English class the opening lines of another of Whitman’s great works, “Out of the Cradle Endlessly Rocking”?

“Out of the cradle endlessly rocking.

Out of the mocking-bird’s throat, the musical shuttle. . . .”

Whitman is our close kin, here on Long Island. Raised on half-naked swims, bluefish, ocean dunes, bonfires, bobwhites, goldenrod, and honeysuckle. I’ve always felt I knew exactly what he was talking about. The ferry travels out and back in its rocking course, rocking us into a reverie, carrying us between home and away, past and future, present and past. A musical shuttle.

The Cape Henlopen was bought by the Cross Sound company in 1983, when I was entering my junior at Concord Academy. Now my daughter is considering boarding school. I hope she chooses one in New England, rather than New Jersey or Delaware, so we can travel back and forth in the old way. Nobody has enough lifetime for the Jersey Turnpike.

Yesterday, returning by the 5 o’clock ferry after a tour of Choate in Connecticut — during which I broke out in full-body hives as we sweated up and down the campus hill in the blazing heat, my hair clinging to my reddened face (thereby realizing my destined role of Embarrassing Mother who you might escape via boarding school with dramatic aplomb, applause applause to me!) — she broke away from an episode of “Orange Is the New Black” on her iPhone to join me outside on the deck, where I was leaning on the rail. It was a still evening as we glided through the Race and rounded Orient Point. She took some photos of the smooth pink-and-dun reflection of the sun on the water. “Maybe you should let me write your column this week,” she said.