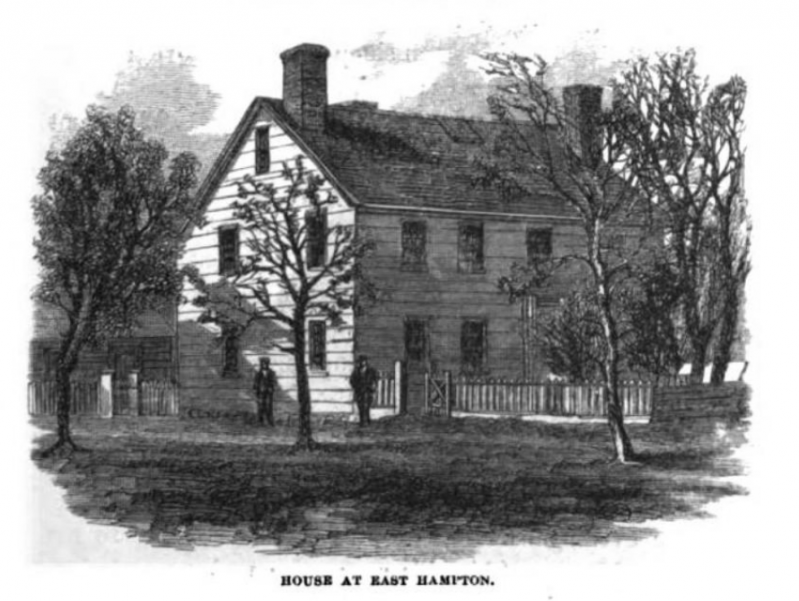 The downstairs lights were on at East Hampton Village Hall just after 6 a.m. Main Street was already coming to life with drivers taking advantage of the early hour to get where they had to be.

Lyman Beecher had bought the house built in 1800 not long after he came here to be the town minister. He had been a 1797 Yale graduate before he accepted the East Hampton post and went on to be a leader in American Protestantism. Shortly after his wife, Roxana, bore their first child, Drusilla Crook was brought to the household to take care of the baby — she was 5 years old, “a colored girl,” Beecher wrote in his autobiography. Zillah, as the Beechers called her, was “bound to us till she was eighteen.” When Mary, their second child, was born, the Beechers took Zillah’s sister, Rachel, as well.

“Zillah was the smartest black woman I ever knew. She learned every thing that Catharine did, and as well as she did,” Beecher wrote. Rachel did not have her sister’s gifts.

The Crook family name appears in Gardiner’s Island record books a few years before the American Revolution. David Gardiner’s inventory of possessions made after his death lists a man, Plato Crook, age 35, and a boy, Abel Crook, 8. In 1786, Dr. Nathaniel Gardiner’s “Negro Zil” received a pair of shoes from the Hedges cobblers shop.

Drusilla and Rachel, who slept above the kitchen, had almost certainly been enslaved, too. In New York’s gradual abolition law of 1799, any child of an enslaved mother born before July 4 that year was to remain in servitude until she was 25; men were enslaved all but in name until they were 28 and close to the end of their most productive years. A Black woman named Rachel died in East Hampton in 1842 and might have been the same Rachel as the girl held in the Beecher house, now Village Hall.

Beecher stayed in the East Hampton pulpit until 1810, when he took over the Congregational Church in Litchfield, Conn. Zillah and Rachel stayed behind. In letters to East Hampton friends, they made a point to send their regards to the by-then young women. Harriet Beecher Stowe, Lyman and Roxana’s most-famous child, the author of “Uncle Tom’s Cabin,” was born in Connecticut.

In the morning mist, one can almost imagine the family and the Black children who served them. The house is passed by thousands of people each day this time of year, few, if even more than a handful of them, knowing their story.