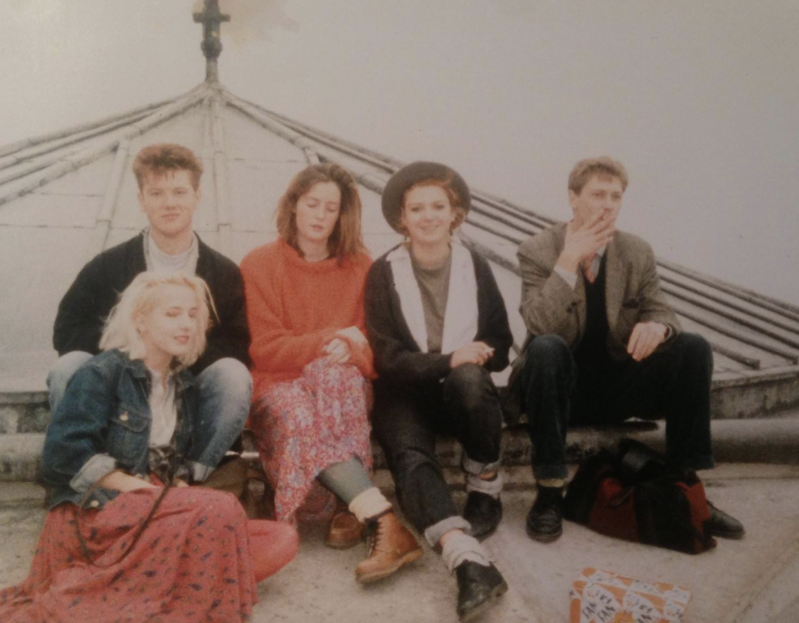 Fall of 1986: The author in orange, on the roof of Notre-Dame de Paris. Adrian Curry
By Bess Rattray

It’s been a year since I began writing “The Shipwreck Rose.” This column is number 52. Only 49 more years — not columns, years! — to go before I match the record set by my grandmother Jeannette, from whom I seem to have inherited my typographical verbosity. She also tended to go on and on and on in chatty tones, banging out 1,200 words and beyond on her manual Underwood Champion. Leopold and Loeb were thrill-killing to a new ditty titled “Rhapsody in Blue” when she began in 1924; when she died of a stroke in 1974, the AM radio was playing Harry Chapin’s “Cat’s Cradle” and Patty Hearst was being fitted for a revolutionary beret.

What’s changed in the last 12 months? The traffic got worse. The lampposts were painted black. Gucci and Balenciaga arrived on Newtown Lane. Booming dance music from deejayed outdoor weddings now rattles the windowpanes in the still, soft air of the moonlit village two or three nights a week. And, of course, we have been freed from the lockdown lite that made last summer so strange. In that first “Shipwreck Rose” column, a year ago, I predicted that Christmas and New Year’s would be sad, household-only affairs, but that we’d be free to host Easter egg hunts by spring. The color-wheel has turned and we are back in cornflower-blue July. I was off by three months and one major holiday: As the Fourth of July approaches, we are living as if nothing had ever really been wrong. My children use the opportunity of standstill traffic on 114 to explain to me what a Mercedes G Wagon is and why it’s popular among the gangsters of Wall Street and South Central L.A.

Despite my best-laid plans, over the last year I’ve become worse at writing my column before deadline day, and — because of my laggardly habits, and this being deadline morning — the Amazon Echo Show smart-alarm clock has just rudely woken me from a dream about Paris at 6:45 so I can write this before I’m in hot water with the managing editor.

My dreams have a particular geography: Paris, Budapest, the Lower East Side of Manhattan circa 1987 — cities by rivers,  the stations on my nocturnal pilgrimage. My subconscious is relentlessly escapist, always organizing trips. This morning, on my return to Paris, I was being toured around by a friend of the family, a young woman who didn’t smile a lot but who wore curly hair and a scarf (of course) nonchalantly. I kept asking her if Le Bateau Ivre was still open and if it served lunch, but she wouldn’t answer. My subconscious has a sense of humor: On the quay near one of the bridges over the Seine — though I couldn’t recognize which bridge, it was shrouded in mist — we happened upon one of her friends, who was playing with puppies on a park bench. A few other puppy-patting enthusiasts were gathered around, like chess players in a park. A Parisian puppy-patting affinity group! “Many Parisians didn’t support it, at first,” our tour guide deadpanned. “It was an American who brought the puppies here.”

The cities that I visit at night represent, I have realized, my regrets. The City of Lights represents a life I don’t feel quite adequate to be a part of, although some sparking wire in my brain keeps firing off the hope that I’ll yet ride through Paris in a sports car with the full moon in my hair (to quote Marianne Faithfull).

I was a total teenage mess, only 18, when I jetted off alone to Charles de Gaulle, not knowing a soul. My boarding-school French was pretty good but I refused to speak. When I ordered “oeufs au plat” in a cafe, the words came out in a nervous Minnie Mouse squeak, and the waiter mocked me in a high voice. I accidentally ordered calves’ brains at Le Bouillon Chartier. My teeth were wine-and-nicotine-stained, and I was intensely lonely. The desk clerk at the hotel by Saint-Julien-le-Pauvre heard me crying in my attic room. After some months on the Left Bank, haunting Shakespeare & Co. like Walt Whitman’s ghost, I flew home and retreated to the safety of college on the Upper West Side. (My Aunt Mary, who had given me $350 dollars as a bon voyage, and whose own idyll in Paris lasted more than a decade, was disappointed: Home so soon?)

These waystations of night aren’t just a method for my psyche to exercise its regrets, but also a way for me to time-travel. I’d like to live in those lost worlds. The 20th century: I’m very glad to have grown up in it, rather than the internet-numbed corporate lukewarm that is all my children have ever known. I’m glad to have caught the tail end of honky-tonk America, driving in automobiles without seatbelts, frequenting “neon fruit supermarkets” at night — to quote Allen Ginsberg. Head-banging to Link Wray, Joey Ramone, Grandmaster Flash. Disco fries. Barbara Stanwyck double features at the art-house cinema. Frank O’Hara. The Woolworth’s lunch counter, Orange Julius, Steeplechase Park, Missing Foundation. What did we do with that plenty? What have we done?

Youth, in my case, lasted a long time. A long, long time.

I wonder if I will revisit April of 2020 in my dreams when I’m 84? I rather think not. I rather hope not. I’ve already half-forgotten so much about the early days of Covid. What lingers is how frightened we all were at first: I keep thinking of one evening last April, walking Sweetpea on Dayton Lane, and dragging the dog to the other side of the street to get as far as possible from a jogger who was huffing and puffing as she chugged into view. (Do you remember the images from Wuhan of doctors and nurses tending patients while outfitted in full-body, white, hazmat-type suits, their heads sealed inside space-helmet hoods of Tyvek and clear plastic?)

The pandemic hasn’t been the zombie apocalypse we expected when it all began. When the disaster came, it was much more mundane. Grotesque, and stifled, and stilled. Though, I suppose, the family togetherness in lockdown with my two children might be something my subconscious will one day carry me back to — the hothouse interior of our domicile. The cake-baking, the watching of Jim Carrey movies, the permanent dent in the cushion of the living room couch where my son spent three quarantines prone before a glowing screen of Japanese animé. Just a moment ago, Teddy taught me how to pronounce the title of a viral-video meme, “Omae wa mou shindeiru” — in Japanese, “You’re already dead.”

Despite the ebbing of the flood-tide of Covid-19 cases and contacts, I’m still working as a contact-tracing supervisor, advising camp directors now that school is out. A third of the New York State contact-tracing staff was laid off last week. To my surprise, on Monday, our employer issued a memo informing us that they expect to maintain a contact-tracing work force beyond the end of August and into the fall. We gossip around the virtual water cooler: Does the extension mean that the epidemiologists think we’re going to have an autumn Delta-variant wave? I think not. I hope not. I am weary of treading water and would like to swim on.