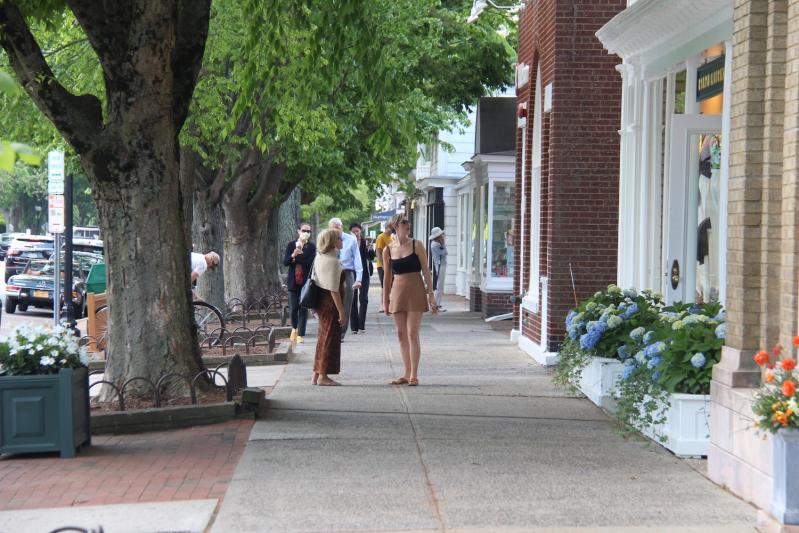 The solution to "luxury blight," the Anchor Society proposes, is to follow the lead of an organization in Nantucket called ReMain and found a volunteer nonprofit group here in East Hampton to corral residents into donating to fund the purchase of an actual, honest-to-God building . . . and turn it into something useful.
Durell Godfrey
By Bess Rattray

It’s become popular in recent years — so popular it’s become a snore — to complain about the State of Main Street, but many local people have been harping on this subject without the aid of symposiums or magazine features for 30 and more. We all know what’s wrong: The primary shopping district of East Hampton Town — that is, Main Street and Newtown Lane, in the village — ceased being conducive to either healthy human interaction or practical commerce decades ago. Duh, right? If I’m being boring, please skip down to paragraph three, but, otherwise, read on, because we have a solution to offer. Or, if not a solution, a mitigation strategy.

I was 18 when I began opening my big mouth about the bad things happening on Main Street and Newtown Lane. My first idea, when I was a teen back in the Reagan Era, was that someone in power should set up a system of substantial tax breaks or tax rebates for mom-and-pop shops that served some useful purpose, to prevent the entire area of “Upstreet” being turned into a homogenized zone of chain stores. Back then, I imagined — we all imagined — the doom of Main Street would come from fast-food restaurants like McDonald’s or mall shops like, I don’t know, Dress Barn or Kaybee Toys. Zoning was tweaked to prevent that sort of chain-chain from muscling in, but none of us anticipated what eventually transpired: that Main Street would become a depressing desert of elite international designer brands. Gucci Gulch. That Italian and French fashion conglomerates (which are still chains!) would use shopfronts that once housed modest kids’ shoe emporiums or stationers not so much for retail but, in effect, as positional marketing. Stores as billboards. Useless to most of the community. Nearly useless even to the very rich.

Two summers ago — getting out the riding crop once more to beat the dead horse — we broached the topic again in EAST magazine, of which I was then editor in chief. We coined a new term to describe the particular plight of resort towns like ours, from Aspen to Martha’s Vineyard: “luxury blight,” we called it. And the solution we proposed was to follow the lead of an organization in Nantucket called ReMain and found a volunteer nonprofit group here in East Hampton to corral residents into donating to fund the purchase of an actual, honest-to-God building . . . and turn it into something useful.

The something useful, in this scheme, would be a retail anchor where you could shop for necessities (an ice-cube tray, Scotch tape, white socks) as well as visit a service counter or two, to get your soles mended or your trousers hemmed. Maybe you could buy a chocolate malted. Maybe there would be a candy counter, and a magazine rack, and a soda fountain, and some, you know, cute hand-knit mittens in winter among the functional stuff like shoelaces and barbecue utensils. Not a twee, trendy, shopping experience but a general store along the lines of the community general stores you see in Maine. A Vermont Country Store writ small. Our volunteer community organization would hire professional staff to run this store; I’m not talking about a 1960s granola-and-mung-beans co-op, where you’d have to take a shift behind the register or weigh out dried garbanzo beans by the pound.

You know that predicament you find yourself in when your mouth runs ahead of your feet? I mean, you run your mouth and make suggestions or promises that then need to be followed up on? Having — publicly, in ink — proposed a solution, I’ve been pricked by conscience at regular intervals for two years now. I have been slow to take action. I’m busy! I’m a working mom! I need another project like a hole in the head! But in April, while waiting for the cheese to melt in my son’s grilled cheese — and for no other reason than to break up the monotony of my work-from-home routine — I finally decided to do something about it.

In a hurry, lest I changed my mind (or got too distracted by thoughts of the hunky actor who plays Roy Kent on “Ted Lasso”), I filed legal paperwork to create a nonprofit and give it a name. I did this with a blindfold on, willy-nilly, almost, so the die would be cast before I could sink back into cozy inaction.

We have a nonprofit. And by “we” I mean the founding board of directors: me, my friend Nina Channing (who, as associated editor of East, made phone calls to Aspen and other resort towns, seeking ideas, in assistance to Carissa Katz, this newspaper’s managing editor, who wrote our “Luxury Blight” feature in the magazine), and my sister-in-law, Lisa Rattray, who has a ton of friends and happened to be standing in my yard when I shouted out the window to ask if anyone would be willing to join the board. We needed a minimum membership of three board members to launch. Please note, it’s possible that Nina and Lisa have already forgotten that they said yes and will be surprised to read this in Thursday’s paper. Sorry, Nina and Lisa. Love ya!

The new nonprofit is a fully legal 501(c)(3) called the Anchor Society of East Hampton Inc.

That name was chosen — again, in haste — because it will be an anchor business. As long as we avoid the cheugy anchor logo-look favored by hipsters who run craft breweries, the name the Anchor Society will offer nice opportunities for branding. Plus, I like the word “society.” Because I was the person who filed the paperwork, I have made one further executive decision: In the legal description of the Anchor Society, I outlined our mission, which I don’t believe can be changed. Our mission is to raise money to buy a building, and that building will be a general store, and the general store will be in the Village of East Hampton. That’s it. Beyond this, all decisions will be made by the members. I hope there will be a lot of you. Everyone and anyone can join, even if they cannot give money.

Our purpose isn’t just commerce, but community. We will hold convivial group meetings (perhaps a picnic, to start, with a megaphone?), and we need you. Right now, to be specific, we need: 1) someone to volunteer to make us an Anchor Society logo. 2) someone to volunteer to make us an Anchor Society website. 3) someone expert in bookkeeping or even, perhaps, nonprofit accounting. 4) random citizens who’d like to do something but they’re not sure yet quite what. Would you like to party-plan? Would you like to fund-raise? Do you understand nonprofit law, in case we need guidance? Do you have opinions about which chocolate bars should be stocked at the candy counter? Please email us at [email protected]. If Nantucket can do it, so can we.