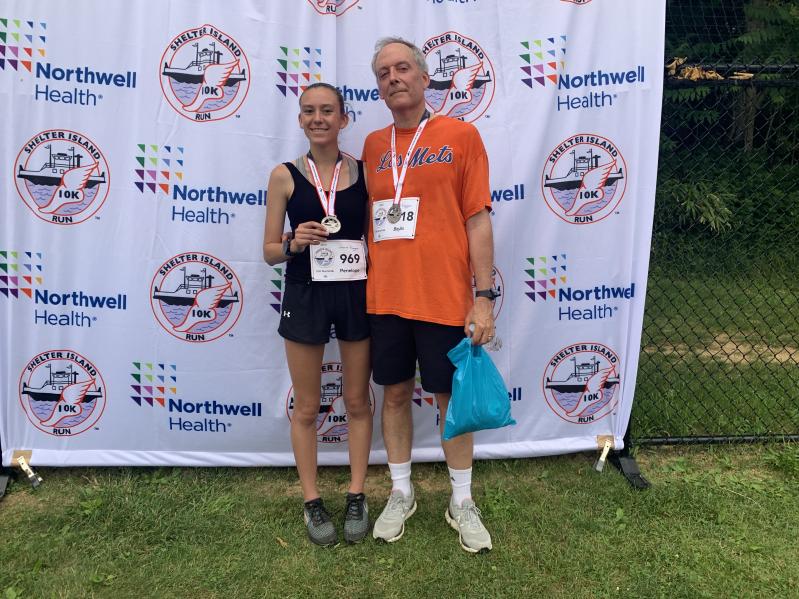 Running along glittering Dering Harbor, with the osprey nests and bobbing sailboats, past the well-columned mansions and their sloping lawns, it’s easy to see the Shelter Island 10K as something like the road racing equivalent of golfing a round at Shinnecock Hills.

Maybe that’s why it seemed natural that a British-accented gent, white linen shirt unbuttoned at the neck just so, silverish hair kept fashionably long, should be kicking back at a roadside card table Saturday, cheering runners through the 80-degree heat with what looked like a jeroboam of rosé at hand.

A tease? An enticement to finish? “It’s all downhill after the church!” he called out, half laughing. “Easy peasy. C’mon, let’s go!”

And while it’s true that church bells never sounded more fortifying than they did coming from atop old St. Mary’s Episcopal, I noticed that not much farther along the route a quick dogleg left would take you directly into the leafy silence of Our Lady of the Isle Cemetery. Should anyone feel the need to check out early.

I thought about it. How to describe my condition vis-a-vis pounding the hot tarmac for 6.2 miles? Oh yes: “woefully unprepared.”

I had it in my head that after a winter off, a winter characterized by a newfound taste for cabernet, and newfound tastes in general, it would suffice to sneak in a 2.5-mile training run a dozen times in May’s 31 days, followed by a slight uptick in regularity come June. I was counting, in other words, on muscle memory.

In 2018 and 2019 — not so far off, really, they just seem like a lifetime ago — I finished this fine race in a respectable 50-some-odd minutes. Under an hour: It seemed reasonable to think it might happen again. But the man’s too big. The man’s too strong. The man being, of course, Creeping Old Age.

It was a one-hour-and-eight-minute-long slog. It was like Jerry Maguire’s “pride-swallowing siege.” Little kids and women of a certain age blew past me. A bit of advice: You’ve heard of this road racing strategy in which you stop jogging and just walk for a bit? Without losing any time? You simply pick up the pace again when refreshed?

It flat works. The same people kept doing it — and kept showing me the rubberized soles of their departing Asics again and again. I couldn’t win for not stopping.

One wrinkle was the disappearance of those little waxed paper cups at the watering stations, so handy for gulping or splashing in a reddened face, and then so satisfying to crush and toss aside like you’re too busy for the environment. But no, only plastic Poland Spring bottles this year.

I grabbed one and held on for dear life, sipping and then carefully recapping. Sipping again. Never tossing. I needed it, even after its shaken contents had turned as fetid as a Fort Lauderdale puddle in July. Also, I wanted to recycle.

Like Pheidippides, that ancient Greek who hustled 26.2 miles from Marathon to Athens to deliver the news of an epic victory before dropping dead for his efforts, crossing the Fiske Field finish line I made my delivery to the proper receptacle.

I may not have croaked, but I was finished.