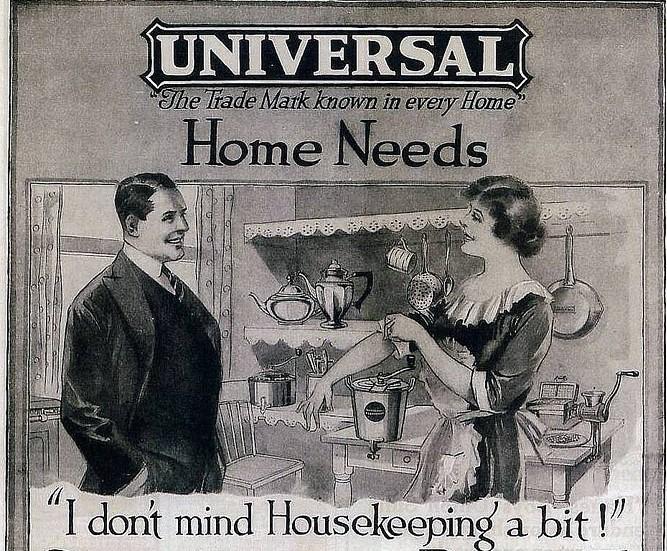 From a 1920 advertisement for Universal Appliances, New Britain, Conn.
By Baylis Greene

It’s remarkable how consistent the kids are in dropping dirty clothes at my feet late at night, just as my eyes have started to cross from too much computer time.

I uncross them with this neat exercise by which I lift them from the bright white Microsoft Word background and, from my seated position, muscle them sidewise and up at the youthful offender, now barely made out through the blear, and mumble, almost inaudibly, “Just a little bit earlier in the evening?”

Although I’m happy to help, and glad the kids have a fashion sense and the ability to plan nine hours ahead, these laundry requests are unfailingly too targeted, too laser-focused on the next day’s outfit. The pile’s too small. Because then the hunt begins for other clothes similar in hue and construction — dark for a cold wash, whites for the warm — to make running the machine, taxing the sewerage, and expending the aquifer resources worthwhile.

The constant workout these front-loaders get has earned newfound respect for Korean manufacturing. Not that anyone’s asking. I mention it because one of the many ingenious touches of David Mitchell’s “Cloud Atlas” is that section of the novel in which he imagines a future, such as it is, dominated by that Asian nation, with Seoul as the center of the hair-raisingly dystopian world — which makes sense in light of Samsung and LG alone.

It’s good to see that the industry-standard ruggedness remains. We once lived in Flanders, not far from the bay in a place with a full, too-deep, sump pump-outfitted basement, and when Sandy ushered in 18 inches of water, ruining much else, I went right on using the damn appliances after the floodtide had receded.

Speaking of basements, I know of a family — by which I mean I eavesdropped on this argument one time — who simply leave all their clean clothes in piles down there, where it waits for whoever needs to pick through it. But laundry basket as storage unit fails to address the root cause — volume.

That’s why I’ve taken the lead, wearing the same items over and over again, like an eco-warrior or a street person, even going back to a threadbare long-sleeve thermal undershirt bought at the Kenmore Square Army-Navy store in Boston circa 1985.

And then there’s the convenience. I strategically declined to put away a pair of shorts back in September, just left them on top of a dresser. Nine months later, the warm weather returned, and there they were, waiting for me.