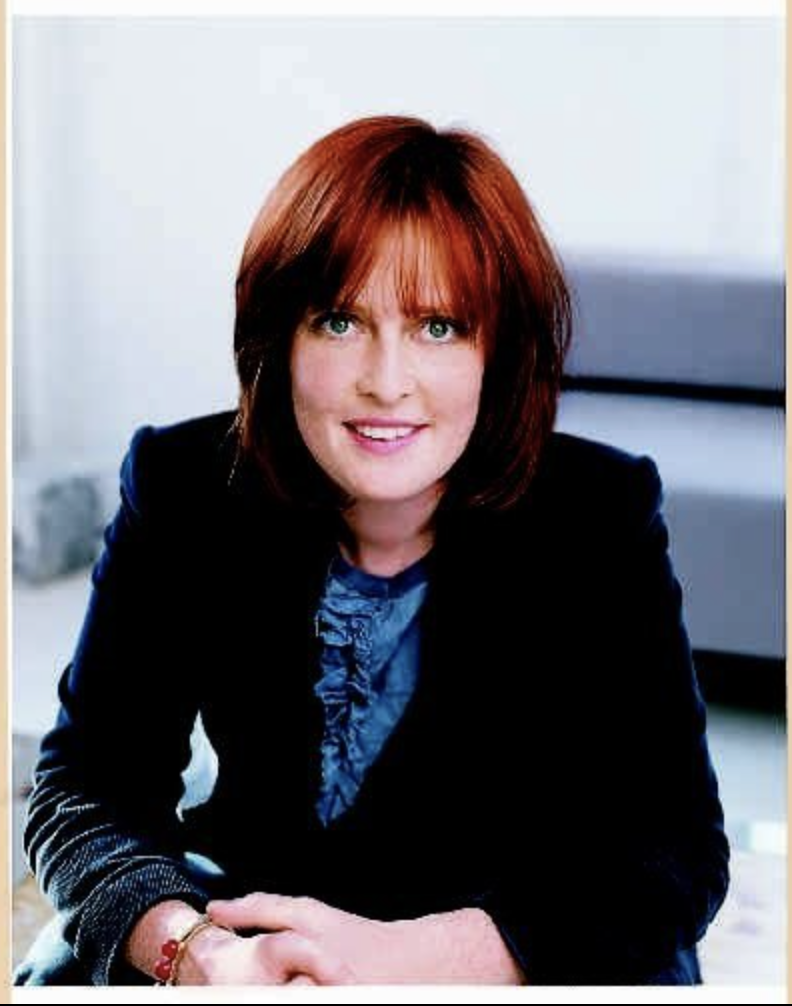 Who the heck is this redhead? The unrecognizable author after a short-lived Vogue makeover, circa 2003.
By Bess Rattray

Have you seen the commercial for Extra sugar-free gum, set “sometime in the not too distant future,” in which — as Celine Dion sings “It’s All Coming Back to Me Now” — citizens freed from lockdown rush giddily into the streets, pop a spearmint slice into their mouth, and leap into the arms of strangers to make out? The funny part of this viral ad, to me, isn’t the glimpse inside their homes, crammed with stockpiled water jugs and cans of tuna, but the appearance of the people: You can barely see the men’s eyes above the bushy facial hair, their beards crusted with Cheeto dust; the women wear flannel pajama pants frayed from not having been taken off for 14 months.

I have not been wearing pajama pants, but if you rang my doorbell today you’d find me scuttling around the house looking like Eloise, my hair standing up at strange angles, my shirt untucked, frantically looking for my lost pet turtle. I have always been a bit of an Eloise, prone to exclaiming “I’d rawther rawther rawther be in Paris!” or “Oh my Lord il y a beaucoup de traffic on 114 ce matin!” but the pandemic has only encouraged my unfortunate natural propensity to be disheveled.

I do not really own a pet turtle. But there are two goldfish on the sun porch that my kids won at the last carnival on Havens Beach, two summers ago, who persist in, um, not dying and who have grown too large for their tank. You can no longer see Goldie and Plata, actually, because green slime has covered the tank’s sides, obscuring the fishes’ view of our breakfast table. I’ve been telling myself that an algae-filled goldfish tank is a “more natural habitat” for Goldie and Plata, but who am I kidding? Goldie and Plata and I need a makeover.

People make distinct facial expressions of doubt when they hear I used to be an editor at Vogue. My appearance does not now, and did not then, match expectations. I have never dressed like a Vogue editor. Is it a point of pride or an admission of failure that I managed to rise fairly high in the magazine world while wearing scuffed Puma sneakers — less than sparkling white — instead of red-soled Jimmy Choos?

Once, circa 2002 or 2003, I was dispatched by the beauty director for an unofficial makeover. Clearly, I sorely needed one, even then. The beauty director sent me to have my hair dyed red — the very same red worn by my favorite redheaded model, Karen Elson — by the colorist employed by Karen Elson herself. It burned my scalp. The beauty director, a plainspoken young woman I’d worked with for years, suggested that I’d look better if I wore foundation; I wore foundation for a week or two, and then let the project drop. It wasn’t until more than a decade later that I realized this beauty director had probably been instructed by the higher-ups to try to improve my appearance. Duh!

I rather regret not taking better advantage of the spoils of the famous “beauty closet” — the locked inner chamber in which all the makeup and merch, the Frederic Malle perfume and the Chanel black nail varnish, were hoarded, like the jewels and gold bullion hoarded by an ogre in a fairy tale. I did have fairly regular access to those spoils, but I gave most of it away to friends. (I also rather regret having said “no” to the press trip to the Hotel George V on the invitation of Veuve Clicquot, which was introducing a new pink champagne. Duh! Stupid youth.)

I relinquished all such opportunities for free glamour in 2006 when I met a Canadian boat builder and moved out of the city, riding the long 100 miles east on the Long Island Expressway in the back of my last black Town Car with a greige handbag from Marc Jacobs, my going-away gift, on my lap. According to Laurie Jones, Vogue’s managing editor at the time, Anna Wintour gave an extravagant eye roll and said, “She’s leaving for love.”

At Vogue, I was a strong champion of the makeover. No one listened to me. Many long moons ago, before makeover shows became such a staple of Netflix — before “Queer Eye for the Straight Guy,” before Americans spent evenings watching “Pooch Perfect,” in which dogs are primped and dyed until they look like SpongeBob SquarePants or Ziggy Stardust — I pitched the Devil herself on the concept of “the Vogue makeover”: Pick some intriguing woman and make her over, with before-and-after features in the pages of the magazine and a television spin-off. This was a good idea, but this did not happen. My suggestion, specifically, at one juncture, was that we promote a then-assistant in the beauty department, one Tinsley Mortimer, to become our Vogue-branded antithesis of Paris Hilton. That we could even create a “Tinsley Doll,” and a Tinsley TV show. The vindicating part of this boastful anecdote is that Tinsley did become a reality star a few years later, a “less sleazy Paris Hilton,” but it wasn’t under the Vogue aegis.

But getting back to where I was . . .  sitting in an armchair in my living room for the 9,999 thousandth day, not quite adequately overseeing my son who is in his second round of quarantine (having been exposed to Covid at a beach birthday party), wearing the same navy shirt I had on yesterday, a pair of Gap yoga pants (see? yoga pants are not pajamas!), and thick gray sweater slippers with rubberized soles.

I am sure it’s not too late to pull myself together, aesthetically speaking. Right? I should try.

I remember once upon a time telling my early-1990s boyfriend, Will, that I looked forward to an old age in which I’d let my appearance go and learn how to garden, riding a bike around town with my vintage granny dress and hair askew, like a character from “Mapp and Lucia,” and I remember his horrified reply: “Why would you do that?!”

I own a Peloton but haven’t been on it in about eight months. I just pay the monthly fee.

I have very low-grade depression, just enough stifling ennui from a year of too much stress and too much work to keep me in a sedentary state and prevent me from booking a hair appointment.

I’m trying to talk myself into believing this will be fun.

If any of you out there reading this happens to be a producer of reality television shows in which you surprise hard-working single mothers, who happen also to be first responders, with elaborate television makeovers, please ring my doorbell. I’ll be here.