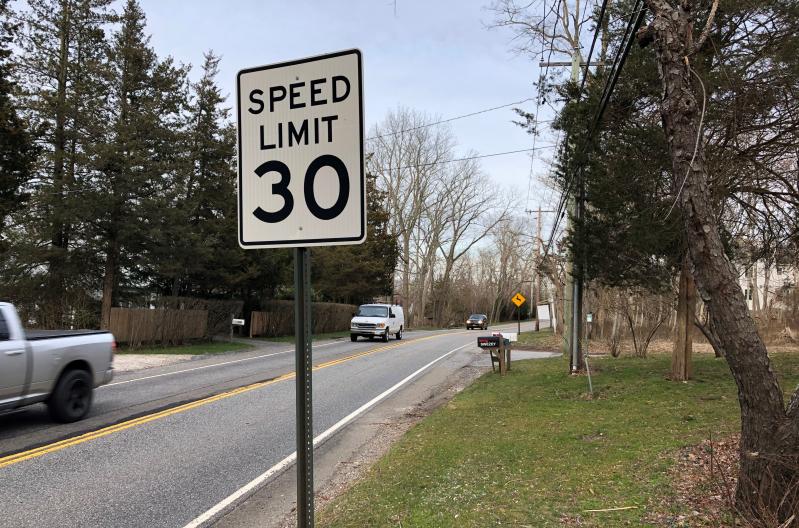 “You got Noyac Roaded.” You know it’s bad when a regionalism springs up to describe being obnoxiously tailgated by yet another lead-footed driver along a supposed country lane, now more like a bustling highway that rarely, if ever, lets up.

Sometimes, like in L.A. with “the I-5,” the road that knocked off the L.I.E. as the country’s most trafficked, the all-hours flow can inspire dumbstruck awe. Here, on this South Fork byway turned major artery, it’s simply enraging.

And deadly. At least for the abundant deer fender-bounced into the hedges, or the bloodily pancaked squirrels. Yet, amazingly, people, too, walk Noyac Road — it’s a wonder there hasn’t been similar human carnage. There’s just shoulder enough for a tightrope walker.

Going for a run? You can carefully stick to the uneven, ankle-bending grass roadside, sure, but the whistling vehicles will remain within arm’s reach.

In a neighborhood on one of Noyac’s offshoot streets, anecdotally, a newly year-round resident, newly fed up, sold his nice two-story house attractively sited up against the Noyac Golf Course and fled all the way to, uh, North Haven. A drastic if proximate move for the sole purpose of enjoying bike rides, but that’s quality of life for you.

The other day my wife stumbled across a campaign ad from 1975 proclaiming that “Southampton Town Needs Safe Routes for Bicycles.” So said Tommy Lavelle, Republican superintendent of highways at the time. “If re-elected . . . we’ll utilize every Federal, State and County Grant to finance this program.”

“We’ll do this in the next two years,” the ad went on, as part of a five-year traffic safety and drainage program. “Vote for me on Row B.”

Ten years later he was still at it: “My main complaint is roads built for farm vehicles and the occasional pickup are now handling a couple of hundred cars per hour,” he told The Times. In May of 1985, the town counted 8,839 vehicles traveling Sebonac Road in just 24 hours. That’s 36 years ago on a back road cutting through Tuckahoe’s golf course district.

Back on Noyac Road, word is the town, to its credit, once proposed a sidewalk along the confounding stretch but was shot down by residents protesting encroaching suburbanization.

No? Not even a simple, charming, pedestrian-friendly sidewalk? Such is Hamptons thinking.