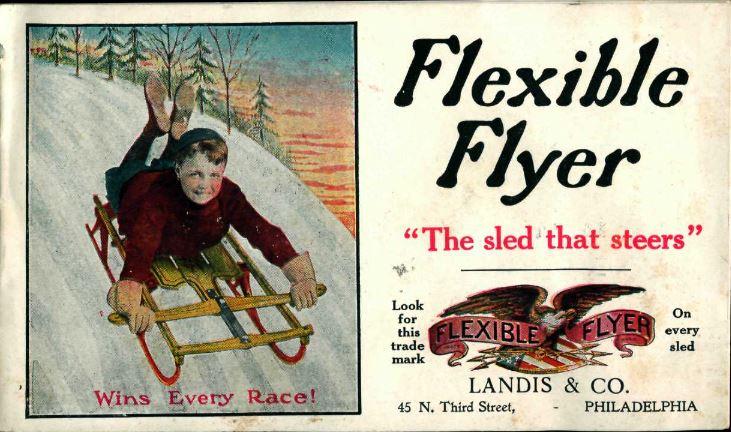 Courtesy of Hagley Museum and Library
By Baylis Greene

Like others who grew up in the ’70s, I like to mock the cultural obsession with safety. Though sometimes I wonder if Gen Xers aren’t the worst perpetrators, guilty of helicopter parenting and turning a blind eye to the dubious influence of social media after we got ours, as it were, in an era of outdoor freedom and neighborhood kids practically living on their bicycles.

Be that as it may, when I look on the freshly fallen snow, I remember taking my Snurfer — black and yellow like a taxicab, low-tech staples on its narrow deck to grip boots, a precursor to the snowboard and markedly more difficult to get downhill — to the back of the Bridgehampton Golf Course, where a snowpanted kid turned his freckled face toward me after a sledding run and wailed, bloodied mouth agape, teeth missing, the ugly aftereffects of a collision with his own brother’s Flexible Flyer, a hardwood missile on a metal frame.

I suppose even then orthodonture could work miracles. Still, I can now see the point of sliding instead on a sheet of Wham-O foam with handles, while the Flexible Flyers of yore adorn the basements of the nation.

Speaking of snowboards, I still regret selling to an assistant plumber in Springs my classic wooden Burton, an early 1980s model, used just one winter as a few of us Bridgehampton high schoolers pulled each other with a tow rope attached to a pickup through the densely forested back roads of who knows where. Mostly preferable to shoes-only skitching from a bumper, though again, more difficult.

And it was indeed woodsy back then across our beleaguered southern fork, before gated driveways and a swimming pool on every lot. On another questionable excursion, I can see my older brother and me supine in the bed of an old Ford truck, being driven home on a summer eve after the Devon fireworks. Not the safest seating arrangement, but the perspective up into the overhanging leaves was mesmerizing; they seemed just out of reach.

Of course the good old days weren’t all so good. I’m thinking of what was once Suffolk County’s favorite pastime, driving drunk, with the attendant preponderance of one-car crashes. As my driver’s ed teacher used to say, “Those trees don’t move.”