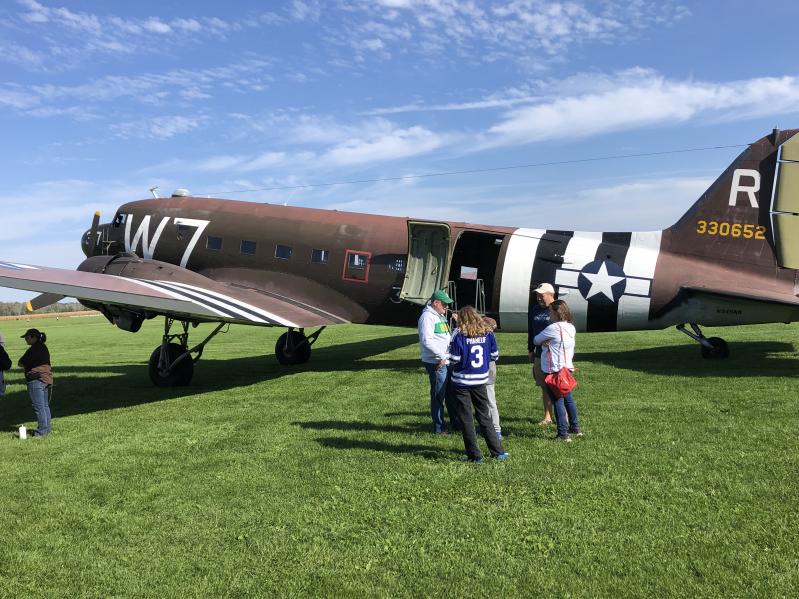 Against a backdrop of fall farm fields and browning cornstalks, a Douglas C-47 took its sweet time making its way down a distant runway.

“Up! Up!” urged a gang of young onlookers, and you could picture the pilot pulling back on the controls, but gently, no rush, captain, we’re talking about the longest active grass strip in the country.

Slowly the behemoth peeled away, gradually banking left on a late-morning sightseeing excursion — far easier duty than its flight to drop paratroopers amid flak over Normandy 77 years ago. Whiskey 7, as it’s called, made it through D-Day unscathed and remained in service throughout the rest of the war.

This was at the National Warplane Museum upstate in Geneseo, and the takeoff spectators were in fact college students, off-season track guys, enlisted to park cars in a Keystone Kops act that saw a dozen of them jammed together and waving their arms to guide a single S.U.V. to its grassy rest.

The occasion was SUNY Geneseo’s Mike Woods home cross-country invitational Saturday that drew 30-plus teams — Otterbein University of Ohio? Glad to make your acquaintance — and a stampede of some 700 runners over two races to essentially cut a circuit through and around a farmer’s giant plot of land for the flattest, most open and treeless course you’ll ever see.

Look right, and there’s the red-bricked campus up on the hill, appearing to ride a cresting wave of green. A few clicks left, and one of John Deere’s finest kicked up a minor dust storm as it tilled the soil. A little farther still, and there was what must have been one of those lightweight Piper Cub canvas-over-metal-frame jobs doing repeated touch-and-gos.

Did I mention the sun was shining down?

The elation went well beyond the convincing home win; it was like a Midwestern homecoming, what with the heartening all-American agriculture and dairy farms just over yonder and . . . call it well-being.

Honestly, any escape from Long Island is a godsend. And it’s eye-opening, how communities up there maintain themselves better, with more civic-mindedness, on far weaker tax bases — it’s like all the money here points to precisely how not to do things.

But that’s a conundrum for another time. For now, it felt like beloved old Wisconsin from my own college days, and I can’t wait to go back. I’ll bring the bratwursts and beer.