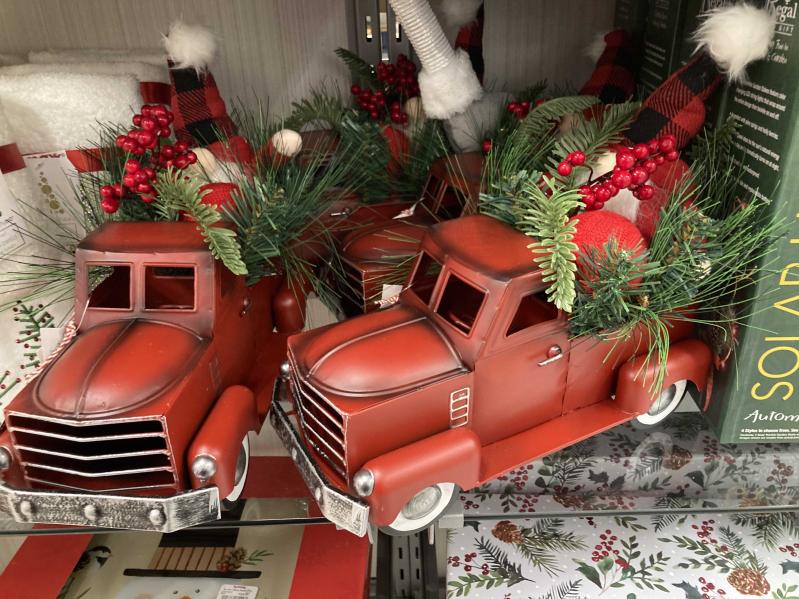 Once you notice the red Christmas truck, you'll see it everywhere. Why is this sentimental image plastered all over consumer goods, from Amazon to Etsy.com?
By Bess Rattray

Back in the days when we shopped for Christmas presents from a stack of mail-order catalogs that started arriving at Box E, East Hampton, in October and grew taller and taller on my parents’ bedside table as December approached, in addition to the Sears-Roebuck Wish Book (heavy as three bricks) that gave us kids endless hours of pleasant dreaming, I secretly took a somewhat perverse interest in an old-person’s catalog from a company called Walter Drake. I would examine it carefully when left alone in the house after school, which was basically every day in autumn, as the days grew short.

Walter Drake sold — then, and still sells — inexpensive decorative housewares, easy-on-off slippers, garden whirligigs, stationery sets, and unusual utilitarian doodads targeted toward a “senior” customer aged 70 and above. Because of this demographic, its wares seemed to come from a distant time. There would be a gadget to help a lonesome senior scratch his own back, a birdfeeder that fit into your window so you could fill it with seed from inside the house, and wall calendars illustrated with images — nosegays of violets, deer grazing amidst fall foliage, cheerful snowmen — that harked back to the era of Loretta Young and Doris Day: The aesthetic of the decorative items was frozen sometime between 1940 to 1955, and that was what piqued my interest.

Every now and then I still sneak a look at the Walter Drake catalog, and it is from Walter Drake that, about six years ago, I bought a set of customized holiday cards bearing warmest wishes from the Rattray Family. On the front was a snowy scene featuring a vintage red pickup truck emerging from evergreen woods with a fluffy Christmas tree in the back. That was my first encounter with the mysterious vintage red pickup truck that has spread like a virus all over modern manufacturing, appearing on literally millions of seasonal winter goods made around the globe, from China to Columbus, Ohio. Once you’ve noticed the vintage red pickup, you will see it absolutely everywhere. The truck is painted Coke-label red and has a quaint curved hood, sometimes a chrome grille.

We have entered red-pickup season. On Sunday, I went into T.J. Maxx — a store I prefer to avoid, but I needed to buy socks — and was greeted with a red tide of Christmas pickups on hand towels, pajamas, planters, wreaths, microfleece blankets, shower curtains. I started taking iPhone pictures and pointing the red truck out to my daughter. The vintage red Christmas pickup has saturated stores. You can find thousands of red Christmas pickup options on Amazon, Zulily, and Etsy, at Pottery Barn and Land’s End. It’s a phenomenon. It’s an emblem of . . . something, some wish.

The staff at a website called carsforsale.com has researched the subject of the red pickup motif to discover what model or models of actual real-life truck, specifically, feature in the various designs (which look nearly identical at a quick glance, but reveal subtle differences on closer examination). Carsforsale.com says that the Christmas pickup is most commonly a 1935 Ford Model 50, but sometimes it’s a 1939 Chevrolet Half-Ton or 1948 3100 Advance; less commonly, a 1949 Dodge B1-C-116 or 1946 Dodge WC.

The vintage red pickup has replaced Levi’s, the glass Coke bottle, hamburgers, cowboys, and red-gingham picnics as the most popular emblem of a (fictional) America that (never really) was.  A dream place that, as James Baldwin would point out, was always more a fantasy than a reality. In the America of the red vintage pickup truck, we live in small towns in Vermont and North Carolina, wear hunting caps, and use panel saws to fell Douglas firs in the woods with Dad, driving home in the snow with wind-chapped pink cheeks.

About three-quarters of Christmas trees in American homes last year were artificial, according to the National Christmas Tree Association.

But does anyone remember the East Hampton tradition of the green pickup truck? I could swear that when I was a kid there was a general understanding that a green pickup truck with a Labrador retriever in the back was the semi-official symbol of Bonac. Not a windmill, not a scallop, but a hard-used green pickup with a dog in the back, like the one the late Stuart Vorpahl used to drive. In my memory, the quintessential East Hampton pickup was a 1960s or 1970s International — boxy, old, and utilitarian, with a dull finish, army-green or a faded forest-green. I can also clearly remember seeing one of the first Latino families in town — I think they were from Ecuador, and this was 30 years ago — pulling out of the parking lot at Brent’s in Amagansett in a green pickup truck with a dog in the back and thinking how great it was that they were becoming Bonackers.

On our way back from T.J. Maxx on Sunday, Nettie and I passed a Trump truck parade as it  roared and blasted through the village, returning to Setauket from an annual aggro-outing to Montauk. A long line of S.U.V.s and shiny, bulbous, overfed, engorged, overmuscled American pickups, many of them kitted out with triple and quadruple-flag holders at the rear, so the Trump flags and American flags could flap in the tailwinds.

Exactly a year ago, the same truck parade set out from Setauket for Montauk. My daughter, then 13, and some girlfriends stood by the side of Pantigo Road for that one, down by Hook Mill, giving the thumbs-down sign. One of the girls held a sign that said, “The color of my skin is not a threat.” A lady leaned her torso out the side window of her car, flipped up her sweatshirt, and flashed her boobs at them. A man at the wheel of a pickup shouted at the girls through his open window: “Whores!”

I would be surprised if any of the trucks driven by these so-called “Patriots” ever emerged from any woods carrying any fir tree.

I drove a pickup for a couple of years, myself, and not because I needed one, but as a fashion accessory. I’ll admit that (even if certain consumers, engaging in machismo by purchase, would not). It was a red-and-white 1980 Chevy Silverado. This was circa 1989 and 1990, not long after us cool kids started wearing trucker hats and listening to Waylon Jennings. My Silverado never carried anything heavier than my 110-pound dog, Mookie.

Dodge trucks are “Ram Tough.” Chevys are “Like a Rock.” Men buy them because they have work to do and loads to carry. Nashville produces so many country songs about trucks that in 2013 Wade Bowen released a country song, called “Songs About Trucks,” complaining about the vapidity of country truck songs.

In rural places, pickups are still used for farm labor, and for off-roading and mud-bogging. But with the exception of pool-company pickups piled with tubing and tubs of chemicals, and landscapers’ pickups piled with leaves and rakes — both most frequently piloted by Latino-Americans — many of the hugest, shiniest pickups here in the kingdom of the Long Island Expressway aren’t really used for carrying heavy things. The back bed isn't usually filled with anything. They’re mostly empty.

Free Car Seat Checks in Southampton
Battle of the Books, and More Fun for Teens
This Week's Happenings in Montauk
END_OF_DOCUMENT_TOKEN_TO_BE_REPLACED