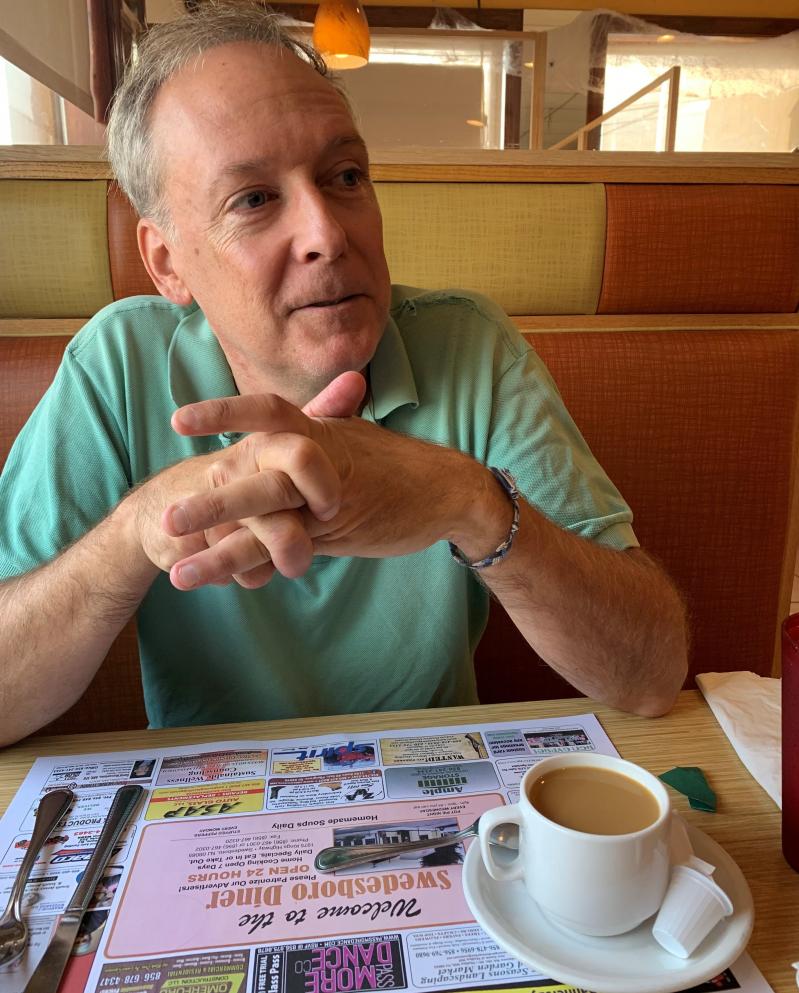 Your faithful correspondent preparing to “luxuriate in the deliciousness,” to borrow Senator Cory Booker’s phrase, at the Swedesboro Diner in southern New Jersey.
Julie Greene
By Baylis Greene

It might’ve been the best omelette I’ve ever had. Spinach, but not too stemmy. Not too much of it, either, but rather cut up just so. Diced tomato — hard to screw that up. Feta for that tang of curated mold. All folded and perfectly browned.

This was the Swedesboro Omelette, one among many offered at the Swedesboro Diner in Swedesboro, N.J. Snuggled up close plate-side was a mess of glorious hash browns, golden, white on the inside, and then the inevitable wheat toast, which could be seen as extraneous, even unwanted — but to see it that way would be neglectful of the grape jelly packaged in what they call in the trade “portion cups,” single-serve, cute but a touch wasteful, stacked and waiting for smearing at table’s edge.

And coffee. Naugahyde booths, a lunch counter, and no-nonsense pros efficient at the business of serving are all well and good, but what’s a diner without good coffee? Here it was strong, almost enough to put hair on your knuckles, or in my case enhance what’s already there. But the Swedesboro is a diner that knows dinering, and thus they readily supply full-bodied half-and-half, not wimpy milk or perfume-flavored creamer.

Anyway, half the pleasure is in the solidity of the plain white ceramic cups, modest of volume but heavy as an eight ball and just as useful in hitting someone over the head, should it come to that.

Point being, we weren’t all that far from Philadelphia.

Just two out-of-state parents frazzled from the road but eager for another college cross-country meet, this one the galloping Inter-Regional Border Battle hosted by Rowan U., the former Glassboro State. A good time, no pun intended, was had by all, in unusual mid-October heat.

Yet Swedesboro sticks in my mind, and not just because of the numerous Swedes on my mother’s side of the family. Clearly New Jersey has mastered the strip mall, got sprawl and blight down pat, and even my new favorite diner is at best nondescript from the outside, but it turns out we could have toured a charming old downtown if we had just continued on with a dogleg to the left.

But don’t take my word for it, there’s this from the borough’s website: “If there was an adjective to describe a small, rural yet metropolitan respite from the typical, been-there, done-that suburbia — that word would be Swedesboro.”

A wry and winking delivery as municipalities go. Their Scandinavian forebears would be proud.