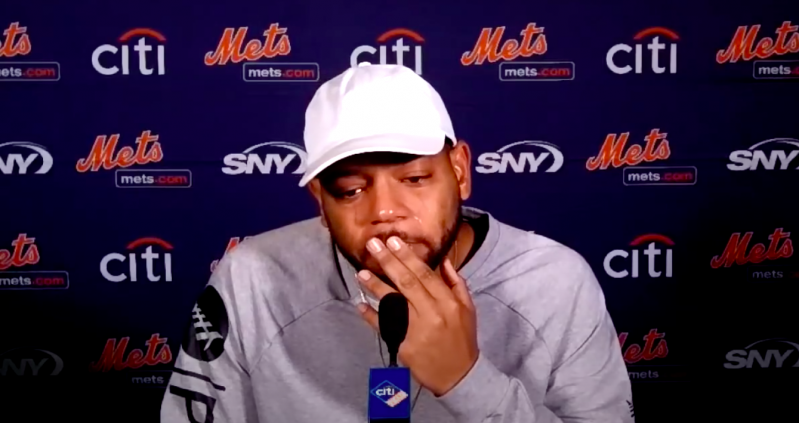 The Mets’ Dominic Smith at his Aug. 26 press conference, which ranged into issues of social justice.
By Baylis Greene

I always liked Dominic Smith. The good-natured, soft-spoken dude from somewhere deep in the Los Angeles megalopolis. The guy who lost the 2019 competition for the Mets’ first-base job to Pete Alonso, his buddy, who stayed his buddy after going on to a rookie year “for the ages,” as the sportscasters say.

It isn’t every day that a professional athlete steps out from behind the clichés, the celebrity, and the video games to reveal his honest self, as Smith did last week, tears streaming down his face as he spoke to reporters after being the only Met to take a knee in protest of the police shooting of Jacob Blake in Kenosha, Wis.

“For this to continuously happen,” he said after a long pause and with a weary headshake, “it shows the hate in people’s heart, and, I mean, that just sucks.”

“It was a long day for me,” he said in his logo-less white cap, fielding questions in a gripping nine-minute press conference, well worth calling up online, that only got more moving as it progressed — into his work in inner cities, for one thing, “to bring happiness” to the generation coming up. “I didn’t grow up with money, so that shit don’t mean nothing to me. . . . If you can give your time, that’s what matters . . . that’s the only way we can change.”

His summation, “Being a Black man in America, it’s not easy,” should probably go down in the annals of sports.

Before the next day’s game the entire team walked off the field in protest.

That was a shocker for staid, tradition-bound baseball. As was the Black Lives Matter shirt left covering that sacrosanct territory, homeplate.

The Milwaukee Bucks started it off with their walkout, the entire N.B.A. followed suit for a couple of days, and, who knows, if enough of these godlike figures press the point, attitudes might even shift, such is the hold they have over especially the young white men and boys of the nation.

In the meantime, Dom’s been having a breakout time of it. Dealing with his sleep apnea a year ago was a big help, weirdly enough, another lesson for the kids out there, and then in this shortened season, at left field, first base, or as a D.H., he’s hitting .326, as of Monday, with seven home runs, and, after racking up yet another that night, 26 r.bi., one more than all of last year. His .685 slugging percentage (total bases reached divided by plate appearances) is third in the majors.