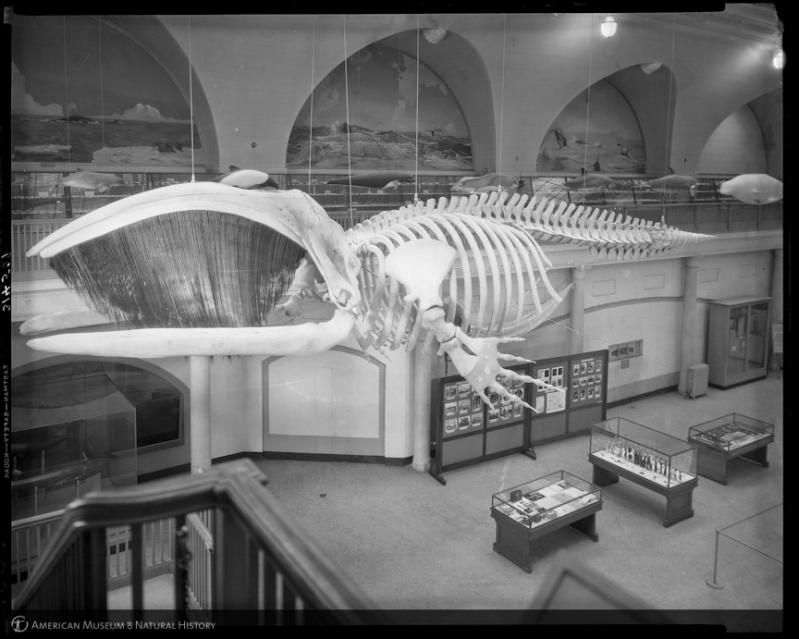 The 1907 "Edwards whale" in the American Museum of Natural History.
By Bess Rattray

I am extremely bent out of shape about the apparent near-future extinction of the Atlantic right whale. We’ve come to normalize, to accept with barely even a blink, the destruction and deletion of animal species from the face of this Earth: It didn’t make headlines two weeks ago when the World Wildlife Fund’s “Living Planet Report 2020” revealed that we lost two-thirds of Earth’s animal species over the last 50 years. But does anyone want to live in a world where we killed off all the right whales?

What can we do about the right whales?

As generations of my family, now, have been eager to inform you on any pretext and at the drop of a hat, my forefathers were whale-killers. It is somehow pleasant to be able to brag about antecedents who were prominent in such an iconic American pursuit — like having a great-grandpa who was a Texas Ranger or, in some circles I suppose, rode to inglory with the Confederate cavalry.

I hold this ancestral whaling past in my mind as perfectly compatible with not wanting the right whale to go extinct in 2020. The whale-killers of ye old long ago regarded their adversaries with the highest respect; indeed, they were more intimately familiar with them — their hulking bodies, their whims and rages, their warm insides — than any other human beings ever were or are. Until they started shooting the whales with explosive-loaded harpoon cannons, in the 1920s or so, the man-versus-whale death battle was rather more of a fair fight. Raise your hand if you’d like to push into the February surf at Amagansett in a 30-foot wooden boat, armed with oars and a long spear, to try to stab deep through the slippery hide of a 150,000-ton beast.

Sea stories of captain-like valor are among those genealogical legends — see also: other families’ yarns about great-great-grandpa’s years as a cowboy on the Shawnee Trail —  that become so deep-seated in an individual descendant’s consciousness that you can’t separate what the family heroes did from your own sense of self. Even though the last actual sea captains in my family died in the mid-20th century, I’ve had dreams at night in which I am swimming against the current, underwater, in a trench in Gardiner’s Bay that runs alongside of where the bunker-fishing docks used to be at Promised Land. I know what it looks like down there, among the rusted litter of the long-ago menhaden-oil industry, even though I’m not even quite sure how I know that there was once a dredged trench in that place.

I imagine Westerners who descend from buffalo hunters of the white-invader sort, like Wild Bill Cody, dream at night of riding west from Leavenworth on a pinto-spotted American paint among the sagebrush and needlegrass. We exalt bison-killers but wouldn’t want to live in a world without bison. The whaler needs the whale and Bat Masterson needs the buffalo.

(And as an aside, despite this romanticization of the past, I don’t go in much for whale tchotchkes and spouting-whale knickknacks. I doubt that the descendants of Nantucket deep-sea whalers sport needlepoint-whale belts or whale-embroidered slacks in Lilly Pulitzer pink and green, either. I’m pretty sure this old, traditional emblem of the New England WASP elite originated with the tourists. Anyone with even a passing familiarity with whaling associates “whale!” in their mind’s eye more with a boiling cauldron of bubbling, stinking, bloody fat — less with the golf links at Newport National.)

Did you hear the BBC Radio report recently about pods of orcas attacking pleasure craft off Spain and Portugal? It’s true: Orcas are ramming recreational boats in the Eastern Atlantic, from Galicia to Gibraltar — ramming them as many as 15 times in one assault — and no one knows why. In August, whales “harassing the yachts” became such a problem that the authorities issued warnings to boaters on marine radio. According to The Telegraph, one frightened sailor said the orcas’ maneuvers felt “totally orchestrated.” Some boats were damaged so badly they had to be towed back to shore. The experts are baffled.

Why are they baffled? Go, whales! I say. Team Whales.

I’ve always somehow felt as if I ought to be able to talk to them, talk to the whales — like Kahu Paikea Apirana, the 12-year-old Maori girl in the fantastic 2002 movie “Whale Rider” — but this is obviously B.S. Why would the whales want to talk to me?

I’ve only ever had one close encounter with a whale. It was in the Johnstone Strait, a channel at the north of Vancouver Island, in British Columbia, and I was cruising along in a boat built by my then-future, now-ex-husband, when he noticed a silent orca rising and diving rhythmically as it followed us, very closely, in our wake. We cut the engine and sailed on smooth and quiet. I called to the whale. It followed silently for a long time. I like to think it was sizing up the enemy.