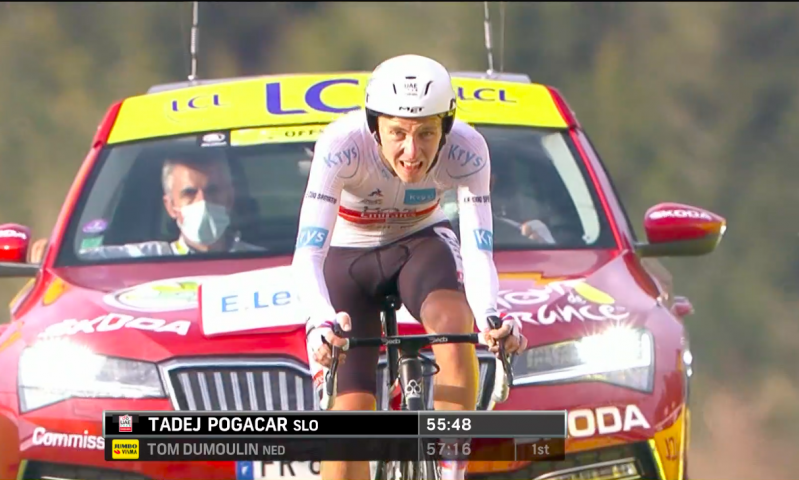 I never thought I’d say this, but man, do I miss the Tour de France.

From Aug. 29 to Sept. 20, minus those two Blue Monday rest days, it was my late-night routine. I’d check in with NBC Sports online and sit mesmerized by the whirring chains and rolling tires, the colorfully clad if nearly skeletal riders in saddle, the greenery and farm fields, the buttressed churches and crumbling castles of the French countryside, to say nothing of the masked and numerically diminished but still game and occasionally costumed fans crowding the roadways of a land I’ve never visited and wonder if I ever will.

The fact that I don’t have cable for live viewing meant this was no mere background comfort in troubled times, the way some people will put golf on the television as a relaxant, with its birdsong, hushed galleries, and murmuring announcers. No, I was relegated to 20-minute highlights on my laptop each night, for each of the 21 tour stages, and that was enough, so skillful was the editing, so eye-pleasing the camerawork.

The videotaping motorcycles are famously, almost intrusively part of the race, capturing grueling mountain ascents and hair-raising, barely controlled descents, but I don’t know when I’ve seen better sporting use of aerial shots, as the peloton surged amoeba-like through villages or was cleaved as it negotiated monuments and traffic circles, or simply pounded away beside barge-coursed rivers.

“It’s been a tough week for the 150 survivors of the Tour de France” was a typical introduction from the amiable British host, Phil Liggett, as the riders prepared to leave the Alps on Stage 18, “and alongside me, well, not quite, as I say, but in the U.S.A.,” working remotely, that is, “is Bob Roll,” who clearly shares Liggett’s engaging joy in the sport, and might be the best color commentator going, with his mix of jargon-free enthusiasm and remarkable knowledge, given the sheer number of participants and the subtlety of the time rules and team strategies.

It all went off better than expected, what with the pandemic restrictions, the unprecedented turning point coming on the next-to-last day, Saturday, as one Slovene rider, Tadej Pogacar, “in all sorts of agony,” hammered the pedals to surpass a countryman, Primoz Roglic, for two weeks the leader and expected winner, with an epic 22.5-mile ride in the mountain time trial, opening up a 59-second gap.

All of 21 years old, Pogacar, in a final interview after he’d won the whole shebang Sunday, was humble, maybe even morose, in a Central European way, as he curiously bad-mouthed another celebration that happened to fall the following day: “Sorry, but I’m not really a fan of my birthday.”

Call it a deflection of the spotlight. And now my own attention must turn to finding a way to stream the French Open.