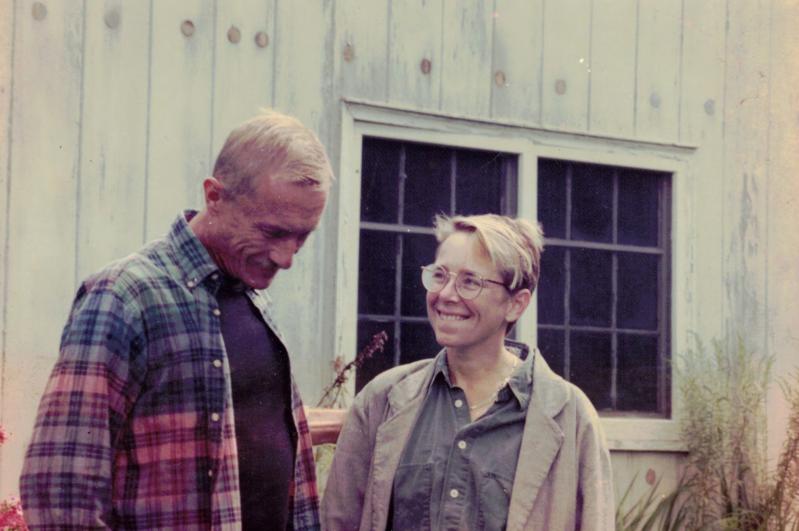 Carl Lindgren and Carol Sevick in Vermont in the early 1990s.
By Baylis Greene

There was a taste of it Saturday. Snow. Wet, heavy flakes, and then it was over as soon as it had begun. But the stuff does trigger the memories, doesn’t it?

In one I’m a kid forming snowballs on a hill in the piney woods above my uncle’s house outside Putney, Vt. If I threw them as hard as I could over the tree line, I could just reach the quiet two-lane far below, where they’d hit the tarmac with a satisfying pop, the explosion traced in white on black. And if I did try to tag a car, I know I never connected.

Inside that house the woodstoves burned. Better yet, there stood an old-fashioned wood-fired cooking oven, heavily used. The Pousette-Dart Band on the hi-fi. Coffee in the French press. Bottles of beer in the aging Sears Coldspot fridge. Contentment.

But if you can imagine stepping out of that warmth into the sharp winter air, the condensation of your breath, the stars, a short path leading from the house, and then a wall of stunning heat as you entered a shed where the pottery was fired. That was his life, as I saw it.

He and his partner, Carol, were able to support themselves as potters. Mind you, it was the 1970s. And rural Vermont. In fact, someone out there reading this might remember him. Carl Lindgren. I know there’s been more than one Carl Lindgren around here, but this one had a pottery studio for a time at the corner of Jermain Avenue and Hampton Street in Sag Harbor, that little storefront that now sells children’s clothes. He had an apartment above it.

Later he came out and left Vermont for San Francisco, which was less of a cliché then, I gather. The funny thing was Carol came out in the other direction. Could that have been expected? I don’t have the answer.

Honestly, there’s not a lot of space to go into weighty matters in a column like this. And you might wonder, as I have reading pieces on this very page over the years, what exactly is the point of a personal reminiscence, beyond navel-gazing. What of significance does any memory offer a reader? I’d say maybe it encourages reflection on someone who helped make you who you are. That’s the best I can do.

I looked up to more than emulated Carl, his purple velvet pants, tight T-shirts with bold horizontal stripes and a chest pocket for cigs, his Citroen and later Austin Mini. The long 10-speed bike rides to the beach, where he’d spend all day far from the crowd with little else but a towel. He came to be someone I could ask advice of in college, while remaining resolutely lost.

He contracted AIDS out in San Francisco. Mid-1990s, before the superdrugs. When he was clearly failing, my parents admirably flew him back here, his cat, a Russian blue, in tow, to die in their house. Couldn’t have been easy.

The last time I talked to him, years before, I was driving him to the airport. A lot was unsaid, but I did manage to ask him if it really had been as good as it looked, as ideal, his life as a potter in Vermont, the snowy winters, the woodstoves, the kiln out back.