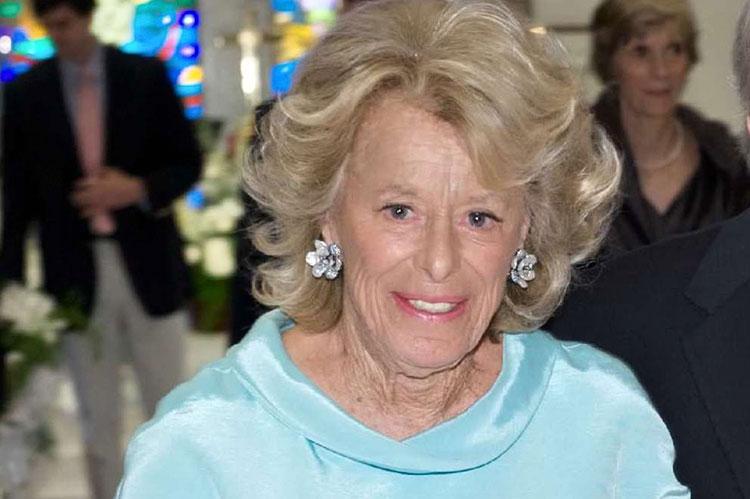 Lynda Scheerer Stokes a former chief executive officer of the Mark, Fore & Strike resort wear chain, died at home on Pondview Lane in East Hampton on June 21. The cause was ovarian cancer. She was 95.

Mrs. Stokes was passionate about family values, love for her country, and the dignity of work, her family wrote. She adored her friends, her family, and an occasional drink called the "hummer."

She was an enthusiastic golfer who won multiple club championships spanning five decades at clubs including the Maidstone Club in East Hampton, the Essex County Country Club in West Orange, N.J., Eastward Ho! in Chatham, Mass., and the Gulf Stream Golf Club and the Little Club, both in Gulf Stream, Fla., where she spent winters. She had the distinction of shooting her age well into her 80s, and of having beaten both her mother and her daughter in a club final.

Also called Stumpy, Auntie Car, and Gaga, Mrs. Stokes was a competitive tennis player, an outstanding bridge player, and "an absolute shark at backgammon," her family wrote. She was also a regular on the ski slopes at Bromley Mountain in southern Vermont and a member of the Bromley Ski Patrol.

Lynda Sheerer was born on Nov. 13, 1925, in Llewellyn Park, N.J., the eldest child of Paul Scheerer and the former Gladys Knight. She grew up in Llewellyn Park and graduated from the Ethel Walker School in Simsbury, Conn.

She and John William Tiernan were married in 1949, and in 1954 the couple moved to Delray Beach, Fla., where they raised a family. When Mr. Tiernan, who led Mark, Fore & Strike, died in 1973, Mrs. Stokes, at 49, became the chief executive and chairwoman of the board. Under her leadership, the company doubled its revenues and launched a direct-to-consumer catalog that would sustain it for years to come.

She married Alexander Coxe Stokes of Philadelphia in 1974. The couple lived in Philadelphia and in Gulf Stream until Mr. Stokes's death in 1997. Both of Mrs. Stokes's husbands were recipients of the Distinguished Flying Cross for their service in World War II.

In her last days, she was surrounded by her family, caregivers, and, her family wrote, a motley crew of beloved characters that only she could assemble. She was spirited and resilient until the end, they said.

A private burial was to take place this week, and a celebration of her life will happen in Gulf Stream in the winter.

Mrs. Stokes's family has suggested contributions in honor of her late son to the CRC Recovery Foundation, 309 NE 1st Street, Delray Beach, Fla. 33483, to the attention of the Scott Tiernan Fund.