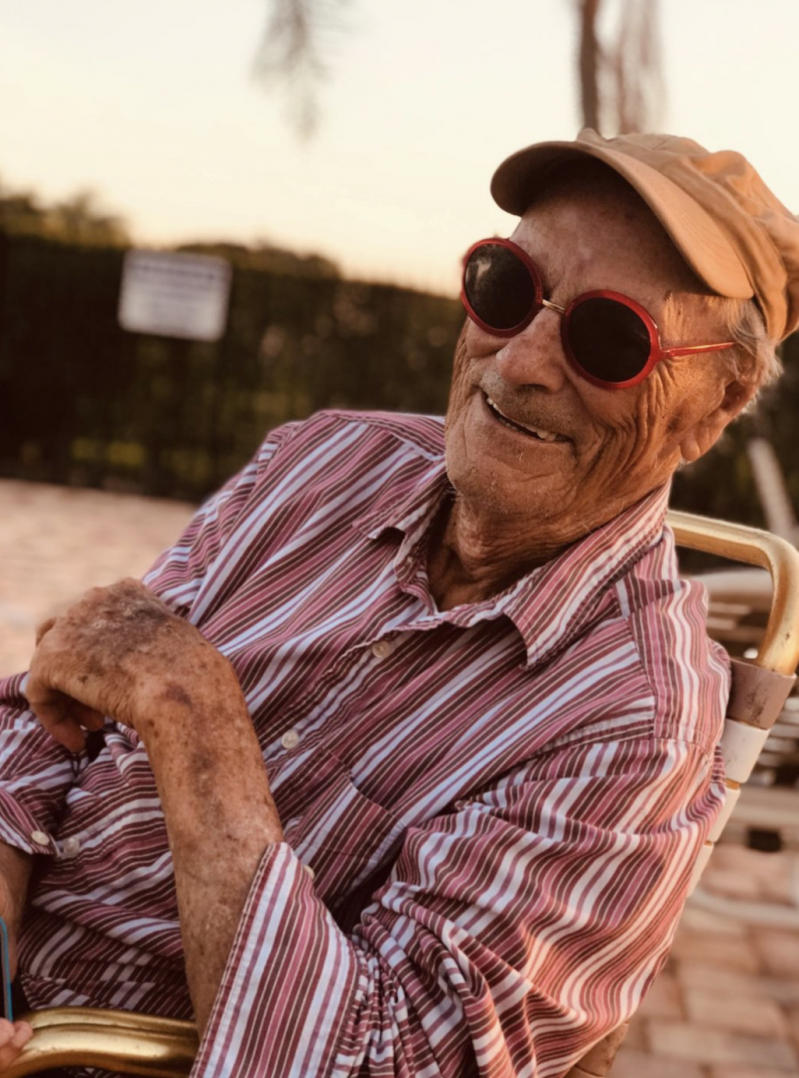 Springs residents may remember seeing Redjeb Jordania not all that long ago, riding his bicycle with a blue denim cap on his head and no helmet — a tall man with a lanky, angular frame and an often bemused smile on his face. Mr. Jordania, a boatbuilder, author, college professor, teacher, trained musician, arranger, and composer who played the piano for ballet companies in Paris during the Roaring Twenties, and a longtime resident of Springs, died last Thursday at his home there, surrounded by family. He was 99 and had been ailing for only a short time.

Shortly before his birth, on Dec. 10, 1921, in Vanves, near Paris, his family was forced into exile when their country, the Democratic Republic of Georgia, was invaded by the Red Army. His father, Noe Jordania, had been the short-lived nation's first president; his mother, Ina Koreneva, was Russian. He was the youngest child in the family; his father spoke to him in Georgian, his mother in Russian, and he answered them in French.

He grew up, like many political exiles of the time, in Paris's emigre community, among Georgians and friends from other ethnic groups who had fled the huge area taken over by the invaders, attending the municipal school of Vanves, the Lycee Michelet, and the Free School of Political Sciences, where he studied diplomatic history and law.

In 1960, Mr. Jordania arrived in the United States, where he earned two master's degrees, one at Rutgers and the next, in philosophy, at Yale. He was preparing to write his Yale Ph.D. thesis when a lifelong passion for the sea claimed precedence and he abandoned his research to design and build a 30-foot sailboat.

During the decades that followed, Mr. Jordania taught French, Spanish, linguistics and more at several colleges, among them Ursinus College, New York University, and Fairleigh Dickinson University. At Hartford (Conn.) Community College, he was head of the French department and co-wrote a textbook on how to learn the language.

With the dissolution of the Soviet Union, Mr. Jordania began making frequent trips to Georgia. In 1998, he helped the Harriman Institute organize a Georgia Awareness Day in New York City; that same year, the institute co-sponsored the Noe Jordania Conference in Tbilisi, marking the 80th anniversary of Georgia's declaration of independence. As recently as the 1990s he imported American teachers to teach English at a high school in Tbilisi, a program that continued for 10 years.

He and his wife of 41 years, Peggy Backman, a psychologist and psychotherapist, bought their house in Springs in 1985. They kept an apartment in the city as well, where he enjoyed building boats at the South Street Seaport Museum's Pioneer Marine School. By 1987 his talents and reputation had become known at Southampton College, which made him an associate professor in its Seamester program. He taught literature of the sea and sea history to students aboard the 125-foot schooner Spirit of Massachusetts, based in the Bahamas, for about nine weeks. (That same year, he told a Star reporter that he could not account for his passion for the sea. "However," he said. "I have a sneaky suspicion I was conceived on a cruise.")

David Swickard, who was then the director of the East Hampton Historical Society, enlisted Mr. Jordania to head the society's Boat Shop on Gann Road in Springs, where the boatbuilder helped to restore the 25-foot Senad, said to be the oldest Great South Bay catboat around, dating from the turn of the last century.

"Redjeb reinvigorated that program and turned it into an attractive community workshop for repairing and constructing wooden boats, attracting a wide variety of people ranging from young adults to senior citizens," Mr. Swickard said. "He also was a great friend for almost four decades — a scholar, writer, and composer, who was imaginative, thoughtful, whimsical, and passionate in every art and craft he essayed. He was a great role model for me, and anyone else who wants to live a long life filled with good energy and love. I will miss him greatly."

"He was unique — he broke the mold," said another friend, Jeanie Stiles of East Hampton. "So many interests. We loved having him to dinner. Instead of making him sing for his supper, we would ask him to play the piano. He could play almost anything from memory; never needed music — a great musician."

Mr. Jordania was a composer not only of music for piano and violin, but of chamber music as well. This man of many hats even owned a company, the Back and Forth Company, through which he sold plans and kits for his Uqbar dinghy, a 10-foot sailing or rowing pram that can be carried and launched by one person. McGraw-Hill published his "Building the Uqbar Dinghy" in 2014. Among his books are "All My Georgias: Paris-New York-Tbilisi," a memoir; "Escape From the South Fork and Other Stories," "New York au Ras les Rues: Vignettes des AnnŽes 70," and "Noe Jordania, Father of Modern Georgia." His music compositions include "The Chamber Music of Redjeb Jordania, Vol. 3," and "Percussion Concerto, Perkiomen Suite for piano."

A frequent contributor of letters and essays to The Star who was himself the subject of many pieces, Mr. Jordania is survived, in addition to his wife, by his daughters, Nicole Jordania of New York City and Taris Jordania of Oakton, Va., all of whom were with him when he died. He also leaves a son, Zoltan Jordania of Brittany, France; a grandson, Nicholas Kvitashvili of New York City; five nieces, and their children and grandchildren. His two sisters, Nathela Jordania and Asmati Jordania of Paris, died before him; a brother, Andreika Jordania, died at 12 in Georgia.

Ms. Backman said that her husband was on the computer, either playing backgammon with people from around the world or reworking his musical compositions, almost until the end.

Mr. Jordania was cremated. The family will receive visitors at the Yardley and Pino Funeral Home in East Hampton on Saturday, between noon and 1, at which time there will be a memorial service. Memorial donations to the American Friends of Georgia have been suggested, online at afgeorgia.com or P.O. Box 1200, Truro, Mass. 02666.