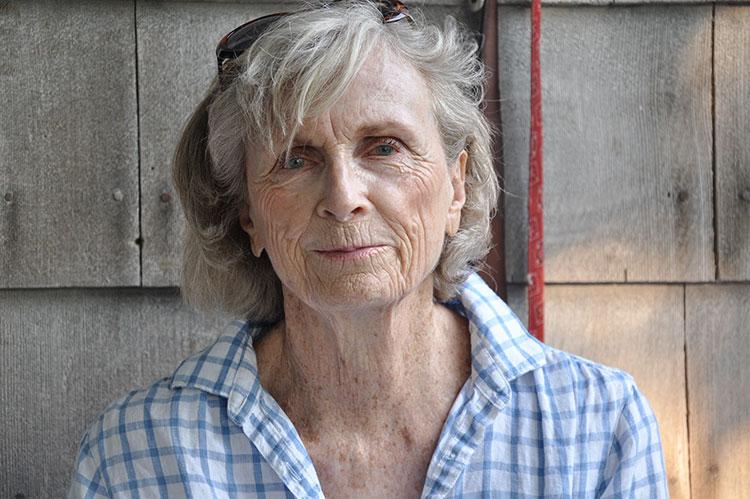 Idoline Scheerer, a fixture at Georgica Beach for more than 65 years, built a revered and enviable community of friends and family at her century-old shingled house behind the dune.

"This summer home on the beach is reminiscent of how they used to be," wrote Laura Donnelly for The East Hampton Star's East Magazine in the summer of 2016. "Doors and windows left open, no air-conditioning, a big metal farm pail by the door to rinse the sand from your feet. . . ." Mrs. Scheerer was determinedly old school, taking great care to change as little as possible about the house and its accompanying traditions. "All I can say is I am the luckiest person in town," Mrs. Scheerer wrote to Ms. Donnelly for the East piece. "I have a big family that loves the ocean and good food. And we are lucky enough to be able to continue what has been going on here since 1945."

On some summer and fall weekends every bed in the house — 12 — was filled with three generations: Mrs. Scheerer's four children and their partners, Tom Scheerer and Mike Baldridge of New York City and Paris, Jane and Simon Parkes of East Hampton and New York City, Laura Lochrane of Ojai, Calif., and Idoline and Biddle Duke of Springs, and her six grandchildren, Homer Parkes of Los Angeles, Haley Parkes of Queens, Sophie and August Whitney of Ventura, Calif., Ellie Duke of Santa Fe, and Angie Duke of New York City. All 15 of them shared meals, laundry, house cleaning, and gardening chores.

Despite a colon cancer diagnosis three years ago, she had been "full of vigor up to her final months, and then declined somewhat quickly," wrote her granddaughter Ellie Duke. She died on Feb. 27 at 89, surrounded by her children and grandchildren.

Born Idoline Lochrane Crabbe on Dec. 5, 1931, in New York City, Mrs. Scheerer first came to East Hampton in the early 1940s with her grandparents. They stayed at the Sea Spray Inn for the first few summers before buying the house on the corner of Lily Pond Lane and Ocean Avenue, which they later sold. Though her 89 years were filled with world travels, home base was always Georgica Beach.

She married William Scheerer in 1954, and spent every summer thereafter in East Hampton at his family's house on West End Road, which her in-laws bought from the humorist and sportswriter Ring Lardner in 1945. Mrs. Scheerer and her husband raised their four children in Essex Fells, N.J., and later moved to New York City, where she lived for 45 years until she moved to Greenport in 2016.

"Scheererville, as the house on West End Road was known to several generations of friends and family, was for half a century a welcoming revolving door of people who dropped by to say hello, raid the fridge, grab an outdoor shower, have a drink, park their cars, or stash their bicycles to go the beach. Surfers would keep their boards there, but not without stopping by the kitchen porch, Mrs. Scheerer's favorite perch, to pay their respects before running over the dune," her granddaughter Ellie Duke wrote.

"Mrs. Scheerer was as much a part of Georgica Beach as the jetties and the Coast Guard Station garage," commented Kathleen Mulcahy, the mayor of Sag Harbor, who has spent 62 summers at Georgica. "She was a role model, as a matriarch whose children and grandchildren flocked to her, as a hostess for a stream of house visitors staying for lunch or 'just parking,' and as the goal for how to age gracefully while still living life fully. Seeing her swim in the ocean just this past summer, surrounded by her children and grandchildren, was a perfect vision of our very fortunate lives on Georgica Beach."

In her later years, Mrs. Scheerer had many "lifeguards" — beach friends who she would ask to accompany her into the water. "She wasn't afraid to brave the cold or the waves, sometimes to her lifeguards' alarm," Ms. Duke wrote. Her last swim in the Atlantic was in October, at 88 years old.

Although she was a full-time mother, Mrs. Scheerer volunteered as a mentor and tutor with various organizations and for many years served on the board of the Women's Prison's Association. She returned to school in her 40s, graduating from Columbia University with a degree in English.

"Those who were lucky enough to join Mrs. Scheerer for a swim in the ocean, a cocktail on her porch, or an international bike trip know what zest for life she had," her granddaughter wrote. "She had a shrewd sense of humor and an undeniable charm and confidence. She had a way of making you sit up straighter in your chair — her praise was hard-won and precious. She was a great lover of words: a voracious reader, crossword and Scrabble wiz, wordplay master, and great rememberer of naughty jokes, always told with expert comedic timing. She joined Instagram at the age of 81 and took great pleasure in following along on the escapades of her family and close friends. A like or a quippy comment from Gaga, as she was affectionately known, was a coveted seal of approval."

A memorial will be held in East Hampton this summer.

The Outdoor Agenda 09.17.21
A Surf Meetup for Youth
I-Tri Ride and Wine Is Saturday
END_OF_DOCUMENT_TOKEN_TO_BE_REPLACED