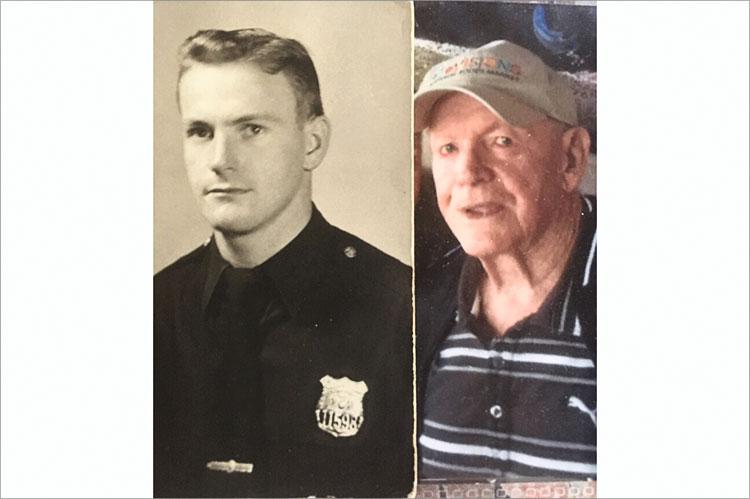 Longtime readers of The Star may remember the many letters to the editor written by Larry Darcey of Sag Harbor over a 20-year span (at least). Mr. Darcey, who was 90, died on July 7 at the Long Island State Veterans Home in Stony Brook. He had been in declining health for a few years.

A Korean War vet, Manhattan police officer, teacher, and community volunteer, he worked diligently to improve the lot of troubled youth, immigrants, and the homeless. With a master's degree in divinity, he "had a huge impact on others' lives and was a real social justice warrior," his family said. "The entire Darcy clan has been deeply influenced by his morals and sense of fairness."

Lawrence George Darcey was born in the Bronx on July 31, 1929, to Joseph Darcey and the former Elsie Russrucker. He grew up there, attending a one-room schoolhouse as a child and graduating from DeWitt Clinton High School.

He joined the N.Y.P.D. in Manhattan after high school, going on to a 30-year career and retiring as a lieutenant, all while doing many other things. As a member of the Naval Reserve, he was called up during the Korean War and served as a signalman on a troop transport vessel.

While he and Patricia Feeney were courting, they danced on roller skates to live music at a rink in Mount Vernon. They married in 1952 before he was called up. Upon his discharge, and with their first child, the couple lived for a time in the Bronx, then in Port Washington, and then, with two children, in Melville, whence he commuted to the city for his job as a policeman, simultaneously earning a B.A. in criminal justice from John Jay College.

Mr. Darcey also volunteered in the city at Covenant House, a center for homeless and troubled young people, and attended Mass at St. Francis Xavier Catholic Church. After leaving law enforcement he earned the MDiv. degree at a seminary near the family house, and thereafter taught peace and justice at St. Anthony's Catholic High School in Huntington while volunteering at a Big Brothers-Big Sisters program there.

The Darceys, both of whom grew up as only children, were eventually to have six of their own. In 1987, after all were grown and mostly gone, they moved to Sag Harbor, where Patricia Darcey ran the health services-at-home office at Southampton Hospital. Her husband taught part-time at Mercy High School in Riverhead for about two years and volunteered at Habitat for Humanity and with various East End groups helping to feed immigrants and the homeless.

He was also active in the Catholic, Quaker, and United Unitarian communities in Sag Harbor, often giving talks on issues of social conscience. Together, the couple joined an antiwar group, Pax Christi, in Wyandanch, taking part in peace demonstrations in Washington, D.C., and elsewhere.

Mr. Darcey was a regular guest on LTV, the public television channel here. He appeared on some 135 episodes of "East End Veterans," a weekly half-hour show in which the "regulars met on air and discussed their service years and all things military and political," said Genie Henderson, one of LTV's founders and its archivist. "This, to me, was always one of the primary 'poster' shows for public access television, a platform for public commentary by regular folks, not slick network fare or overproduced documentary."

Her husband "loved and challenged his children, grandchildren, great-grandchildren, and students to lead a purposeful life and serve others," Ms. Darcey said. "Go through life with your eyes wide open, miracles happen all the time. You just have to be open to them," he would tell his family.

The children, all of whom survive, are Joseph Darcey and John Darcey, both of San Diego, Patricia Darcey-Walsh of Geneseo, N.Y., Mary Darcey-Martin of Ithaca, N.Y., Larry Darcey Jr. of Wading River, and Dr. Dennis Darcey of Graham, N.C. He leaves 16 grandchildren and 15 great-grandchildren.

Mr. Darcey was cremated. The family plans a memorial service in Sag Harbor once everyone is able to gather safely. Donations in his memory have been suggested to Pax Christi, 255 Oakland Avenue, Port Jefferson 11777.