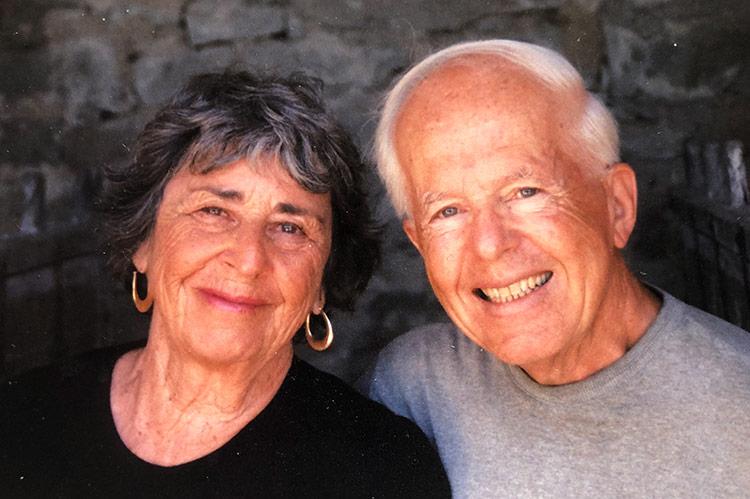 Ed Porco and Joan Powers Porco, longtime residents of Montauk who more recently lived at Peconic Landing in Greenport, died last week of Covid-19 within four days of each other. They had been ill for two weeks.

Mr. Porco, a past president of the Concerned Citizens of Montauk, died on March 24 at Stony Brook Southampton Hospital at the age of 89. His wife, a journalist, teacher, social worker, Gestalt psychotherapist, poet, and author, died on March 28 at Eastern Long Island Hospital; she was 90.

They first met in 1959 at a New Year’s Eve party. Nearly 20 years later, after both were divorced, their friendship turned into romance, and they married on Nov. 18, 1977.

The Porcos moved from Port Washington to live full time in Montauk in 1996. They gave their house a name: Gaudeamus, Latin for “let us rejoice.” This they did in abundance, sharing a passion for classical music, hiking, traveling, political activism, their family, and their beloved hamlet.

“Their deep love and respect for each other sustained and nurtured them through good times and hard times, and was born of great friendship, trust, and respect for their differentness,” their family wrote.

Mr. Porco was born in the Bronx on Sept. 6, 1930, to Peter and Maria Teresa Porco, who were Italian immigrants. At City College of New York, he earned a bachelor’s degree in business, and later took a master’s degree at the New School. He had a successful career as a commodities trader with E.F. Hutton, Bache, and Co., retiring a few years before moving to Montauk.

Ms. Porco was born in Brooklyn on Feb. 22, 1930, to Maurice Steinberg and the former Rebecca Gutterman. She grew up there and in West Palm Beach, Fla. She held a bachelor's degree in sociology from New York University and a master's in social work from Adelphi University. She also took postgraduate training at the Gestalt Center of Long Island.

She was a lifelong political and civil rights activist who wrote many articles, columns, and contributed poetry for East End papers and The New York Times. She published a volume of poetry called “Gaudeamus,” and wrote the history book “Holding Back the Tide: The Thirty Five-Year Struggle to Save Montauk” for the Concerned Citizens of Montauk.

Both were dedicated to Montauk. Ms. Porco was on C.C.O.M.’s community relations committee; her husband was board member of the organization in addition to his time as its president. He was passionate, the family said, about environmental preservation and conservation in general. First the secretary and then a two-term president of the East Hampton Trails Preservation Society, he served from 2005 to 2011, and was part of the team that completed the last section of the Paumanok Path in 1998.

Mr. Porco also led local hikes and organized hiking trips to Costa Rica, Tuscany (he was fluent in Italian), New Zealand, the Cotswolds, Patagonia, and Croatia. In 2007, he received the George Sid Miller Jr. Friend of the Trails Award.

At Peconic Landing, Mr. Porco was on the Council for Lifetime Learning, teaching history and leading the Great Decisions program.

Both Mr. and Ms. Porco are survived by children from their first marriages. Mr. Porco is survived by a daughter, Elizabeth Lycke of Montauk.

Ms. Porco is survived by two children, Julia Chachere of Sag Harbor and Matthew Chachere of Brooklyn. Another daughter, Elizabeth Powers Pentz, died before her.

Both were cremated. A celebration of their lives with dispersal of ashes will take place at the ocean in Montauk in the future. The family has suggested memorial donations to C.C.O.M., P.O. Box 915, Montauk 11954.

Trees, Wreaths for Sale in Amagansett
Holiday Cheer Is Coming to Sag Harbor
Even More Thanksgiving Options From the Pike and Old Stove
END_OF_DOCUMENT_TOKEN_TO_BE_REPLACED