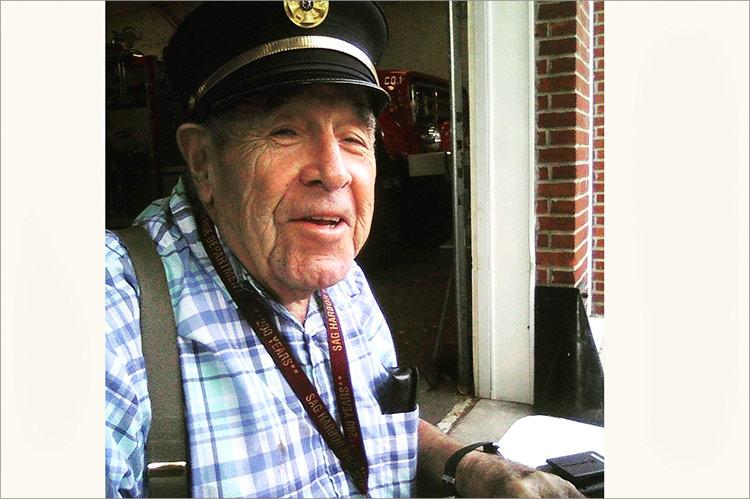 In Thomas W. Horn Sr., the Sag Harbor community had a dedicated volunteer. The oldest member of the Sag Harbor Volunteer Fire Department, its tireless fund-raiser, the founder of the department’s museum, and a former member of the Sag Harbor Board of Historic Preservation and Architectural Review, Mr. Horn died at Stony Brook South­ampton Hospital on Feb. 25 of congestive heart failure and heart valve stenosis. He was 90 years old.

In the late 1970s, Mr. Horn gathered enough support to transform the fire department’s old building on Church Street — once a religious lecture hall, a schoolhouse, a village polling place, a jail, and a fire engine garage — into the Sag Harbor Fire Department Museum. Its collection pays homage to the early days of firefighting in the village. There’s a red 1926 Ford Model T fire chief’s truck and an 1890s hand-pulled hose cart. There’s an array of antique toy fire trucks, old photographs, and brigade-buckets.

“Everything he did was for the family, and then came the fire department and the village,” said Robert P. Horn of Rocky Point, one of his sons. “He loved Sag Harbor.”

Mr. Horn was born on Jan. 29, 1930, in the family house on Hampton Street, to Thomas Theodore Horn and the former Anna Petzoldt. He attended St. Andrew School and Pierson High School, graduating in 1947.

As a child, he had a mischievous streak. At the age of 8 or 9, his family said, Tommy and a friend climbed up inside the steeple of the Old Whalers Church, intending to add their names to those who’d come before them. When he saw his uncle’s name there, the story goes, the boy was in awe, and later couldn’t even remember whether he had written his own.

When Sag Harbor was still a factory town, the young Mr. Horn worked for the Bulova Watchcase Company in various roles before starting his own electrical contracting company, now Thomas Horn and Sons. He ran it for 40 years before passing it down to Thomas Horn Jr. Afterward, he worked for 20 years for the New York Board of Fire Underwriters, retiring in 1995.

In April 1950, Mr. Horn married Eileen V. Muldowney, whose family had spent the summer in Sag Harbor two years earlier. According to family lore, he was sitting on a bench on Main Street when she passed by, and he whistled at her. Two weeks later, at the Sag Harbor Cinema, they were formally introduced. They built a house on Meadowlark Lane in the early 1950s. The couple had six children, one of whom, Charles Frederick Horn, died in 1969. Mrs. Horn died in 2018 after nearly 68 years of marriage.

Her husband joined the Sag Harbor Fire Department 69 years ago. In August 1965, when there was a fire at St. Andrew Church, Mr. Horn, a born-and-raised Catholic, helped rescue the statue of an angel from the altar. He rose through the department ranks, and was its chief in 1978 and 1979.

Summer after summer, Mr. Horn sold T-shirts and raffle tickets at a folding table on Main Street to raise money for the department and the museum, often joined by his friend Marty Trunzo, another fire chief who was a well-known barber in the village. Mr. Horn, who later joined the fire police, had attended company meetings as recently as December.     On the village review board, he is said to have served under nine mayors. His son Robert Horn recalled him as a civic-minded man who had followed in his own father’s footsteps.

“He was a very kind man, and always looked to find the good in people,” Robert Horn said.

He and Thomas Horn Jr., who lives in Sag Harbor, survive, as does another son, Michael P. Horn of Riverhead, and two daughters, Eileen Alanna Caffery of Southold and Kathleen J. Horn of Sag Harbor. Six grandchildren and one great-grandchild survive as well.