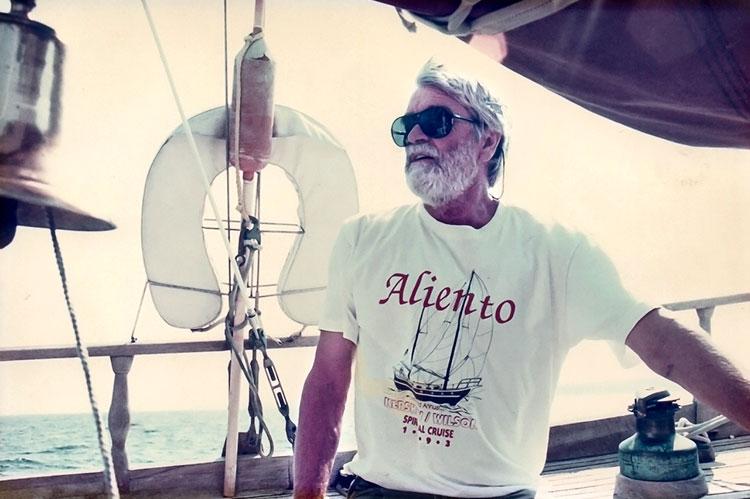 George Arthur Wilson, who started his ministry at the Old Whalers Church in Sag Harbor, ended it at the Springs Presbyterian Church, and sailed the world between postings, died in Mill Valley, Calif., of late-stage kidney disease last Thursday. He was 89 and had been ill for seven years.

Mr. Wilson had deep ties to the East End and its waters, according to his longtime companion, Betsey Crawford. His parents bought 20 acres of land stretching from Old Stone Highway to Neck Path in Springs for $2,800 in 1946. As a teenager, he put an engine on a lifeboat salvaged from a World War II tanker and motored with a friend from the Whitestone Bridge in Queens to Promised Land on Napeague. The journey took 15 hours.

Born in Manhattan on March 14, 1931, to John Wilson and Martha Morton Wilson, Mr. Wilson grew up there and in the Bronx. He graduated from Grove City College in Grove City, Pa., and the Princeton Theological Seminary in New Jersey. He married the former Doreen Jones in 1954 and was ordained at the Old Whalers Church two years later. His marriage to Ms. Jones and a second marriage to Sally MacAleer ended in divorce. Both women survive.

In 1962 Mr. Wilson moved to Southern California, where he held ministries in San Gabriel, Pomona, and Wilmington. After he answered the call for clergy to accompany the Rev. Dr. Martin Luther King Jr. on his 1965 march to Selma, Ala., his ministry became increasingly involved in social justice. He worked on the campaign for George Brown Jr., the first congressman to speak out against the Vietnam War, and sought to generate interest in a film on Dietrich Bonhoeffer, a German Lutheran pastor and anti-Nazi dissident.

Always drawn to the water, he sailed to Hawaii with his son Mark in 1984 and, when he left California in 1987, he sailed Aliento, his ketch, through the Panama Canal and up the Atlantic Coast to Boston with his son Johnathan. He held two pastorates in the Boston area.

Mr. Wilson returned to Springs in 1989 for his last ministry. After retiring in 1993, he got his captain's license and began day-chartering Aliento from Three Mile Harbor. "I met George when he returned to Springs," Ms. Crawford said. "He wasn't hard to meet! He was the most exuberant human being I've ever come across."

In 2000, he sailed with his son Mark and three other crew members to Ireland, from which his parents had emigrated 80 years before. A storm forced a detour to the Azores, and they proceeded to Ireland from there.

In 2011 he took to the road instead of the sea in another vessel, an R.V., with Ms. Crawford. They spent several years traveling from the Canadian Maritimes to the West Coast and from the Mexican border to Alaska before settling in Marin County, just north of San Francisco.

Mr. Wilson was a member of Redwoods Presbyterian Church in Larkspur, Calif., where the Rev. Stephanie Ryder officiated at an outdoor service for the family on Saturday. A Zoom memorial service will be held at a future date, and his ashes will be scattered at a buoy just outside Three Mile Harbor.

In addition to Ms. Crawford, he is survived by three sons, Johnathan Wilson of Apple Valley, Calif., David Wilson of Los Angeles, and Mark Wilson of Oakland, Calif., a daughter, Sharyn Pepitone of Davis, Calif., a stepson, Luke Perrier of Coeur d'Alene, Idaho, 10 grandchildren, and one great-grandson, who was born 10 days before Mr. Wilson died. A fourth son, Scott, died in infancy.

According to his family, "He carried with him his Irish spirituality, zest for life, and ability to never pass up a good conversation. His warmth and sparkling blue eyes will be missed by many."

Ms. Crawford has created a page on her website where friends and family can share reminiscences of Mr. Wilson. The link is thesouloftheearth.com/memories-of-george.

Hoedown on the Farm, Cocktails in the Garden
Main Beach Free Concerts in Final Weeks
Services and Counseling After Death of Popular Teacher Assistant
END_OF_DOCUMENT_TOKEN_TO_BE_REPLACED