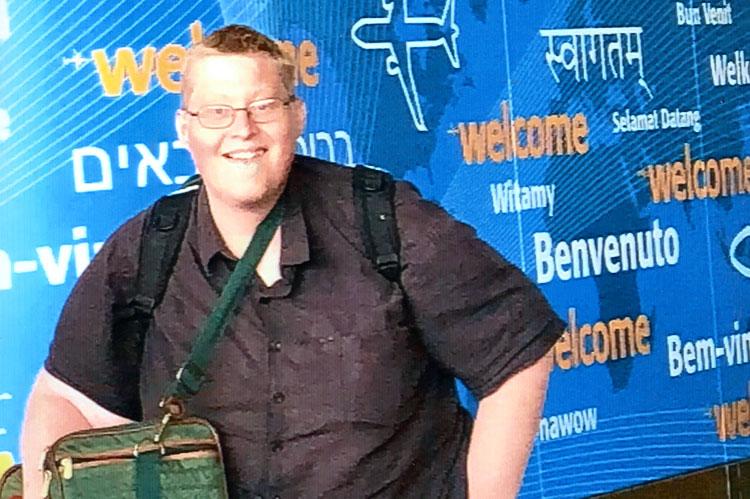 John F. McCluskey, an Amagansett native who loved to travel the world, who loved his dog, and who loved his family above all, died unexpectedly on Sunday in Athens, Greece, where he lived part time. The cause was heart failure. Mr. McCluskey was 33.

"Anyone who met John could tell he was a special person," his mother, Lois McCluskey, said. "His face shone with the sweetness and innocence that is reserved for a very few." Mr. McCluskey, who had special needs, loved to make documentary films with his father as they traveled the world, she said.

John Frevert McCluskey was born on Aug. 28, 1987, in the Forest Hills neighborhood of Queens to John W. McCluskey and the former Lois Frevert, both of whom survive. He grew up on Abraham's Path and attended the Amagansett School, the East Hampton Middle School, and East Hampton High School.

After graduation, travel became his passion. "John went all over," his mother said, including Ireland, which he visited every summer for years, as well as England, Scotland, Wales, Italy, Turkey, Greece, France, and Bulgaria. "The first stop in each place would be the local police station," she said, "where he could say hi to the guys. He loved meeting police officers and always wanted to make friends with them wherever he would be. Of course, East Hampton was always his first love and he knew most of the officers there on a first-name basis."

Four years ago, Mr. McCluskey and his father rented an apartment in the Kypseli neighborhood of Athens. Soon, his mother said, its coffeehouses were vying for Mr. McCluskey's business "because he would actually attract customers. Everyone loved this sweet blond American with his little white dog, Maggie. He would sit, have coffee, and talk about the films he and his dad were working on." His life was not easy, she said, "but he always saw the most positive side of things."

In addition to his mother, who lives in Amagansett, and his father, of Athens and Amagansett, Mr. McCluskey is survived by his sisters, Sharon Johanson of the Bronx and Diana LeBron of Amagansett, and a brother, Brian McCluskey, also of Amagansett. Ten nieces and nephews, including Dierdre McGhee of Sea Cliff, also survive. A sister, Carolyn Rampe, died before him, as did a niece, Hailey LeBron.

Mr. McCluskey, who was a member of Most Holy Trinity Catholic Church in East Hampton, was cremated. The date and time of a memorial service are to be determined.

His family has suggested memorial contributions to the Animal Rescue Fund of the Hamptons at arfhamptons.org.