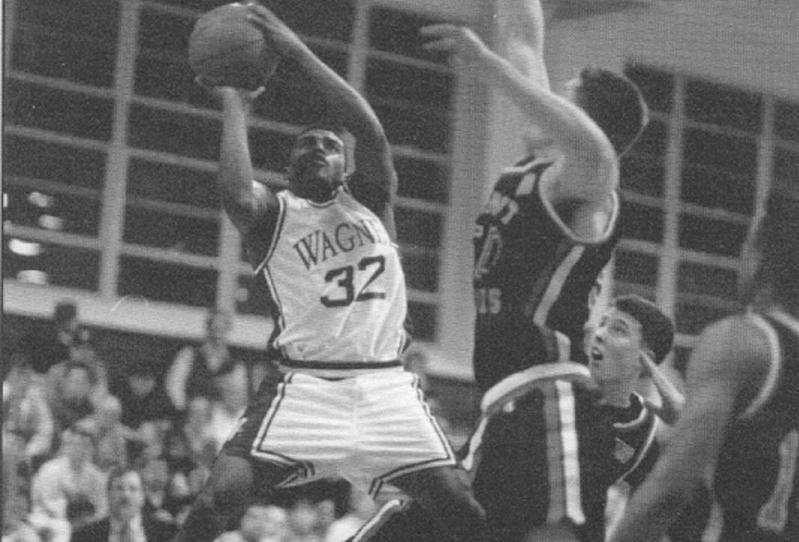 Bobby Hopson, the Bridgehampton Killer Bees' all-time leading scorer, died on Tuesday at the age of 48 as the result apparently of complications arising from diabetes, with which he'd been struggling for the past eight years.

Even so, said his older brother, Carl Johnson, Mr. Hopson, who had been living on Ocean Road in Bridgehampton, had been working for the past year with mentally and physically challenged residents of a house in East Hampton overseen by East End Disability Associates, a nonprofit organization based in Riverhead.

"When Carl phoned me the other day, I was shocked — I'm still shocked," said Joe Niles of Charleston, S.C., who grew up on Bridgehampton’s Maple Lane, “across the street from Carl and Bobby. I’ve known Bobby since I was 4 or 5. They were family. I feel like I've lost a brother."

Mr. Niles, whose late father, John Sr., coached the Bridgehampton High School boys basketball team throughout the 1980s, said his father had “thought the world” of his gifted teammate. He added that Temple University and Wagner College had actively recruited Mr. Hopson following his stellar high school career, during which he scored 1,720 points. "He made the right choice," Mr. Niles said. "He started from his sophomore year on."

Type 2 diabetes had taken "a real toll on his health," said Mr. Johnson, who, with his wife, Lillian, had cared for Mr. Hopson following his return from Florida, where he had been a special education teacher at an elementary school in Orlando.

“He was not only a Hall of Fame athlete, but he was also a Hall of Fame person,” said Tim Capstraw, a Brooklyn Nets analyst who coached Mr. Hopson at Wagner from 1990 to 1994.

Jerry Burns, who recruited him, said, “He played with such a big heart. There was nothing you couldn’t ask him to do. . . . Bobby was one of the guys who turned our program around. It’s sad that he’s no longer with us.”

James R. Engles Jr., now the men’s head coach at Columbia University, who was with Mr. Burns, the head coach at Monroe Community College for the past 30 years, on Mr. Capstraw’s staff at the time that Mr. Hopson played for the Seahawks, said, “We are all heartbroken — he was loved by everyone. He was the epitome of a winner. He was the face of Wagner basketball during his time on the campus. He left a great legacy.”

As for his brother’s ability on the court, Mr. Johnson said, “He could do it all. People think of him as a shooter, but he was also one of the best defensive players Bridgehampton ever had. Plus, he could play anywhere, guard, forward, center. . . . He could shoot the 3, rebound, tip it in. . . .”

And dunk. “Even though he was 6 feet tall,” said Mr. Niles. Troy Bowe, Mr. Hopson’s first cousin, with whose family Mr. Hopson lived during his high school years, said he remembered him as a freshman going up for a dunk near the end of a big win over Center Moriches at the Bee Hive. “He missed it, but the place went crazy.”

Mr. Bowe also remembered Mr. Hopson’s M.V.P. performance in a jaw-dropping win over Boys and Girls High School of Brooklyn at the Nassau Coliseum. “That was Bobby’s coming-out party,” he said. Asked how he’d rate his cousin among Bridgehampton players of all time, Mr. Bowe said, “There’ve been a lot of great Bridgehampton players, but definitely he’s in the top five.” Mr. Hopson holds the school’s single-game scoring record, with 52, which is the number on his retired jersey.

Mr. Bowe recalled lying prostrate and crying on his living room floor in Hawaii (where he was the University of Hawaii’s point guard) when a buzzer-beater by Mr. Hopson’s opposite number defeated Wagner 65-64, thus preventing the Seahawks from earning a berth in the N.C.A.A. tournament. A Wagner College Athletic Department tribute this week said Mr. Hopson’s 32-point performance in that nationally televised game on ESPN was “perhaps his best.”

At Wagner, where he earned bachelor’s and master’s degrees in special education, Mr. Hopson was named to the All-Northeast Conference first team twice, and once to its second team. In his junior year, the Metropolitan Basketball Writers Association named him to its second team. He was inducted into Wagner’s Hall of Fame, as aforesaid, in 2009, at which point he was fifth-ranked on the school’s all-time scoring list, with 1,568 points; fifth among its 3-point shooters, with 192; was second, with a 41.3 average, when it came to 3-point shooting percentage, and was 10th in career field goals, with 511.

Despite his struggle with diabetes in recent years, Mr. Hopson “always wanted to help other people,” said Mr. Johnson. “That’s the kind of person he was.”

He was born on May 30, 1971, at Southampton Hospital, the son of Belvadine and John Hopson, neither of whom survive.

Besides Mr. Johnson, Mr. Hopson’s survivors include a 14-year-old daughter, Kaialani Hopson of Savannah, Ga., three nieces, and a nephew. A memorial service will be held at a future date in Bridgehampton, either at the Community House or at the First Baptist Church, Mr. Johnson said. Donations in Mr. Hopson’s name can be made, he said, to East End Disability Associates, 107 Roanoke Avenue, Riverhead 11901, or to the American Diabetes Association, P.O. Box 15829, Arlington, Va., 22215.

Spring Has Sprung at the L.V.I.S. Shops
An Online Auction for ARF
A Rescheduled Telephone Town Hall With Lee Zeldin
END_OF_DOCUMENT_TOKEN_TO_BE_REPLACED