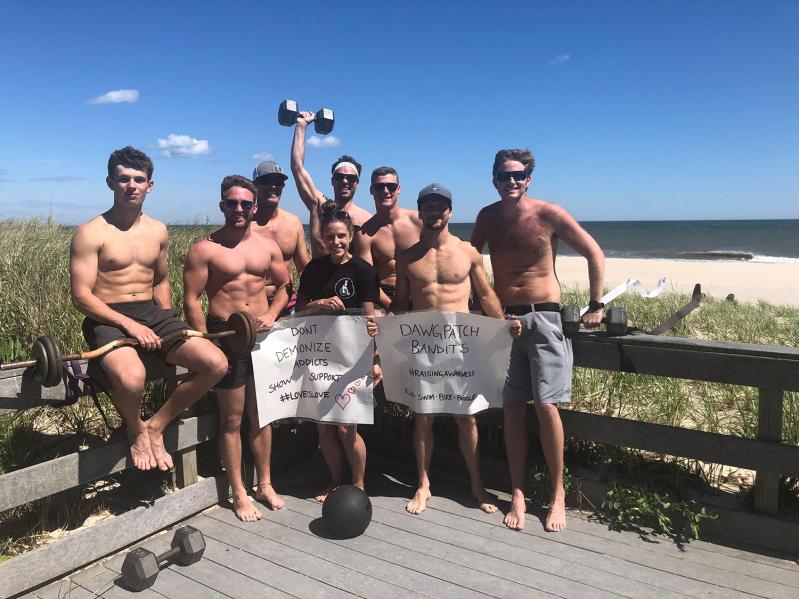 Members of the new nonprofit Dawg Patch Bandits paused for a photo at their kickoff event Friday at Sagg Main Beach.
By Christine Sampson

What started last year as a Sag Harbor athlete’s cross-country bike trip in memory of friends who died from opioid overdoses has grown into a full-fledged nonprofit that promotes physical fitness as a way to reach natural highs instead of using drugs.Drew Harvey and Nico McMahon, friends from Sag Harbor who are both certified ocean lifeguards, and several of their buddies are behind the Dawg Patch Bandits, which they formed in honor of a friend they lost to opioids. They marked the launch of the organization on Friday at Sagg Main Beach — on what would have been their friend’s 32nd birthday — by giving out T-shirts and stickers, offering free fitness coaching, and talking about the realities of opioid addiction.“What we’re trying to do is these active challenges, where they take non-traditional modes of travel of getting from point A to point B, and doing them in an active and fit way,” Mr. Harvey said Friday. The goal is to inspire people to be more active in their everyday lives. “We’re using endorphin-activating activities to combat opioid abuse. That’s our main mission.”Mr. Harvey and Mr. McMahon said the Dawg Patch Bandits are also planning community fitness and recreation events later this summer not only in memory of their friend, who was an elite athlete, but also to raise money for educational campaigns and to support avenues for addiction treatment.Mr. Harvey and a friend biked across the United States last May after graduating from the University of San Diego, raising money and attracting a social media following as the Dawg Patch Bandits. They split the proceeds between creating a “safe space” at their college campus and creating an outdoor workout area at Pierson Middle and High School, which they said they expect to be unveiled in the next couple of weeks. A nonprofit organization was a logical next step, they said, and they already had the perfect name.“We’re also trying to bring light to it,” said Mr. McMahon, who is an emergency medical technician in Sag Harbor and is studying to be a physician’s assistant. “This is an addiction. It’s not something that’s necessarily their choice — it’s a disease. Unfortunately, pharmaceutical companies push opioids. There’s a shift now, there’s a trend to look for non-opioid routes of treating pain, but all it takes is one dose to get that feeling. If you don’t have the support group or the awareness that this is a problem, people can get addicted so easily, and we’re trying to let people know that.”In Southampton Town, according to Drew Scott of the Southampton Town Opioid Addiction and Recovery Committee, there were six fatal overdoses in 2018, down from 19 in 2017.In East Hampton Town, according to statistics released in March by the East Hampton Town Police Department, officers and other first responders assisted with 10 drug overdoses in 2018, the same as in 2017. Officers used Narcan in 2018 to save three people from what would have otherwise been fatal overdoses. Three people died from overdoses in 2018 in East Hampton Town, police said.“We’re trying to get people moving, get people together, and be here for each other,” Mr. McMahon said. “We don’t have to see people go down these holes.”