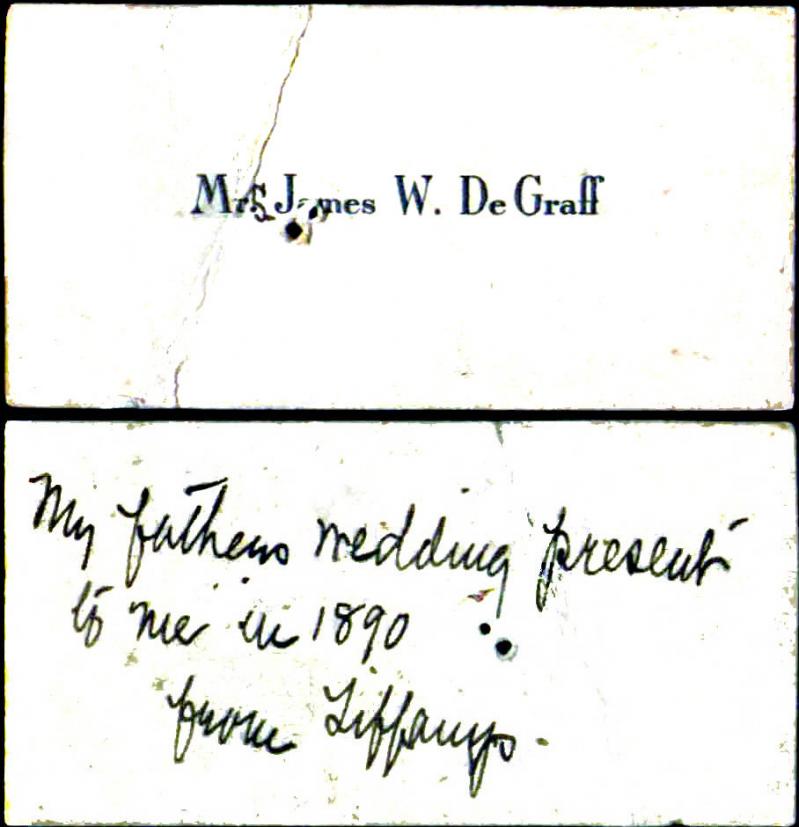 If you have ever waited in line to check out books, got a cup of coffee, or relaxed with a good book in our reading room, chances are you’ve heard the East Hampton Library’s large grandfather clock near the main desk solemnly toll the hour throughout the course of the day. The clock itself, with its imposing presence and beautiful bell-like tones, takes us back to another time, but not much seems to have been known about it until just a few years ago.After not having chimed for some time, the grandfather clock was cleaned and repaired in 2016 by Stan Bitterman, a clock expert and a summer resident here. In examining the clock, he discovered a calling card (seen here) about three inches in length. The name Mr. James W. DeGraff was printed across the front in an elegant typeface.The card is damaged and certainly shows its age, with a large crease and multiple pinholes. If you look closely, however, you’ll notice a small “s” attached to “Mr.,” with a note scrawled on the reverse side. “My fathers wedding present to me in 1890 — from Tiffanys,” it reads.After doing some sleuthing here in the Long Island Collection, it appears Mrs. James W. DeGraff (alternately spelled de Graff and De Graff) was Carrie Milliken DeGraff (1867-1951) of Brooklyn, who married James Wilde DeGraff (1862-1956) of Chicago on Jan. 22, 1890. The clock was given by her father, Samuel Milliken, who may have bought it from Tiffany & Co. at 15 Union Square West in Manhattan (the store was there from 1870 to 1906).James DeGraff founded and was president of DeGraff & Palmer, a “wholesale notions house” in New York, according to his obituary. The family lived in Plainfield, N.J., but when DeGraff retired in the 1920s, they bought a summer house in East Hampton. Known as Cherridune, it still stands today at the corner of Cross and Apaquogue Roads. Upon DeGraff’s death in 1956, his daughter, Eleanor DeGraff Carr, gave the Tiffany clock to the East Hampton Library in his memory. It’s amusing to think how much Carrie DeGraff wanted to preserve the memory of her grandfather clock. I’m sure she never imagined how far it would travel.Gina Piastuck is the department head of the East Hampton Library’s Long Island Collection.