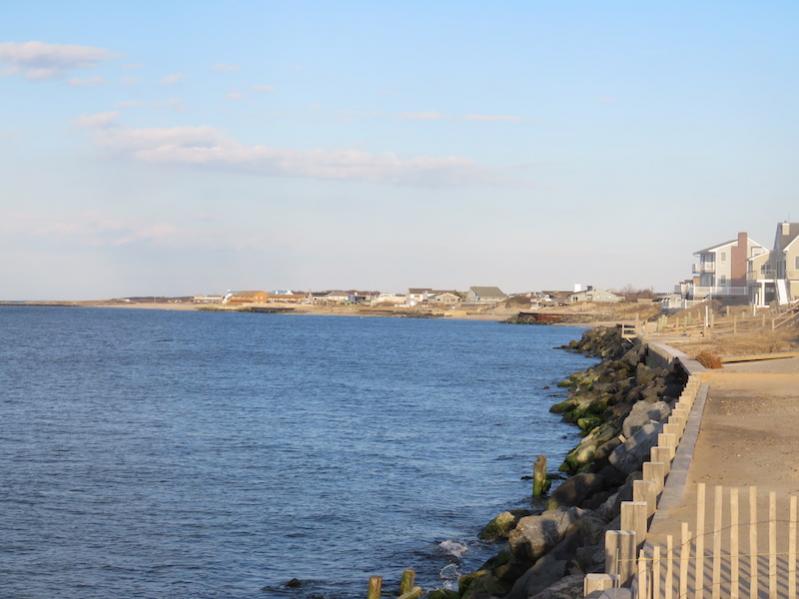 A federal court decision last week means the town will not be required to undertake a court-imposed beach restoration project that property owners west of the Montauk inlet jetties had demanded.
Jane Bimson

A 2018 jury trial and verdict concluding that the Town of East Hampton was responsible for erosion west of the jetties at Montauk Harbor was overturned on Friday, when a judge granted the town's motion to dismiss the lawsuit. The dismissal overrules the $356,000 in damages awarded to seven property owners, who were among 11 plaintiffs in a lawsuit originally filed in 2010.

Judge Joanna Seybert of the United States District Court for the Eastern District of New York granted the town's motion to dismiss the lawsuit, Cangemi et al. v. Town of East Hampton, in which property owners along Captain Kidd's Path and Soundview Drive in Montauk's Culloden Shores neighborhood claimed that the town was responsible for the erosion to their properties that was exacerbated by the jetties on either side of the inlet to Lake Montauk.

Judge Seybert's decision also eliminates the possibility that she would consider requiring the town to undertake a court-imposed beach restoration project demanded by plaintiffs, according to a statement issued by the town on Tuesday.

Carl Fisher, the entrepreneur who aimed to develop Montauk as a "Miami Beach of the North," built the jetties in 1926. They became a Federal navigation project under the 1945 Rivers and Harbors Act. Although the town took ownership of the jetties to facilitate the federal takeover, according to the statement on Tuesday, Judge Seybert found that the town had no control over them, and that the federal Army Corps of Engineers "considered the jetties and the channel to be a federal responsibility with federal responses required to solve the erosion problems."

"The pace of the federal studies and response (or lack thereof) was not something the town could control" and thus "it is not responsible for fixing a problem it did not cause, approve, or exacerbate."
- United States District Court Judge Joanna Seybert

Judge Seybert also found that "the pace of the federal studies and response (or lack thereof) was not something the town could control" and thus "it is not responsible for fixing a problem it did not cause, approve, or exacerbate."

The 11 plaintiffs sought more than $25 million for damages to their properties and to compel the aforementioned beach restoration project, which it was estimated would have cost $20 million.

Supervisor Peter Van Scoyoc was among those giving testimony at the four-week trial in June. The jury cleared the town of liability for public nuisance, but found it responsible for private nuisance and trespass caused by erosion. The town moved for judgment in its favor following the trial.

Mr. Van Scoyoc announced the decision at the town's board's meeting on Tuesday, calling it a "big victory for local taxpayers" who "won't have to foot the bill for rebuilding private property." Most of the properties in the "highly erosive area," he noted, had been improved with bulkheads long before the current owners purchased them.

The jetties, he said, help to protect "one of the most important ports in New York," and the state's most productive fishing port. The inlet is also home to a United States Coast Guard station, located on Star Island. "I'm very pleased with this being overturned," he said.

The Carle Place law firm Sokoloff Stern L.L.C. represented the town in its motion to dismiss. Last week, the town board voted to retain the same firm to advise on litigation involving Marc Rowan, the billionaire investor who bought Duryea's Lobster Deck and associated properties in Montauk in 2014. A settlement reached with Mr. Rowan, who filed three lawsuits against the town last year, has come under sustained criticism from residents of Montauk as well as others in the town.