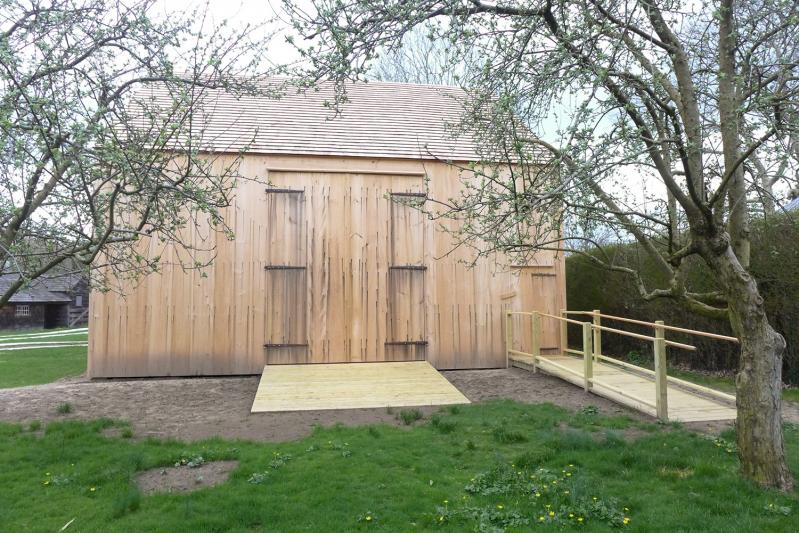 A restored barn newly added to the Mulford Farm on James Lane will be dedicated in memory of the late Ben and Bonnie Krupinski during an afternoon open house on Saturday.
By Mark Segal

Those who wondered about the barn that recently appeared in a new coat of shingles at the Mulford Farm — the Hedges-Edwards barn — can have their questions answered on Saturday afternoon from 2 to 4 at an East Hampton Historical Society party and dedication ceremony.

The 1770 barn, which the historical society acquired some years ago, has been named for both the Hedges family, who built it, and E. J. Edwards, the East Hampton man who preserved it in the first half of the 20th century and moved it to family property on Edwards Lane.

It was dismantled at that location and restored piece by piece over the past two years by the New Jersey Barn Company before being reassembled at its present site. “A lot of people have commented that it looks like a new barn,” said Maria Vann, the society’s executive director.

The work, which included installing concrete piers and completing new roofing, siding, flooring, and massive double doors on the north and south walls, was donated by Ben Krupinski Builder, which Mr. Krupinski offered shortly before his death in a plane crash last June. Ray Harden and Stratton Schellinger, the company’s current co-owners, oversaw the effort.

The barn will be dedicated to Mr. Krupinski and his wife, Bonnie, who also died in the accident, at a 3 p.m. ceremony.

Among the afternoon’s activities are a woodcarving workshop led by Grain Surfboards New York and blacksmithing demonstrations by the East Hampton metal artist James DeMartis. “We picked those two activities because in order to build a barn you need woodworking and metalwork,” Ms. Vann said. “In fact, James is fabricating some historic hardware for us.”

Music will be provided by the Sunnyland Jazz Band, the Mulford Farmhouse will be open for tours throughout the afternoon, and Bostwick’s Catering will serve traditional refreshments.

“We just want people to wander the site and feel excited about the Mulford Farm,” Ms. Vann said. “We’ll have an opportunity to talk about the future activities we have planned for the barn, among them artistic programs for kids and educationally focused exhibits.”

The historical society’s annual meeting is also scheduled for Saturday, at Clinton Academy at 10 a.m. At 10:30, Helen A. Harrison, executive director of the Pollock-Krasner House and Study Center in Springs, will present “Bonac Bohemia: Artists of the Springs,” an illustrated history of the Springs art community from the 1940s to the present.