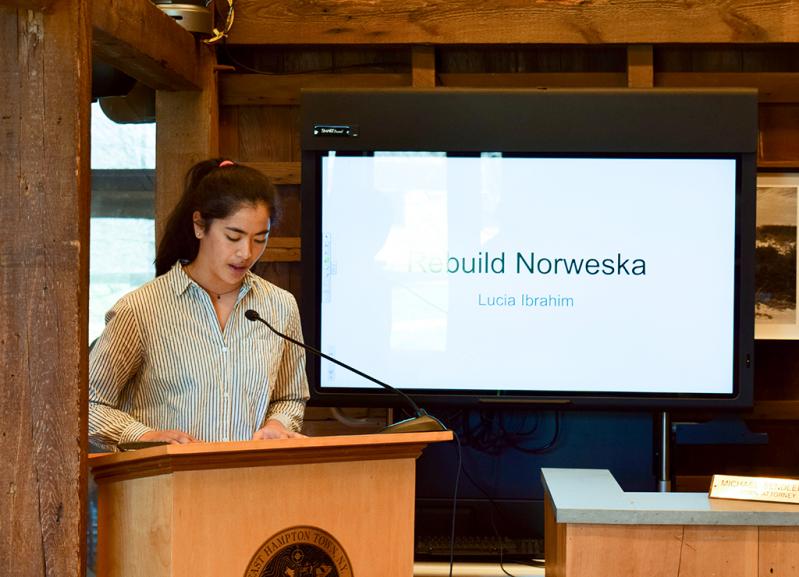 Representatives of Tesla Motors and a company with which it has partnered presented a refined proposal to install an array of electric vehicle charging stations in Montauk to the East Hampton Town Board on Tuesday. Edwin Xiao of Tesla Motors has appeared before the board previously: Last year, he proposed installation of the California electric vehicle manufacturer’s charging stations in the parking lot at Kirk Park Beach in Montauk. The board expressed interest but did not favor the proposed site, and asked that any stations installed be able to charge all electric vehicle models. On Tuesday, Mr. Xiao told the board that, having considered its previous comments, the company was proposing a new location, the parking lot on South Euclid Avenue, across the street and to the west of the hamlet’s post office. He displayed renderings depicting an array of eight Tesla charging stations and four more by Electrify America, a subsidiary of the Volkswagen Group of America that owns and manages a network of electric vehicle charging stations, in the proposed location. “We spent lots of time and investment toward trying to make this a viable plan for the entire town,” he told the board. “We think this could bring great visibility to the town, and also to future and current EV drivers.” With Mr. Xiao was Richard Gershman, a regional project development manager at Electrify America, which was established in 2017 as part of a federal consent decree that settled claims by the federal Environmental Protection Agency and Federal Trade Commission against Volkswagen AG stemming from the German car manufacturer’s emissions scandal. One requirement of the settlement was Volkswagen’s $2 billion investment in establishing a zero-emission-vehicle infrastructure and brand-neutral public awareness campaign for such vehicles. Tesla and Electrify America stations, the board was told, would be grouped adjacent to each other. The network Electrify America is installing across the country, Mr. Gershman said, serves all electric vehicles, and that would hold true in Montauk. The parking lot would see no net loss in spaces, and the area would be screened off with native trees. Installation would take four to six weeks, Mr. Xiao said. He and Mr.Gersh­man explained that a smartphone app would alert motorists when their cars’ batteries have been charged, so that they would vacate the space to allow another electric vehicle to be charged. The stations to be installed could charge a vehicle in as little as 15 minutes, Supervisor Peter Van Scoyoc said. Parking restrictions would have to be modified for the spaces, board members agreed.The town would bear no cost for the charging stations or their installation, Mr. Xiao said. Each charger would otherwise cost the town approximately $50,000, he said, and he assessed an implied total value of the entire installation at around $600,000. In 2014, the town adopted a goal of meeting 100 percent of its annual communitywide electricity consumption with renewable sources by 2020, and to meet the equivalent of 100 percent of annual communitywide energy consumption in all sectors with renewable sources by 2030. As part of that effort, the town’s fleet of electric vehicles has grown, with the addition earlier this year of four Nissan Leaf models. Earlier in the meeting, Aubrey W. Peterson, Emma Silvera, and Kailey DeMai, members of East Hampton High School’s Environmental Awareness Club, urged the board to support the proposal. More and more manufacturers are offering electric vehicles, Ms. Silvera said, and charging stations would allow the town “to not only encourage use of electric vehicles, which would mean less greenhouse gas emissions, but also greatly improve the environment of our beautiful town.”Further, she said, “electric charging stations will help the East Hampton Town Board meet its goal of using all renewable resources by 2030, which is only 11 years away.”Ms. DeMai expressed “support for the idea that we need to do everything we can to reduce our carbon footprint here in the Town of East Hampton and in all the other towns. . . . We are very proud of the work that the town is doing, and I hope you can hear loud and clear what we kids are saying.” Despite lingering reservations about lighting and the charging stations’ aesthetic characteristics, board members signaled their support for the proposal, though Councilwoman Sylvia Overby plans to first solicit opinion on the revamped proposal from the Montauk Citizens Advisory Committee. The board will then have another discussion, with comment from the Planning Department.The town, Mr. Van Scoyoc said, has worked hard to make a transition to renewable energy. “It’s critical when you make a transition . . . that you have adequate infrastructure to help promote it, and also to meet the needs as they grow,” he said. This proposal represents “an excellent way that we can expand our capacity, and at no cost to taxpayers.” “We look at this as a project in unison with you,” Mr. Xiao said, “to see what’s the best strategy for EV charging in the township.”