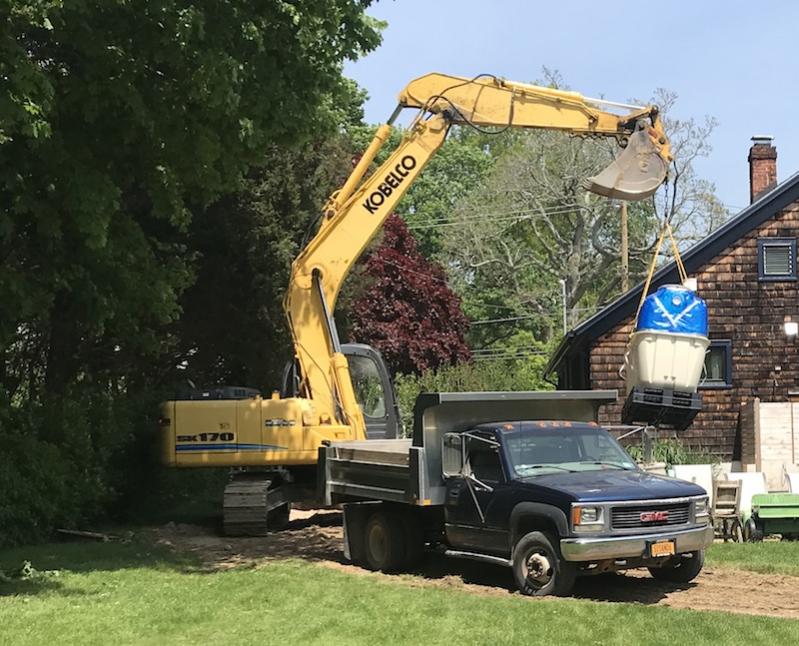 The county attorney's office received a ruling from an outside law firm that said 1099s should go only to installers and designers of the new high-tech septic systems, and not to homeowners.
By Johnette Howard

The Suffolk County executive’s office has formally asked Suffolk County Comptroller John M. Kennedy Jr. to rescind the 1099 tax forms his office sent to homeowners who took advantage of a county grant program that helps pay for the installation of high tech, more environmentally friendly septic systems, at least until an Internal Revenue Service ruling can be obtained.The county executive office decried Mr. Kennedy’s decision, characterizing it as a “water tax” on well-meaning residents who participated in a program to protect the county’s water table.“It makes no sense to threaten homeowners with tax liability unless and until the I.R.S. has indicated that issuing 1099s to homeowners is appropriate,” Deputy County Executive Peter Scully wrote in a formal letter to Mr. Kennedy.Homeowners are upset because they could be facing thousands of dollars in federal taxes they didn’t expect. The grant applicants were originally told the contractors who did the site designs and installations of the new systems would be required to count the payments as taxable income because the county paid the grant money directly to them. Differences between the county executive and comptroller’s offices have been brewing almost since the program began in 2017.Mr. Kennedy, speaking in a telephone interview last week, said he went to the county executive in April and August of last year with his concerns that the I.R.S. would not agree with the way the program was structured.But even before that, the county comptroller’s differing stances on issuing 1099s for the program created confusion.Some residents and contractors reported receiving 1099s from Mr. Kennedy’s office in 2018 for the same jobs, which tax professionals insist should not happen.Still other contractors reported receiving one 1099 that held them liable for the grant payment — and then a corrected 1099 a year later showing, to their surprise, that their taxable income from the county had been reduced to zero. This year, it was the homeowners’ turn to be surprised. On Tuesday, a coalition of residents, contractors and environmental groups held a press conference in Patchogue demanding, among other things, that Mr. Kennedy fix his “blunder” and rescind the homeowners’ 1099s before the April 15 deadline to file their state and federal tax returns.Mr. Kennedy agrees he has not conformed to the tax ruling that Mr. Bellone’s office and county legislators received from the county attorney’s office and its outside law firm, Harris Beach. That ruling, which decided how the county grants were designed, said the 1099s should go only to the installers and designers. (The towns of East Hampton, Southampton, and Shelter Island all have septic system rebate programs to supplement the county program, and they operate on the same tax principle: “The 1099 goes directly to whomever gets the check,” Len March ese, the Southampton Town comptroller, said last week.) But Mr. Kennedy — who acknowledges his job is to act as the county’s chief fiscal officer, not make policy — said he acted differently because he found Harris Beach’s recommendation, as well as some of the case law cited therein, “questionable.” He says he told Mr. Bellone’s office that.“Their opinion was, in my opinion, very constrained, tangential, and it really didn’t go to the heart of what the program is at all,” Mr. Kennedy said. “Citizens should not have to face this uncertainty. The I.R.S. could come back later and say, ‘Hey, County. . . .’ ”Tuesday, Mr. Kennedy again blamed Mr. Bellone for the confusion.“In April of 2018, my office wrote to the Bellone administration, raising serious concerns regarding the legitimacy of their legal opinion,” Mr. Kennedy said in a statement. “Rather than seeking the [I.R.S.] guidance that we asked for almost a year ago, they did nothing. I now will do yet another task that is clearly the responsibility of County Executive Bellone.”Mr. Kennedy, a Republican, announced last month that he hopes to oppose Mr. Bellone in the next county executive race.Mr. Scully, in his letter to the comptroller, wrote that he feared Mr. Kennedy’s actions could have potential implications for the $75 million New York State Septic System Replacement Program grants. Suffolk County received $10.1 million of that state money last year. So far about 300 active grants have been awarded to county residents, and another 70 systems have been installed. Reducing wastewater nitrogen and other chemicals in the water supply helps fight algae blooms and other problems that taint water quality.“We want to get more systems in the ground,” Mr. Bellone has said.