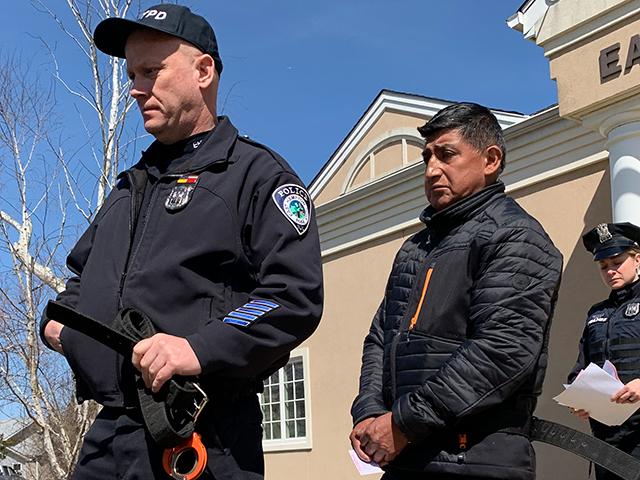 East Hampton Town police arrested two men last week in separate cases of sex abuse.On Saturday, a 23-year-old Springs man was accused of raping two teenage girls in a house in Springs. On April 3, a 56-year-old man was charged with sexually abusing a child, also in Springs.Following an investigation, the first man, Bryan C. Ordonez-Albarracin, was charged with three felonies: first-degree rape, second-degree rape, first-degree sexual abuse, and a misdemeanor, endangering the welfare of a child.In a statement, detectives said they learned of the abuse during an interview with the teenagers. Police did not release their ages or give information about who first reported the alleged crime. Following the interview, Mr. Ordonez-Albarracin was questioned and then arrested on Saturday. Police have declined to release further information.Mr. Ordonez-Albarracin was arraigned in East Hampton Town Justice Court on Sunday. Justice Steven Tekulsky ordered him held on $80,000 cash or $160,000 bond. Days earlier, Juan M. Bacuilima, who used to live in Springs but moved to Sag Harbor a week ago, was charged with sexual abuse in the first degree and endangering the welfare of a child. He faces seven years in jail. Police said school officials contacted them in January when the child disclosed the abuse to a teacher after watching an educational video on when to report touching by an adult. Police did not disclose a relationship between Mr. Bacuilima and the child.At his arraignment in Justice Court last Thursday morning, Rudy Migliore, a Suffolk County assistant district attorney, said that Mr. Bacuilima had inappropriately touched a 10-year-old girl. Matt D’Amato, a Legal Aid Society attorney representing Mr. Bacuilima, tried to stop Mr. Migliore from providing details of the case in open court by waiving the public reading.“I’m entitled to speak to the strength of the people’s case,” Mr. Migliore protested. Justice Lisa R. Rana let him continue.Mr. Migliore said that Mr. Bacuilima had admitted to police that he had touched the girl for “one or two minutes” and that he had asked her if she liked it. According to his confession, as read by Mr. Migliore, “She said, ‘No, don’t touch that.’ I’m very embarrassed for what I did.” Mr. D’Amato disputed the admission, noting that his client speaks Spanish and did not see a certificate of interpretation included with the alleged confession.Mr. Migliore asked for $75,000 cash bail or $150,000 bond, arguing that Mr. Bacuilima has had several addresses over the years and “tenuous employment.” Mr. Bacuilima said through an interpreter and his attorney that he had lived in East Hampton for 20 years and worked at a garden center for 15 years. His most recent job, held for one week before his arrest, was with an insulation company. He had a hard time telling the interpreter its name.His lawyer said the prosecutor’s bail request was not only unreasonable but unnecessary. He said Mr. Bacuilima had tried to turn himself in on April 3 at 9 a.m., but left for lunch and returned later, when he was arrested. He has no prior criminal record and no longer lives at the same address as the child, Mr. D’Amato said. He asked for $5,000 bail.Justice Rana set bail at $50,000, which was not immediately posted.Both men were remanded to the county jail in Riverhead. A temporary order of protection was issued for the alleged victims in the cases against Mr. Bacuilima and Mr. Ordonez-Albarracin. Mr. Bacuilima was due back in court on Tuesday, but his attorney waived his right to be released if prosecutors had not indicted him by then. He is set to appear in court today. Mr. Ordonez-Albarracin is also expected in court today. Anyone with information in either case has been asked to call East Hampton Town police at 631-537-7575. All calls will be kept confidential.