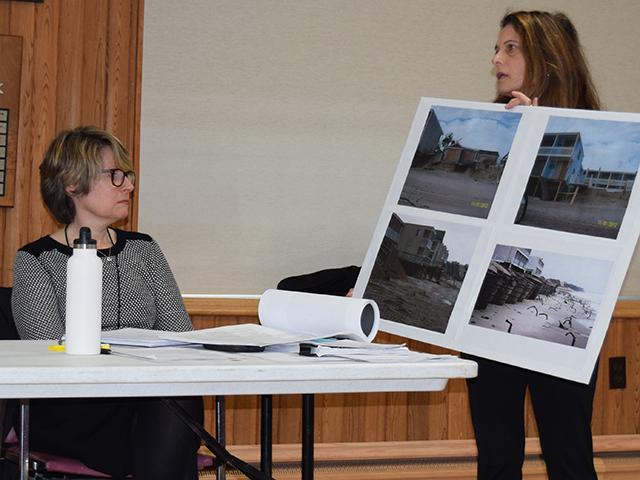 Lisa Liquori, one of the consultants involved in developing an ambitious 50-year strategy focused on retreat from the coast in downtown Montauk, spelled out the stakes facing officials and property owners during a town board meeting on Tuesday.
By Christopher Walsh

The ongoing Montauk hamlet study was the subject of more discussion when the East Hampton Town Board met at the hamlet’s firehouse on Tuesday with the board and the consultant who has updated it as to the study’s recommendations acknowledging that the long-term plan to relocate many oceanfront structures in the downtown area is widely unpopular, particularly among the owners of those properties, and that some of the recommendations should simply be discarded. Behind the drawn blinds in the second-floor meeting room at the firehouse, however, the early-spring chill outside did not mask the looming threat of sea level rise or devastating weather that climate scientists say is increasingly likely, a threat illustrated by the photos that Lisa Liquori, the consultant, held before the board. Mounted on poster board, a series of four photos depicted oceanfront motels in the wake of Superstorm Sandy in 2012, a dramatic reminder that those businesses, and by extension a major component of the town’s economy, are virtually defenseless in the face of such storms. “I think this issue about coastal adaptation is going to take some time to work through,” Supervisor Peter Van Scoyoc said. “My conversations with business owners, environmentalists, residents — I know what those issues are. It’s going to take a lot of work . . . to go through a process that . . . the public will ultimately support. We need to get started.”How to get there remains a vexing question. “I think the goal of the study is to enunciate these broad-brush policies,” said Councilman Jeff Bragman. “And we’ve done a good job to make the basis of those decisions. . . . The difficulty is getting from general to specific.” Board members agreed that discarding some recommendations, such as traffic circles near the Long Island Rail Road station and the firehouse, and additional development around the railroad station, was advisable. A plan to connect that area to downtown for pedestrians and cyclists would likely remain.A recommendation to designate some downtown streets one-way, and a traffic circle at Second House Road near Montauk Highway, could be left in the final report, but with the proviso of further study and suggestions from the chief of police and the State Department of Transportation, Ms. Liquori said. With those refinements and subsequent adoption of the study, preparing a generic environmental impact statement, which would allow the town and the public to analyze the future effects of the hamlet study’s recommendations, would also be advisable, board members said. “A G.E.I.S. is a good suggestion for a way to get there from here,” Mr. Bragman said, one that would allow the board to plan without formally introducing a transfer-of-development-rights plan to relocate downtown businesses landward of the shoreline and to higher ground. “I feel we’re ready to conclude something about the hamlet plan,” he said, “but that doesn’t mean that we’re ready to announce a transfer-of-development-rights policy.” Ms. Liquori agreed that one way to finalize the report would be to “take out language that makes it seem more definitive,” including the words “managed retreat.” Councilman David Lys asked whether a more specific statement could be produced detailing how density and quantity of motel rooms might change, along with building parameters, all within Federal Emergency Management Agency requirements for flood-prone areas. Councilwoman Sylvia Overby agreed. “My concern is we lose this economic engine,” she said of the downtown businesses. The pictures Ms. Liquori displayed “are devastating,” she said, and a reminder of the destruction a powerful hurricane could deliver. “Our effort really is focused on sustaining the resources we have in Montauk,” Mr. Van Scoyoc said. That includes the beaches, “but we also have to figure out a way to make the transition without lowering the number of hotel units or diminishing the economy. We need to sustain that vital economy, and at the same time protect the beach. That is the difficult part.” The photos, he said, “bring back to the forefront of our minds what we were dealing with, with Sandy, how for months foundations were exposed.” And Sandy, he noted, “was not a significant storm” compared to what it could have been, “or even a series of large northeasters.” A beach replenishment project is to commence next week and conclude by May 15, the supervisor said, while the Fire Island to Montauk Point reformulation project is slated to add 450,000 cubic yards of sand in 2022. But “if we’re going to sustain the beach and beach economy, we need to plan ahead,” he said. “That’s where the conversation gets more difficult.”