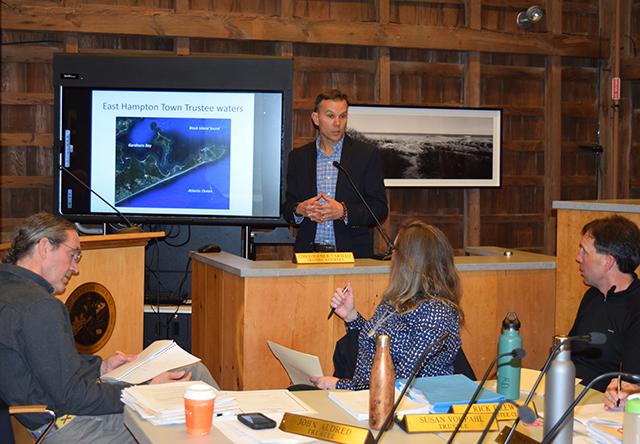 Most of East Hampton Town’s waters were of a high quality and generally supportive of fisheries throughout 2018, the town trustees were told on Monday, and some sites that the State Department of Environmental Conservation has closed to shellfishing are in fact worthy of being opened. But the head of Three Mile Harbor, and Georgica, Wainscott, and Hook Ponds are among the water bodies that continued to be compromised by harmful algal blooms or high levels of fecal coliform bacteria. These were among the findings presented by Christopher Gobler of Stony Brook University’s School of Marine and Atmospheric Sciences, who assesses water quality, harmful algal blooms, and pathogenic bacteria in multiple sites for the town trustees and property owners around Georgica Pond. Georgica Pond’s water quality improved last year, Dr. Gobler told the trustees, which he said was likely the result of the aquatic weed harvester that has removed macroalgae from the pond in recent summers, but dangerous blooms of cyanobacteria, or blue-green algae, occurred in Georgica Cove. Wainscott Pond, too, experienced a cyanobacteria bloom in July and August, following an extremely dense macroalgae bloom. Dr. Gobler told the trustees that Fort Pond in Montauk, which is not under trustee jurisdiction but which he began monitoring last year in collaboration with Concerned Citizens of Montauk, also experienced a cyanobacteria bloom in September and October last year. Salinity is generally very high in East Hampton’s marine waterways, almost that of ocean water, Dr. Gobler said. “This alone tells you most of these bodies are flushing very well, a very good sign,” he said, whereas runoff from land reduces salinity in other areas on Long Island. “During the day, making spot measurements, all water bodies measure up well, except Three Mile Harbor,” he said. While bacteria levels were generally lower than average in town waters, a high spike in fecal coliform bacteria at the head of Three Mile Harbor was measured in August, Dr. Gobler said. Likewise, very high levels of fecal coliform bacteria were measured on several occasions in Georgica and Wainscott Ponds, he said. “We agreed it would make sense to bring in a new tool,” he told the trustees. “It’s very difficult to take managerial action to improve conditions if you don’t know where fecal bacteria is coming from,” and waste from different types of animals would dictate different solutions. Microbial source tracking of fecal bacteria found that animals, and not humans, were usually responsible for such contamination in Three Mile Harbor and Georgica Pond, with birds, and dogs and other small mammals, being the dominant sources. Dogs and small mammals were mostly responsible for fecal coliform bacteria in Georgica Pond, Dr. Gobler said, but tracking demonstrated a stronger influence of birds through the summer season, picking up in the fall. That, he said, suggests more road runoff in the summer, and a migration of Canada geese in the fall. In general, he said, his lab’s analyses match those of the D.E.C., but sites in Hog Creek, Hand’s Creek, and Northwest Creek appear cleaner than the D.E.C.’s determinations. According to his data, the northern half of Northwest Creek, which is seasonally uncertified, or closed to shellfishing, could be open, he said. Likewise, at a seasonally opened area in Hog Creek, “we’re seeing the water as clean,” he said.Over time, the D.E.C. does change its declarations with regard to shellfishing. “Now is an opportunity to, perhaps going forward, do more intense sampling, open a conversation,” if the trustees are interested in opening those waterways to shellfishing. In the Three Mile Harbor watershed, the density of houses is likely promoting water quality impairment, Dr. Gobler said, as nitrogen-loading rates correspond to algal blooms. But because of rapid groundwater travel time, actions taken now could show results in just two years. As Suffolk County has approved multiple alternative septic systems that remove most nitrogen, replacement of traditional septic systems would markedly improve water quality.In Wainscott Pond, cyanobacteria are promoted by nitrogen and phosphorus, the latter coming primarily from sediments, Dr. Gobler said. A series of remediation actions are being considered, including removing muds and installing a permeable reactive barrier to intercept the flow of nitrogen.