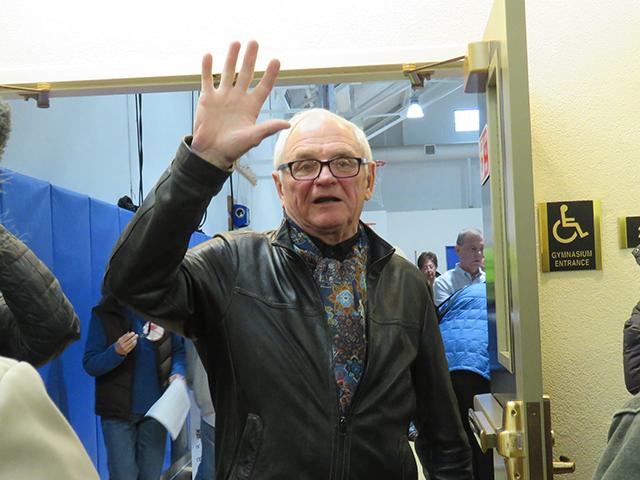 Tom Bogdan organized a group some 100 strong that showed up at PSEG Long Island’s informational meeting in Montauk on Tuesday to voice opposition to a new substation on Flamingo Avenue.

At least 200 people turned out on Tuesday for a daylong presentation by PSEG Long Island on possible locations for a new substation to serve Montauk’s growing electrical demand. PSEG has narrowed its preferred locations for the Montauk installation to an existing site on Industrial Road and another nearby between Navy Road and Industrial Road, although it had also proposed additional sites on parkland and a controversial one on Flamingo Avenue.According to the utility, the current substation on a low, man-made site jutting into Fort Pond is at capacity and cannot support any additional load. Without a significant upgrade PSEG would have to turn to what it terms “emergency generation” by next year. In general, the South Fork’s demand for power is projected to grow at 2.4 percent a year. Tuesday’s all-day open house drew a steady crowd, peaking around 6 p.m. when about 100 people organized by Tom Bogdan, a Montauk resident and activist, marched into the Montauk Playhouse gym, where PSEG had set up its presentation. Many among the residents’ group sported buttons with a crossed-out flamingo image pinned to their jackets, indicating their opposition to the Flamingo Avenue site.PSEG had a large number of representatives there to answer questions. There was also food, including sandwiches, and an estimated 20 pizzas.For Montauk’s approximately 6,600 customers, alternatives, including battery storage and load reduction, have reached their limits, officials said. Hardening the Industrial Road site was the simplest option, PSEG said. Though any new equipment there would have to be elevated considerably to meet flood requirements, only limited regulatory approvals would be needed because the area is already put to the same purpose.Costs there would be the lowest, as well. The rebuilt substation would be in close proximity to where the electricity is needed, PSEG said.A dozen other potential sites originally suggested for the new substation were deemed unsuitable, PSEG has said. These included spots near the now-capped Montauk landfill, and others too close to wetlands, too small, or privately owned. Siting the facility on high ground at Edward V. Ecker County Park on Fort Pond Bay, as town officials had suggested, was possible, but not ideal, it said. Transmission lines would have to be cut through the park and cable crossings by power lines at Navy Road would require steel poles up to 80 feet tall. Also adding to the cost would be buried “feeder” cables reaching to Industrial Road.At an East Hampton Town Board meeting this week, however, Supervisor Peter Van Scoyoc still held out the possibility of the park site. Getting permission to use a small portion of the park would not be as great a challenge as PSEG believed, he said.Similar problems with parkland and distribution remained at the landfill site just south of the Long Island Rail Road tracks, PSEG said.A parcel already used for electrical battery storage off Second House Road between Industrial Road and the train tracks was a possibility, but had a small degree of community opposition, PSEG said. The Flamingo Avenue site would be on three residentially zoned parcels immediately to the north of the Montauk Playhouse and the hamlet’s main firehouse. It would border several undeveloped lots and a Suffolk County Water Authority tower and pump station. According to material presented at Tuesday’s open house, the Flamingo Avenue site would present several problems, including the parcels’ topography and strong community opposition.Public comment on the various options will be accepted until the end of April at psegliny.com/reliability. A link to a Google form asking questions about the five specific proposed locations can be found from the PSEG website’s “Community” page under “Reliability Projects.”After collecting comments and form data PSEG plans to announce its decision about how to proceed in the coming weeks.With Reporting by Jane Bimson