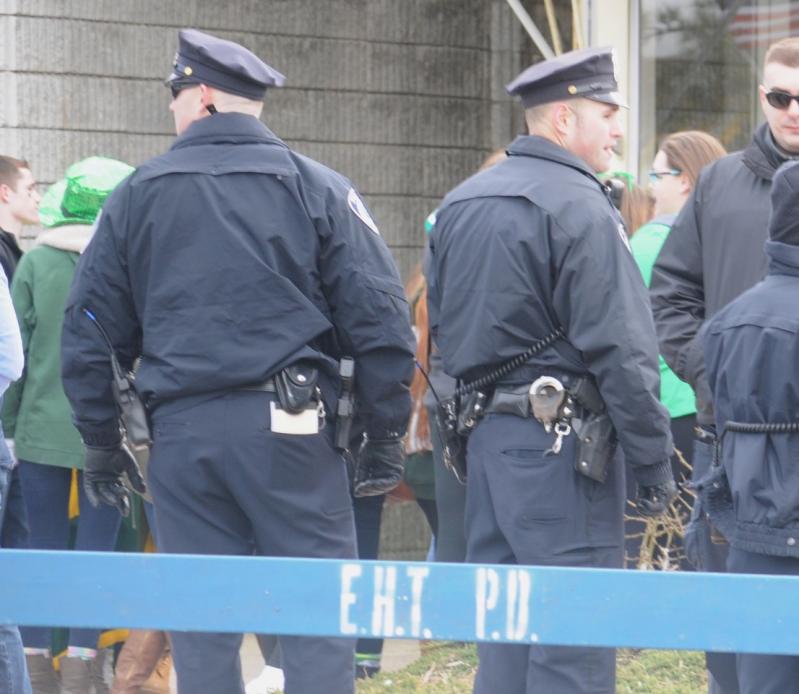 The Montauk Friends of Erin St. Patrick's Day Parade on Sunday saw beautiful weather and, according to East Hampton Town Police Chief Michael Sarlo, a calm crowd."The parade was very orderly, and the crowds were quite compliant this year," Chief Sarlo said in an email on Tuesday. "It was definitely a family-friendly day in Montauk, with the best weather we have had in years, and a nice-size crowd."Joe Bloecker, a representative of the Montauk Friends of Erin, estimated that 20,000 to 25,000 people attended.Town police made four arrests on Sunday, one just before the parade started that resulted in a misdemeanor drug possession charge for an 18-year-old from West Islip, and one on a misdemeanor assault charge following a fight at the Long Island Rail Road station as a crowd was boarding a westbound train. Police made two drunken-driving arrests in the late afternoon and early evening.About 100 officers from 12 departments, not including the contingent from the Metropolitan Transportation Authority police, helped patrol the parade, Chief Sarlo said. "There were no fights or disorderly conduct issues during the parade, and we only issued a handful of town ordinance summons on the day," he said.The teen, whose name was not released because he is eligible for youthful offender status, allegedly had a backpack with eight glass cartridges containing a brown liquid substance that later tested positive for marijuana and four green-and-yellow gummy edibles. He was arrested on Fort Pond Road around 11:10 a.m. and released on $100 bail the same day.Chief Sarlo reported that approximately 1,500 riders had arrived on the L.I.R.R. for the festivities. Two extra eastbound trains were run ahead of the parade's start, and one extra westbound train afterward.As riders boarded for points west, the fight broke out around 5 p.m. Tristan A. Johnson-Weigle, 21, of Shirley allegedly punched another man in the face and slammed his head against the wall, causing a fractured nose and laceration to the back of the man's head, which required medical attention. Mr. Johnson-Weigle was charged with third-degree assault, a misdemeanor, and held overnight for arraignment. Justice Lisa R. Rana released him on $250 bail.There were no reported problems on the eastbound trains before the parade, Chief Sarlo said.The two charged with misdemeanor D.W.I. were Kevin P. Sabo, 28, of Westhampton Beach and Miguel A. Martinez, 21, of Mastic Beach.Mr. Sabo was involved in an accident on South Essex Street near Montauk Highway around 4:55 p.m. Justice Rana released him on his own recognizance following arraignment on Monday. Mr. Martinez was arrested after police saw him make an unsafe turn in a 2007 Hyundai headed east on Montauk Highway near South Emery Street around 6 p.m. He appeared to be intoxicated when police pulled him over, they said. Police also said that his New York State driver's license was forged. In addition to misdemeanor D.W.I., he was charged with possession of a forged instrument in the second degree, a felony.Justice Rana arraigned him the next day and released him on $400 bail.