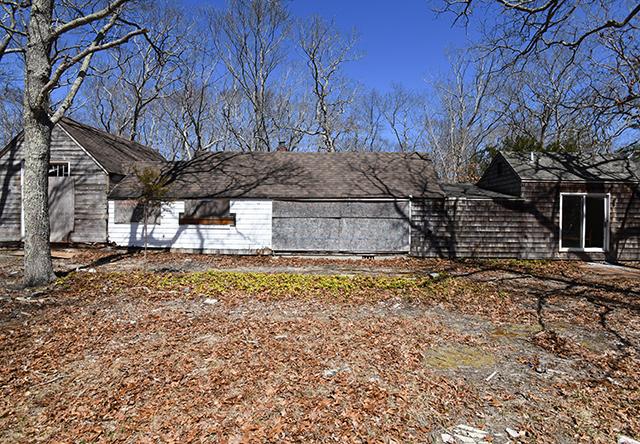 The Springs house and studios of the late artists James Brooks and Charlotte Park, the focus of a preservation effort for several years, should be demolished, the East Hampton Town property management committee told the town board this week.
By Jennifer Landes

Several years of effort to save the Springs house and studios of the artists James Brooks and Charlotte Park may be coming to naught, with a town committee this week recommending the studio be demolished and the fate of the other buildings also uncertain.A letter from the East Hampton Town property management committee this week to the town board recommended the studio, which Mr. Brooks designed and built in the early 1960s on Neck Path in Springs, be demolished. Town Supervisor Peter Van Scoyoc discussed the letter briefly at Tuesday’s meeting without resolution.According to the supervisor, “The studio building is in quite worse shape than when we purchased it six years ago. The intent was to save it, but it just seems like it is never going to be possible.” There was no further comment.Speaking by phone on Monday, Scott Wilson, the town director of land acquisition and management, said the buildings were on the verge of collapse. “They’re in bad shape. They’ve always been in bad shape.” Mr. Wilson said the next steps need to be determined.The artists were a married couple and a key part of the artists community  here in the 1940s and 1950s. Brooks died in 1992 and Park in 2010. The town bought the property for $1.1 million in March of 2013, initially as open space and a link to nearby trails. However, after the community discovered that the house and studios had remained unchanged since the artists’ deaths, residents formed the Brooks Park Heritage Project and lobbied for preserving the buildings as a community arts space. The buildings were designated a town historic landmark in July of 2014.The designation allowed the town’s Community Preservation Fund to apply money toward the site’s restoration, but not for its management. The project also spurred private tax-deductible donations through Peconic Historic Preservation, a nonprofit entity started by Robert Strada and Michelle Murphy Strada. John Mullen, a former architect and co-founder of the Container Store, contributed funds for a supporting beam to be placed in the Brooks studio to keep the building stable while efforts were made to restore all of the buildings. Mr. Strada and Peconic Historic Preservation became the licensee to manage the property for the town in April 2017. At the same time, the non-profit submitted a management plan that suggested that the buildings be used for exhibitions, readings, and performances, which would help pay for its management.“I’m a little taken aback,” Mr. Strada said about the possibility of demolition. “I haven’t been to a committee meeting for a while, and I didn’t know what was happening.” He said he does not believe the buildings are about to fall down. “I was there a couple of weeks ago and they have survived through the winter.”Mr. Van Scoyoc said on Monday that the estimates the town has received for the property’s restoration were about $1 million for mold remediation and “rebuilding a new structure where not much was retained from the original.” He said it was important to consider those costs relative to what would be left of the historical buildings. The town board would have to agree to demolition and put it out to bid. A decision would have to be made about what to do with the other buildings. Mr. Van Scoyoc said if it were determined that more or all of the buildings should be taken down, it would save money to have it done at the same time. Helen Harrison, the director of the Pollock-Krasner House and Study Center in Springs, said on Tuesday that it had offered to take a shed that functioned as the couple’s guest house, since Pollock and Krasner had stayed in it. The building could be placed off the center’s parking area as “something we can interpret as a place where Lee and Jackson stayed,” she said. When and if it were approved by the town, it could happen any time. “The shed is small. We could put it on a flatbed.”According to Mr. Van Scoyoc, moving the structures might require cutting down a number of trees. The cost of transporting the structures and the “gifting” of public property to a nonprofit are also issues.Ms. Harrison serves on the town’s property management committee and abstained from signing its letter. Given what is happening, she said, “I’m deeply grateful the town never got a hold of the Pollock-Krasner House.”This story has been modified from its original version to correct the year the property was purchased by the town and the occupation of John Mullen.