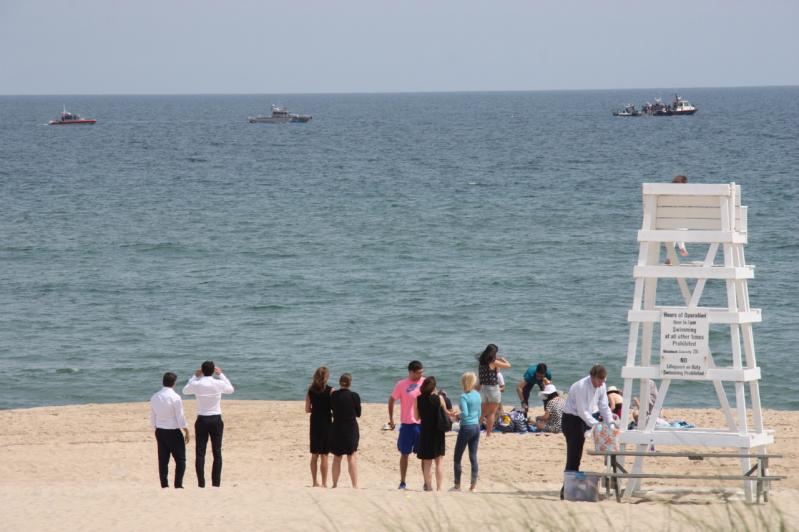 After funeral services for Ben and Bonnie Krupinski and their grandson, William Maerov, on June 8, 2018, friends of his visited the beach near where search efforts to find the 22-year-old's body were still underway.
By Taylor K. Vecsey

Partial remains of William Maerov, one of the three passengers who died along with the pilot in a small-plane crash off Amagansett in June, washed up on an ocean beach over the winter and were positively identified earlier this month, East Hampton Town police said on Friday. Mr. Maerov, 22, was aboard a Piper PA-31 Navajo that crashed into the ocean during a storm on the afternoon of June 2. His grandparents Bonnie and Ben Krupinski were in the plane with him. Jon Dollard, a 47-year-old pilot from Hampton Bays, was also killed. They were returning to East Hampton Airport after a quick trip to Newport, R.I., to pick up Mr. Maerov's sister, Charlotte Maerov, from school. She returned on a different aircraft that landed safely in East Hampton.  The bodies of the Krupinskis, both 70, were retrieved from the water soon after the accident. Police searched for the remaining victims for five days — as much as they could, given difficult sea conditions — before they located the majority of the wreckage 40 to 45 feet underwater about a mile off Atlantic Avenue Beach in Amagansett, along with Mr. Dollard's body. Police called off the search for Mr. Maerov 11 days after the accident. The family and police had asked that anything found on the beach that could possibly be related to the crash be reported to the police.Within a few days in January, police received reports of skeletal remains on the beach near Indian Wells Highway, not far from the crash site, according to Detective Sgt. Dan Toia. Two bones were sent to the Suffolk County medical examiner's office for DNA comparisons, he said.Police received word in early March that the medical examiner had made a positive identification, Detective Toia said. "Hopefully, this will give the family some closure in this tragedy," Chief Michael Sarlo said. "We send our thoughts and prayers to their entire family." Mr. Maerov's father, Lance Maerov, declined to comment on Friday. "He could connect with 80-year-olds, he could connect with 8-month-olds, and everyone in between," he had said at his son's funeral service in June, which was a service for his grandparents, as well. "Connecting with people was his gift."Mr. Maerov, a graduate of the St. Andrew's School in Middletown, Del., was in his third year at Georgetown University. Tad Roach, the headmaster of St. Andrew's, was among the speakers at the funeral. "Willie had a profound appreciation of the miracles around him," he said, and "expanded the definition of what it means to be a family."Charlotte Maerov said at the time that her brother "became a man with the biggest heart."Their mother, Laura Krupinski, died last month in Hampton Bays at the age of 53. The National Transportation Safety Board issued a preliminary report a month after the accident, but its investigation into the cause continues.