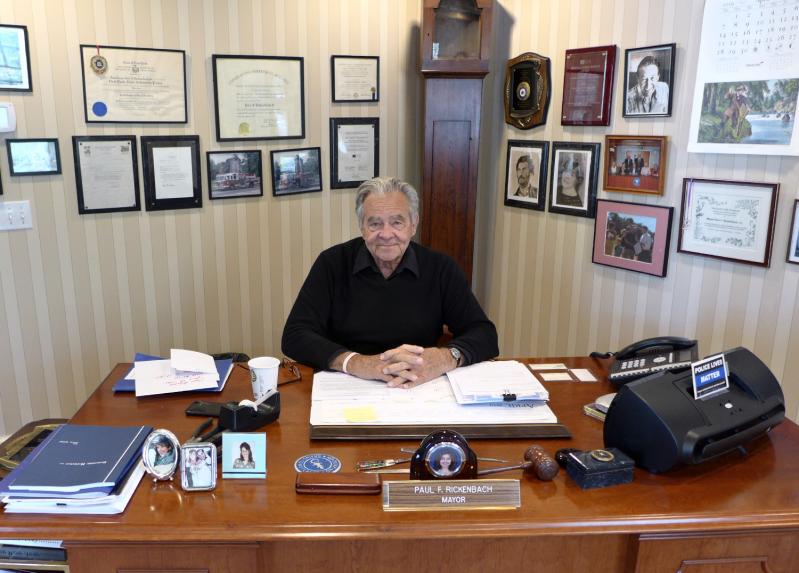 Mayor Paul F. Rickenbach Jr. in his office at Village Hall on Monday
By Jamie Bufalino

East Hampton Village Mayor Paul F. Rickenbach Jr., who has held the office since 1992, announced on Monday that he would not seek re-election in 2020. “I feel like I’ve accomplished so very much working with others that I can step back, and I just hope that some of the things the village has achieved over the years will be manifested as we move ahead,” Mr. Rickenbach said, adding that he was “burned out.” “There comes that time when you say, ‘Hey, I’ve made my contribution,’ and I want to leave on a high note,” he said. Mr. Rickenbach said developing the village’s first comprehensive plan‚ which lays out priorities such as preserving the village’s natural resources, historical character, and quality of life, was one of his proudest accomplishments as mayor. “I felt good about that because I saw things happening in the villages and towns around us, and I thought we needed to determine where we were headed,” he said. The plan was adopted in 2002. During his tenure, Mr. Rickenbach said he and the village board had been proactive about protecting the environment. “To some extent we’ve been at the forefront,” he said, citing bans on the use of plastic straws, single-use plastic shopping bags, and the intentional release of balloons.“A couple of years ago when I was on the Nature Trail, I saw these damn plastic bags, and I thought, ‘You know what? We all have a moral responsibility.’ That was kind of a trigger,” he said. “And, truthfully, I’m not a left-wing tree-hugger. I like to think I’m middle of the road.”He said he had sought to keep the village as removed as possible from the divisions that exist in national politics. When he first entered the mayor’s office, he said he told visitors, “When you walk into this room you’re going to leave whatever political label you have right there in the hall, I want to do the work of the people. I do not want to exclude, I want to be inclusive.” Mr. Rickenbach acknowledged that in some circles the village has a reputation for being “the village of no,” a reference to such code restrictions as a recently enacted special events law, which bans inns from holding outdoor events. “I think it’s the wrong label,” he said. “The people who use that label are just people who have been told that they can’t do what they would like to do.” The mayor said he was surprised that the 2020 mayoral campaign had begun already, and he had no immediate plans to endorse anyone. “I’m going to take a wait-and-see attitude, to see what he or she would be offering as a candidate.”Without citing names, he added, “I wonder about motivations of some who may seek the office of mayor, because it’s a humbling experience. It’s the highest honor, and you have to understand that it’s not all about you as the individual, you’re there to be representative of everyone.” After he leaves office, Mr. Rickenbach said he plans to spend more time with his four grandchildren and doing things that “put a smile on people’s faces.” He mentioned volunteering for Meals on Wheels as an example, and said, “There are other interests that I’d like to take advantage of while I’m still able to travel.”