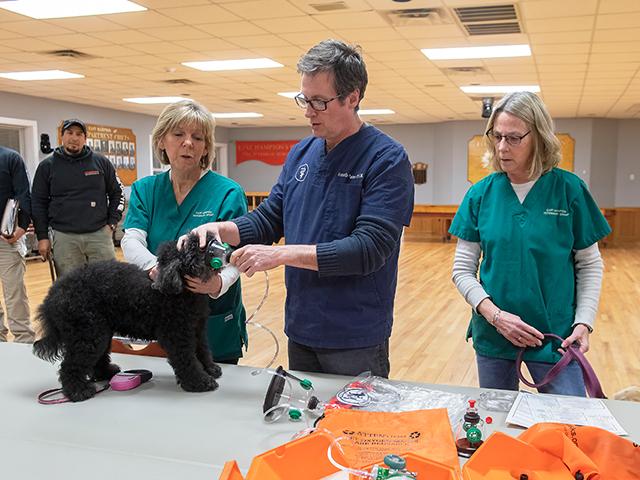 After donating pet oxygen mask kits to the East Hampton Fire Department last month, the East Hampton Veterinary Group gave firefighters a demonstration. From left were Patty Bock, Dr. Kenneth Palmer, a veterinarian, and Debbie Lester, the office manager who spearheaded a project to get the equipment to local agencies.
By Taylor K. Vecsey

When fires break out, fire departments and ambulance companies are well equipped for emergencies, but they are not always prepared for dealing with four-legged victims, although they try to do so.On the South Fork, several agencies recently received donations of pet oxygen-therapy kits to help. The East Hampton Veterinary Group, which is now part of the nationwide Veterinary Practice Partners, which owns several vet hospitals, has donated 14 kits so far to the East Hampton and Amagansett Fire Departments and the East Hampton Village Ambulance Association. Debbie Lester, the East Hampton group’s office manager, said she had heard about vet hospitals distributing Wag’N Pet Oxygen Mask Kits and thought it would serve this community well. “The animals just don’t get a fair shake. They really don’t,” she said, referring to emergencies. “These are members of the family now, animals. That’s why an effort is made and the right tools are important. If there’s a shadow of a chance of saving them we have to give it to them,” Ms. Lester said.Wag’N 02 Fur Life is an education and public safety company dedicated to helping save animals following fires across North America by providing pet oxygen masks to first responders. With 68 percent of households in this country having at least one pet, according to a national survey, there are at least 85 million pets that could be aided by lifesaving measures in the event of a house fire. Based in Canada, the company, which is a nonprofit, has provided more than 13,200 pet oxygen mask kits to more than 5,000 fire and emergency medical departments in North America. Pet oxygen masks come in three sizes and can be used on dogs, cats, rabbits, guinea pigs, and birds. The durable polycarbonate masks feature dual vents and a rubber mounted oxygen adapter enabling unrestricted inhalation and exhalation. Each mask can also be attached to an Ambu-Bag, a device used when a victim needs manual breathing assistance. In addition to three mask sizes and “pet oxygen masks on board” decals, the kits include air tubes, detailed instructions, a laminated card about cardiopulmonary resuscitation for cats and dogs, an incident report form, and an instructional DVD. It all comes in an orange carry bag for easy storage and mobility. The kits are “a much-needed and welcome addition to our equipment inventory,” said Gerry Turza Jr., the chief of the East Hampton Fire Department. Asked if he had been at scenes where pets sustained injuries in fires, he said, “I’ve been on several over the years and, yes, equipment like this would’ve been helpful.”   Ms. Lester knows all too well how the four-legged can often be the first casualty in a fire. Her office has a contract with the Town of East Hampton to take  pets there in an emergency. She recalled a cat brought in with smoke inhalation from an Amagansett house fire years ago and multiple animals arriving dead from various fires.Ms. Lester, along with others from the East Hampton practice, including Dr. Kenneth Palmer, has done presentations at the agencies to which they are donating kits. “They gave us a great presentation on emergency pet care, which was very informative,” Chief Turza said.The East Hampton practice bought the kits for $85 apiece and donated them to the emergency departments without charge, hoping to provide them to other agencies in the future. Donations are welcome to assist the effort, Chief Turza said.