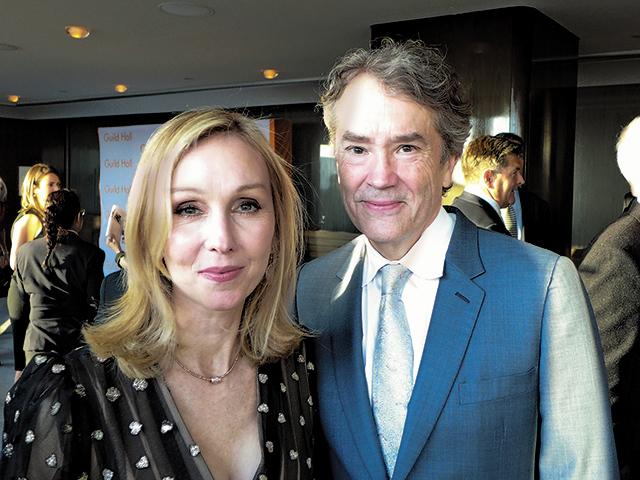 Andrea Grover, Guild Hall’s executive director, with Carter Burwell, an honoree at Guild Hall’s awards dinner Monday. One of his musical compositions was performed during the evening by the band Yo La Tengo.
By Mark Segal

Guild Hall knows how to throw a party, and it showed that Monday with the 34th Academy of the Arts Achievement Awards dinner high above Manhattan at the Rainbow Room. With Eric Fischl, the academy’s president, as host, and Adam Green an entertaining M.C., the evening honored Patti Askwith Kenner for leadership and philanthropy, Alice Aycock for visual arts, Bob Colacello for literary arts, and Carter Burwell for performing arts.The celebration really took off when the actress and singer Tovah Feldshuh introduced Ms. Kenner with a rousing Broadway medley that managed to acknowledge by name practically everybody in the room and still pay tribute to the honoree. Adam Weinberg, director of the Whitney Museum of American Art, introduced Ms. Aycock, the writer Linda Yablonsky did the same for Bob Colacello, and the film director Ethan Coen presented Mr. Burwell. Andrea Grover, Guild Hall’s executive director, provided some highlights from its history and previewed coming attractions such as exhibitions by Yung Jake, Christine Sciulli, and Tony Oursler, performances by Philip Glass, Sam Green and the Kronos Quartet, Buddy Guy, and Rufus Wainwright, and Alec Baldwin in a new play by Eugene Pack, to name just a few. Adam Green, who is the theater critic for Vogue magazine, had some fun with Ms. Feldshuh. “I first saw her when I was just a boy and she appeared in a music revue my mother directed at the American Place Theater. In one scene she stripped down to her underwear. That made a great impression on me and pretty much explains everything about who I am today.”He went on to mention Ms. Feldshuh’s other roles, one of which was Israeli Prime Minister Golda Meir. He praised her performance but noted that “from a physical resemblance standpoint that made as much sense as casting Lady Gaga as Mamie Eisenhower.” Amid the celebrations, there was a continuous recognition of what the evening represents. Mr. Fischl said, “It’s so exciting every year to see just how many incredible artists are connected directly to Guild Hall, and connected as well to the history and culture of the East End.”