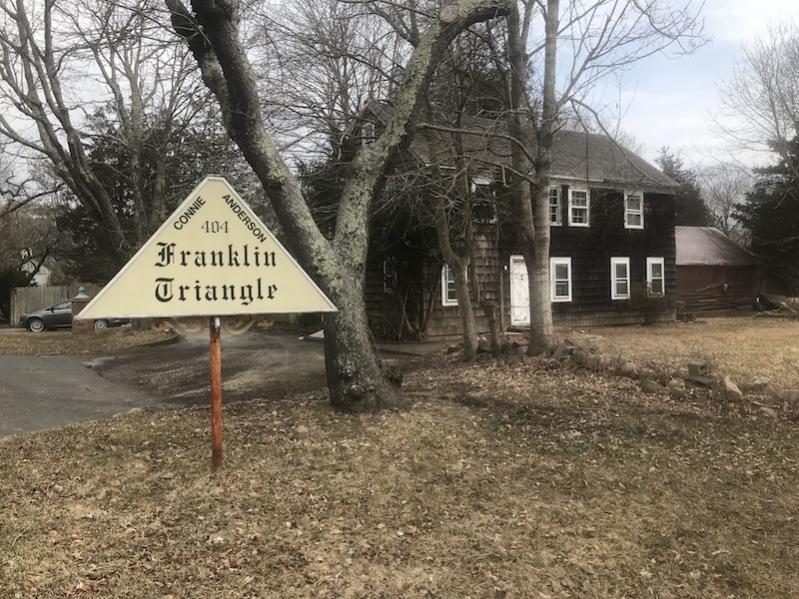 At the property known as Franklin Triangle, the owners of Brass and Burl want to connect a house and barn to create a 2,500-plus-square-foot retail space.
By Jamie Bufalino

The owners of Brass and Burl, an online store for high-end furniture and home décor, are planning a showroom on part of the Franklin Triangle, a wedge-shaped property between Skimhampton Road and Montauk Highway in East Hampton.The property at 404 Montauk Highway contains a two-story residence and a barn, which the owners, Emily and Adam Young, propose to connect by a passageway and convert into a more than 2,500-square-foot retail space. Also proposed for the property are a parking lot for 15 cars adjacent to Skimhampton Road, a garage, and a low-nitrogen septic system. The Youngs are seeking site plan approval from the East Hampton Town Planning Board.The property is part of a subdivision created in 1974. The owner at the time, Connie Anderson, a real estate agent who lived and worked on site and whose name appears on a sign in front of the parcel, received permission from the planning board to create four lots in return for a one-foot scenic easement that encompasses the perimeter except for four access points. Appearing before the planning board on March 13, Britton Bistrian, a land-use consultant who represents the Youngs, said her clients intended to use the space primarily as a gallery for Brass and Burl products, not as a fully operational furniture store. “No significant inventory will be stored on site,” she said. “Small items will be available for purchase, while larger items will be shipped directly to customers’ residences.”As for the existing structures, the intent, she said, is to shore up the foundations on each, and to retain as much of the buildings as possible. Ms. Bistrian provided an email from Mr. Young, in which he described his vision for the interior of one of the buildings. “The old barn will be updated to become the perfect summer game room, featuring a stunning reclaimed wood and leather Ping-Pong table, finely crafted bar cabinets, and lounge chairs,” he wrote.The proposed 432-square-foot garage, Ms. Bistrian said, would be used for a delivery van, and to store small products. An existing access to the site from Skimhampton Road would be eliminated, she said, but an entryway from Montauk Highway on the east side of the residence would remain. Eric Schantz, a senior planner for the town, pointed out that the latter access point appears to traverse the easement. He recommended creating an access road on unencumbered land to the west of the building. Such a road, he said, would also accommodate parking along the building, and reduce the number of spaces needed in the proposed lot.Tiffany Scarlato, a lawyer representing the Youngs, disputed that the existing entryway violated the easement. She said the access from Montauk Highway had been established at the time of the subdivision. Board members asked Ms. Scarlato to provide documentation supporting that assessment. Kathy Cunningham, the vice chairwoman, and her colleagues Sharon McCobb and Ian Calder-Piedmonte recommended moving the proposed parking lot farther away from SkimhamptonRoad, a residential neighborhood. At Mr. Schantz’s suggestion, the board also encouraged the applicant to include an affordable housing unit in the site plan.Ms. Bistrian said her clients were open to the idea, and that a second-floor apartment could be added to the proposed garage.