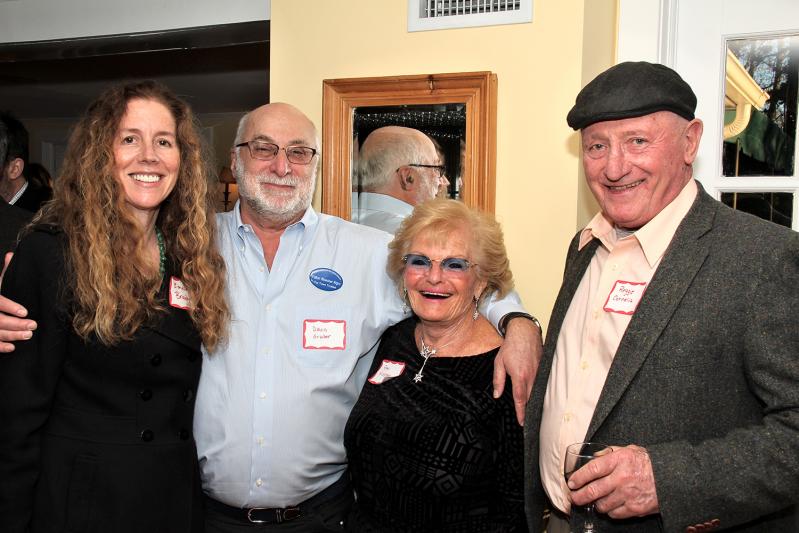 On Saturday at the Hedges Inn, the East Hampton Town Republican Committee hosted candidates from multiple parties united as the EH Fusion Party to take on incumbent Democrats in the Nov. 5 election. From left: Bonnie Brady, David Gruber, Rona Klopman, and Reg Cornelia.
By Christopher Walsh

Undaunted by the failure last month to place several candidates on the Republican Party ballot in the Nov. 5 election, members of the East Hampton Town Republican Committee, the East Hampton Independence Party, and the East Hampton Reform Democrats are moving to formalize the unity ticket they hoped to create by forming the EH Fusion Party. A campaign to gather signatures on an independent nominating petition for the EH Fusion Party was launched last weekend. The nascent party’s slate includes David Gruber, the Independence Party’s candidate for supervisor and a leader of the Reform Democrats, which he describes as a caucus within the Democratic Party, at the top of its ballot. It also adds a new name to the group that seeks to unify candidates across political parties and puncture the East Hampton Town Democratic Committee’s 5-0 Democratic supermajority on the town board and 7-2 majority on the town trustees: Simon Kinsella, a Wainscott resident who has been a persistent critic of the proposed South Fork Wind Farm and more recently an advocate for the installation of a filtration system in Wainscott Pond to combat harmful algal blooms there. Registered voters in East Hampton who did not sign any other nominating petition this year are eligible to sign the EH Fusion Party’s petitions. “This serves the function of getting us all in one place, or at least on one line,” Mr. Gruber, who regularly offers withering criticism of the present town board, said on Monday. He screened for the Republican Committee’s nomination for supervisor and expected to be on its ballot, but that effort was unsuccessful as Jesse Garcia, the recently named Suffolk County Republican chairman, did not sign the Wilson-Pakula documents authorizing a candidate not registered with the party to run as its candidate. “Obviously, it’s taken on additional importance, in light of the fact that we’re not all on the Republican ballot line,” Mr. Gruber said of the EH Fusion party. “We’re working very closely with the East Hampton Town Republican Committee and the East Hampton Independence Party. We are in this together, they’ve made it clear. The Fusion Party is a combined effort of the Town Republican Committee, the Independence Party, and the Reform Democrats.” Should it collect the required signatures, submit its petitions by the May 28 deadline to file independent nominating petitions, and withstand any challenges to their validity — the latter a recent tradition among the town’s rival political parties — the EH Fusion Party ballot would include candidates for various town offices along with Mr. Gruber and Mr. Kinsella. They are Bonnie Brady and Elizabeth Bambrick for town board; Susan Vorpahl, Dell Cullum, Stephen Lester, David Talmage, Michael Havens, Fallon Bloecker-Nigro, Rona Klopman, and Rick Drew for trustee; Stephen Lynch for superintendent of highways; Jill Massa and Jeanne Nielsen for assessor, and Lisa Rana for town justice. The Independence Party has endorsed all of them. Ms. Brady, Ms. Bambrick, Mr. Cullum, Mr. Lester, Ms. Klopman, Mr. Drew, and Ms. Nielsen were also left off the Republican ticket, but will appear on the Independence and Conservative Party lines. The Reform Democrats are also contesting the Democratic Party’s nominations for trustee, and have fielded candidates who will compete in a June 25 primary election. Mr. Gruber will face Supervisor Peter Van Scoyoc, who is seeking a second term. Ms. Brady and Ms. Bambrick will challenge Councilwoman Sylvia Overby, who is seeking a third term, and Councilman David Lys, who was appointed last year to fill Mr. Van Scoyoc’s seat on the board following his 2017 election to supervisor. Mr. Lys defeated Manny Vilar, his Republican challenger, last November to complete Mr. Van Scoyoc’s term. He is now running for a full, four-year term on the board. Mr. Vilar is now chairman of the Republican Committee. The town board’s other two members, Kathee Burke-Gonzalez and Jeff Bragman, are not up for re-election this year. “We’ve always been committed to the ‘fusion’ effort,” Kyle Ballou, the Republican committee’s secretary, said on Monday. “Our little hiccup” — the failure to obtain Wilson-Pakula authorizations — “happened, so this is the route we’re taking. We are working with this Fusion Party and supporting the candidates. We remain committed to the Fusion slate, and will work alongside them to get our endorsed slate of candidates in office.”“It will be an interesting year,” Mr. Ballou said. “Unfortunately, the Republican slate will be a little bare, but we’ll have our candidates on the other lines and we’ll take it from there.” Emails sent to Mr. Kinsella on Monday and Tuesday seeking comment had not been answered as of yesterday afternoon.