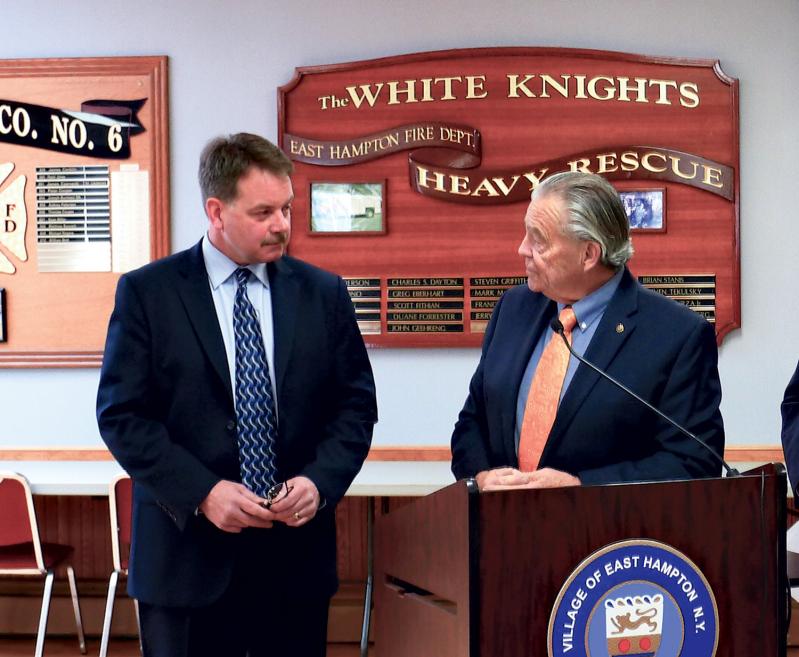 Jerry Larsen, a former East Hampton Village police chief, has announced his intention to run for mayor of the village in 2020. Mr. Larsen is the first person to declare candidacy for the position, which has been held by Mayor Paul F. Rickenbach Jr. since 1992. “I believe this next election is a turning point for the future of our village,” Mr. Larsen says on his campaign website, jerrylarsenformayor.com, where he sets out the key issues on which he will focus. First on the list is a proposal to impose term limits on future mayors and members of the village board, capping their terms of office at 12 years. His other priorities include installing a centralized sewer system in the commercial district, which would allow for new businesses to open; improving beach conditions with twice-a-day cleanups; burying the power lines on McGuirk and King Streets, and updating the village code and its comprehensive plan. Mr. Larsen, who lives on Newtown Lane, grew up in the village. He served on the police force for 34 years, including as chief for 14 years, before retiring in 2017. He made an unsuccessful bid later that year for a seat on the East Hampton Town Board. He and his wife, Lisa Larsen, own Protec Security Services, which provides property management and security for residential and commercial buildings.In August 2017, the company filed a federal lawsuit against Mayor Rickenbach and Richard Lawler, a member of the village board. The suit claimed that the mayor, who is also a retired village police officer, and Mr. Lawler, the village’s police commisioner, abused their positions by prohibiting Mr. Larsen from taking outside security jobs in the village, although they themselves were engaged in businesses that provided similar services. The suit was dismissed in September, the judge citing the statute of limitations.On his website, Mr. Larsen, who will run as a member of the NewTown Party, said he is starting his campaign over a year before the June 2020 election because he wants to meet every single voter in the village, including seasonal residents, and “have a conversation [about] how I wish to move our little slice of heaven forward.”